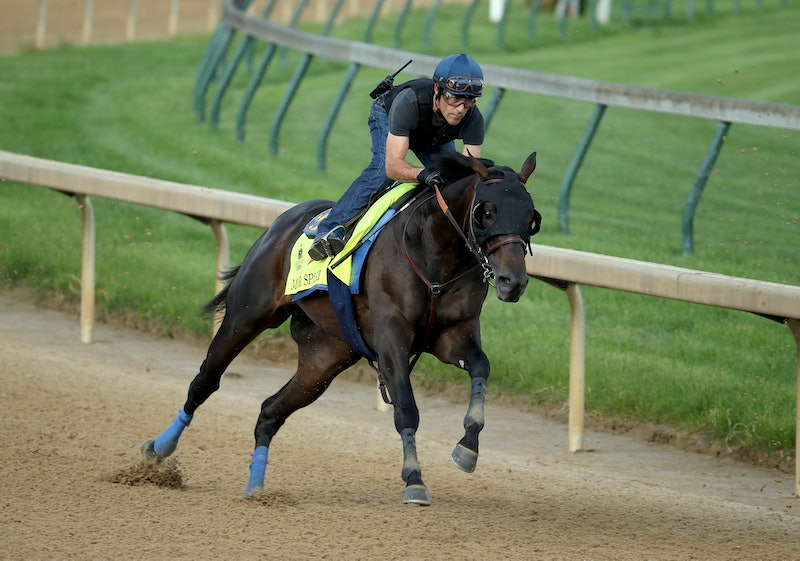 It's that time of year again — the Kentucky Derby will take place on Saturday, May 7, to the delight of horse racing fans around the country. This will be the 142nd Derby, and 20 horses made the cut to compete in the race at the historic Churchill Downs track. Are there any female horses in the Kentucky Derby?

The horses in the top 20 list are all colts — young male horses. No "fillies," or young female horses, will be competing in 2016. This is not unusual, although there's no written rule that female horses can't participate. In fact, only 39 fillies have ever competed, and only three have actually won the Derby, according to About.com. Although there is no shortage of female race horses out there, and they are allowed to participate in the Derby, most fillies stick to the Kentucky Oaks, a race that is held specifically for 3-year-old fillies on the day before the Kentucky Derby.

Why does the Derby tend to be a de facto colt's club? For some insight, we can turn to equine director at the California Horse Racing Board, Rick Arthur. Arthur told Los Angeles Times:

Day in and day out a colt is heavier and more able to withstand the rigors of training at that age. Fillies don't really catch up [with colts] until near the end of their 3-year-old career.

In order to compete in the Kentucky Derby, a horse can be no older than 3 years old. So, while Derby rules don't officially bar female horses from participating, they do discourage it. The Kentucky Oaks race lasts for 1-1/8 mile, which is more manageable for most fillies at that age than the 1-1/4-mile Derby.

Rick Porter, owner of 3-year-old female race horse Songbird, told Los Angeles Times that he was running Songbird in the Oaks race rather than the Derby because "[i]t's asking too much of her at her age to do it." Though he said that past experience didn't factor into this decision, it's worth noting that Porter was also the owner of Eight Belles, a filly that placed second in the 2008 Derby only to tragically break her ankles just beyond the finish line. Eight Belles was euthanized.

If you want to watch female horses race, the Kentucky Oaks on Friday is where you'll want to look. The Derby is a colts-only affair in 2016.