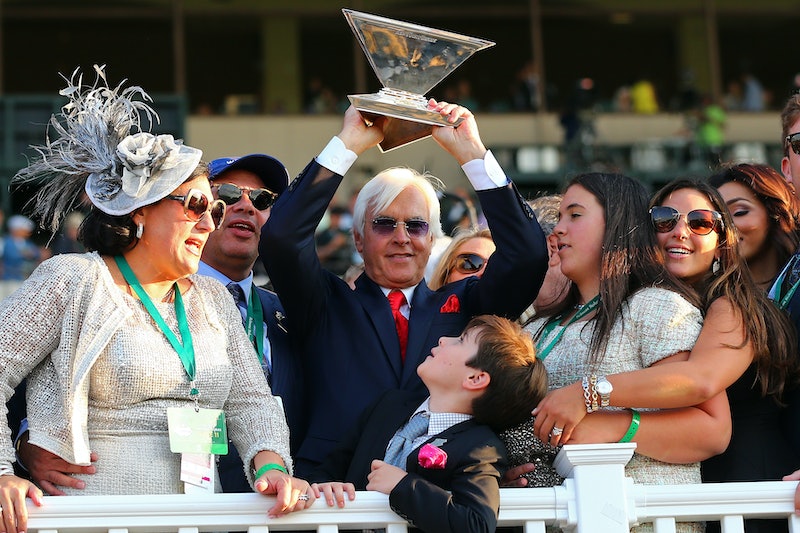 Touted as being "the greatest two minutes in sports," fame for the horses, jockeys, and trainers in the Kentucky Derby can take off and end as quickly as the race itself. But during last year's derby, trainer Bob Baffert found himself at the center of a media frenzy that extended far beyond the horse race world. Since securing a historic win in 2015 with his horse American Pharaoh, he has been keeping things a little more low key. So in gearing up for next weekend's big race, it's worth asking: What is Kentucky Derby king Bob Baffert up to now?

Without expectations for the same showstopper he had in 2015, Baffert is entering this year's race with a more easygoing attitude. Last year, there was a lot on the line — the trainer had the top two favorites of the derby, one of which was favored to win the coveted Triple Crown. This title is incredibly difficult to get, as it's only awarded to three-year-old thoroughbred horses that win the Preakness Stakes, Belmont Stakes, and Kentucky Derby. Since Baffert's win last year, no horse had snagged the title since 1978. But the trainer took off after winning the crown, getting interviewed by the likes of TMZ and asked to co-host ESPN's College Game Day show.

Now, Baffert's presence at the derby creates an excited buzz, but without all of the accompanying pressure. He'll be competing on Saturday with his horse Mor Spirit, a three-year-old colt that has shown consistency, but not the same caliber associated with American Pharaoh. His chances of placing high in the derby aren't outrageous, but a win is unlikely, and wouldn't carry the same weight as the previous year's Triple Crown.

Without a top contender in the race, Baffert has been given more time to reflect on 2015's historic win. Last weekend, the trainer got to officially commemorate the moment, as American Pharaoh was honored with an exhibit at the Kentucky Derby Museum. Before attending the ceremony, Baffert even traveled to the farm where American Pharaoh is kept, bringing a helping of the horse's favorite organic carrots along with him. They shared one last celebratory cheers over carrots before the big race starts all over again on Saturday.

Baffert's reflection marks an important moment in horse racing, as the exclusive world was pushed further into mainstream sports. But at 63 years old and with additional horses to train, Baffert shows no real indication of slowing down just yet.

More like this
What DeLeesa Has Been Up To Since Her ‘Circle’ Win & How A Bet Brought Her Back
By Gretchen Smail
Chelsea Woody On Shattering Stereotypes In Surfing
By Leah Groth
What Is Jeanie Buss' Net Worth? The Lakers President Is Uber Rich
By Hugh McIntyre
Jake Daniels Just Became The UK’s First Active Football Player To Come Out As Gay Since 1990
By Sam Ramsden
Get Even More From Bustle — Sign Up For The Newsletter