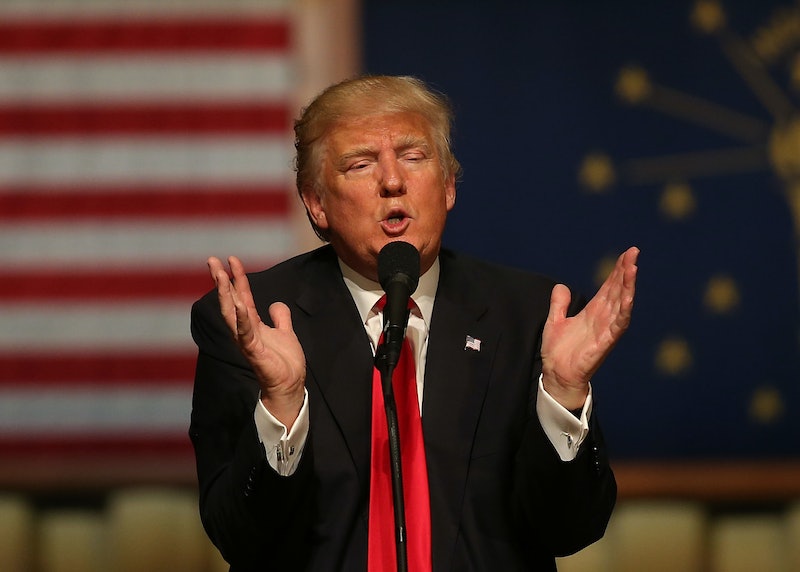 Six months out, according to the polls, Hillary Clinton is on track to defeat Donald Trump by seven points in the general election. That's the size of her current lead, at least, and even if her lead gets cut in half over the course of the campaign, she'll still be on track to become the next president of the United States. But what if the Donald closes the gap completely? Is it possible that Donald Trump could catch up to Hillary Clinton between now and November?

Well, yeah, it's possible. Anything is possible! It is not, however, likely. Trump's chances of pulling even with Clinton and fighting her to a popular vote tie (or even defeating her) are very small. We know this because of history: In past election, candidates with this big of a lead at this point in an election don't tend to lose.

The data comes courtesy of two different analyses, one of which builds on the other. The first is The Timeline of Presidential Elections, a 2012 book by political scientists Robert Erikson and Christopher Wlezien. The two found that since 1952, polls taken by mid-April or later have a correlation coefficient of about 0.5 with the ultimate results; in plain English, this means that the current crop of polls tells us "about half the story," in Wlezien's words, of who's going to win in November.

Sam Wang of the Princeton Election Consortium took this research one step further, and looked at the actual amount of variation between the polls and the final election results. His analysis is quite technical and involves several concepts that will be confusing to the non-mathematically-minded (such as myself), but the question he was asking is simple: What is the likelihood that a candidate with a 7-point lead in late-April will end up losing the election?

This is the part that ought to make Democrats happy: According to Wang, Hillary Clinton has a 91 percent chance of retaining her lead over Donald Trump for the rest of the election. Those are pretty damn good odds.

There are some caveats, of course. For one, this analysis addresses only the popular vote, not the electoral college. Second, as Wang notes, the predictive power of general election polls actually decreases at points in the election, so these odds aren't static and will change as the election proceeds. Nevertheless, these numbers are unambiguously good for Hillary Clinton, and unambiguously awful for the Donald.