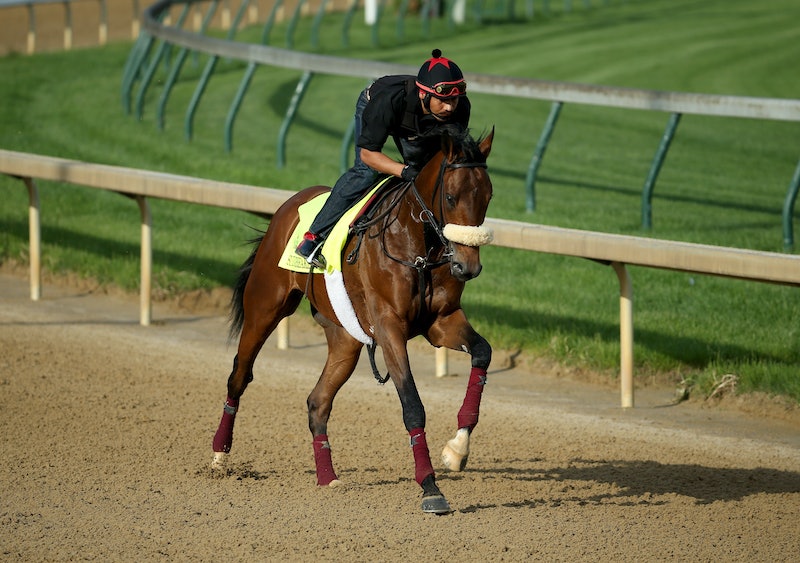 As May 7 swiftly approaches, the Kentucky Derby is closer to making its annual viewers and attendees very happy — or very upset, depending on what transpires come the big day. Betting is a popular pastime for some Americans, and the performances of these horses will make or break some bank accounts and some hearts. Whether it's California Chrome, I'll Have Another, Super Saver, Animal Kingdom, or any other strangely-named steed, both pride and disappointment are conventional themes at this famous event. As for 2016, who are the favorites at the Kentucky Derby rumored to reign superior to other racehorses?

According to the official Kentucky Derby website's leaderboard, Gun Runner — and jockey Florent Geroux — are currently ranked at number one to win the headlining race of the derby. The team carries 151 points — which are only awarded to the top four finishers in each race, and finished first in four out of their last five races, including the Twinspires.com Louisiana Derby and the Veterans Ford Risen Star Stakes. Expectedly, plenty of folks will place their wagers on this dream team.

Some other closely-ranked horse and jockey teams are Nyquist, who is ranked number two on the leaderboard, along with jockey Mario Gutierrez. This team has 130 acquired points and has ranked number one in all seven of its last seven races. Wow.

Ranked at number three is Exaggerator and jockey Kent J. Desormeaux, who together carry 126 total points and four first-place wins. As is evident, the field of competitors is strong, and that's omitting the other 13 smaller-scale races that will occur throughout the day. There are some truly talented teams out there.

Experts on the subject also provided their own views for the potential winners of both the Kentucky Derby and the Kentucky Oaks, the latter of which is a race for three-year-old fillies, or female horses, held this year on May 6.

The past derby winners in recent years were American Pharoah and jockey Victor Espinoza — in 2015, California Chrome and the same jockey Victor Espinoza — in 2014, Orb and jockey Joel Rosario — in 2013, I'll Have Another and jockey Mario Gutierrez — in 2012, Animal Kingdom and jockey John Velazquez — in 2011, and Super Saver and jockey Calvin Borel — in 2010. Borel was also the jockey who secured that sweet victory in 2009 on his horse Mine That Bird. Any seasoned viewer knows that there are a few jockeys who have made some repeat appearances in the first-place spot.