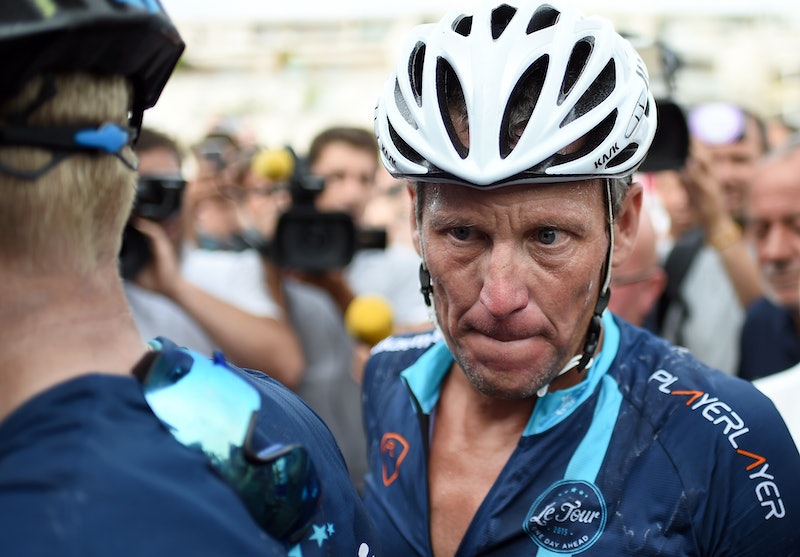 Just four years ago, the name Lance Armstrong was synonymous with professional cycling. He had won the Tour de France seven times in a row, plus Armstrong was idolized for fighting cancer through his Livestrong Foundation. And, of course, he dated Sheryl Crow. Everything changed in 2012: His titles — and reputation — were stripped away after U.S. authorities discovered "the most sophisticated, professionalized and successful doping program that sport has ever seen." Lance admitted everything to in an Oprah interview in 2013, saying his "mythic, perfect story" was "one big lie." So what is Lance Armstrong doing now?

He had retired from cycling for a second time in 2011, so when the doping charges were brought up, he was already out of the game. The difference this time is that there's currently no coming back. He received a lifetime ban from the sport's governing body — and he's not happy about it. Winfrey asked him in her interview if he was admitting to the doping allegations in an attempt to improve his image and "come back to the sport." He claims it isn't, but first Armstrong responded:

If you’re asking me, “Do I want to compete again?” the answer is “Hell yes.” I’m a competitor, it’s what I’ve done my whole life. I love to train, I love to race, I love to tow the line.

He goes on to explain what the lifetime ban from sports means. Not only can't he compete in cycling, but he's banned from any professional sporting event that is goverened by the U.S. anti-doping agency. Giving an example, Armstrong explained, "Would I like to run the Chicago marathon when I’m 50? I would love to do that and I can’t." Marathons are probably not his preferred sport.

There's lots of speculation that he'd like to try his hand at triathlons. The Wall Street Journal reported at the time of his Oprah interview that he would like to keep competing in the three-discipline sport; he began when he gave up cycling in 2011. The Journal reported that he directed his lawyers to get him back in USADA's good legal graces in order to do so.

He has vacationed at Kailua-Kona on Hawaii's Big Island, a popular destination for triathloners. The Ironman World Championship is held there every year since 1978. His Twitter feed is also full of pictures from bike rides around Austin, Spartan Races, a competition played out over an obstacle course, and other local sporting events around the country (he's allowed to participate in those).

In March he met with the head of the U.S. doping agency in an attempt to negotiate a reduced sentence. It was their first meeting since 2012 (Armstrong stormed out of that one according to reports in The New York Times). Any renegotiation of his ban would have to include "substantial assistance" from Armstrong in stopping other dopers, as well as the officials and doctors that made it possible.

Those that have been identified thus far haven't received the same tough sentence that Armstrong did. Other cyclists also remain in the sport. During last year's Tour de France, Armstrong noted that other prominent riders could still participate. "Why am I not welcome? Because I’m a doper?” Armstrong said. “If you’re going to apply a standard, it has to be universal."

He was in France during the Tour de France to raise money for a leukemia charity based in the U.K. He biked along the route of the Tour de France — ahead of the competitors — to raise money but he drew attention too. Brian Cookson, the president of the International Cycling Union, said his presence was inappropriate. He said the cause was worthwhile but "Lance Armstrong’s involvement in this ride is inappropriate.”

While negotiating a potential return to the sporting world, Armstrong is still working through the effects of the doping revelations. The sponsor of his cycling team when he was doping, the U.S. Postal Service, wants their money back. And it's a big chunk of money: $30 million, that they paid to his team from 1998 to 2004 covering six of his seven Tour de France victories. Armstrong called the case "long on speculation and hyperbole" in a motion filed last Wednesday.

When he's not flying to local sporting events, Armstrong splits his time between Texas and Aspen, Colorado. In Austin he's the owner of a coffee shop, Juan Pelota, and a bike shop, Mellow Johnny's. He and his girlfriend Anna Hansen have two children together; he has three from a previous relationship, and they've all been seen vacationing together.

He may be down, but don't count him out yet.

More like this
Jake Daniels Just Became The UK’s First Active Football Player To Come Out As Gay Since 1990
By Sam Ramsden
What Is Jeanie Buss' Net Worth? The Lakers President Is Uber Rich
By Hugh McIntyre
Rebekah Vardy & Coleen Rooney’s Trial Has Officially Begun
By Bustle UK
Lance Bass Says This Workout Machine Has Changed His Life
By Kaitlyn Wylde
Get Even More From Bustle — Sign Up For The Newsletter