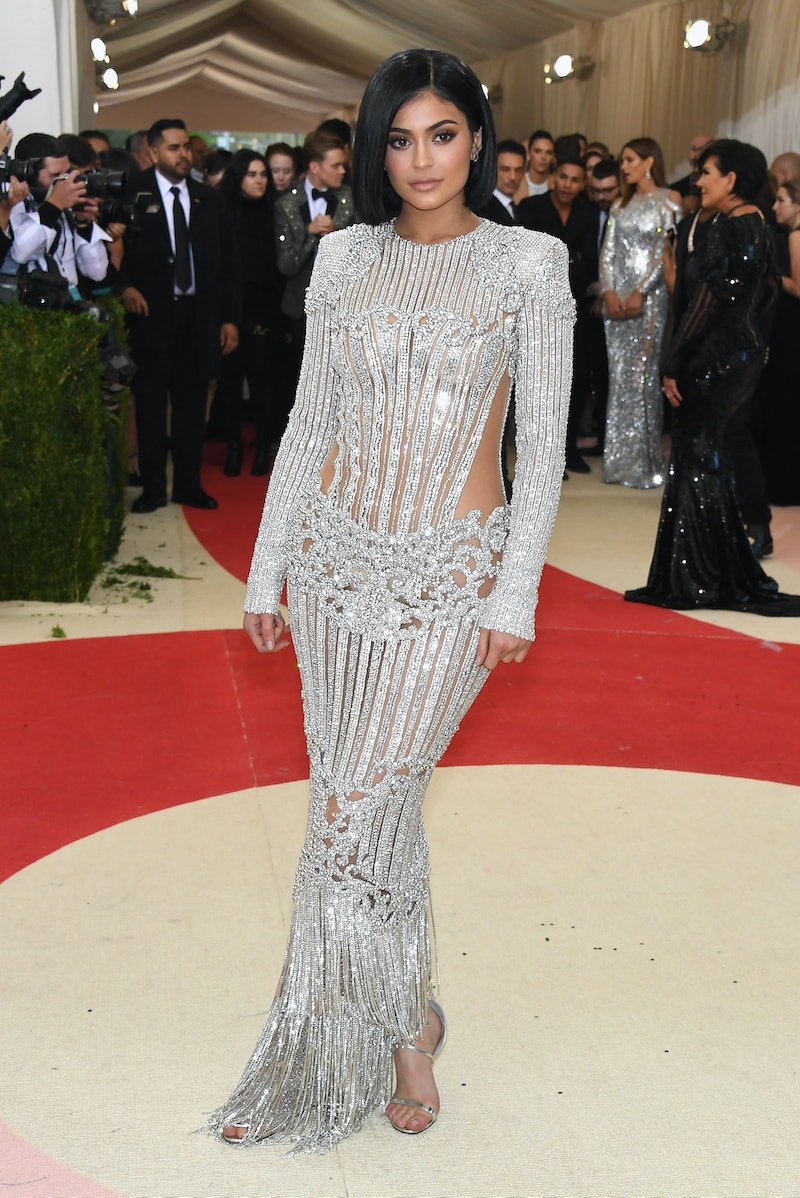 It appears as though the bob heard 'round the world may actually be real. Even with this possible hair change, one important style signature remains the same. Kylie Jenner sparkled in Balmain at the 2016 Met Gala. The designer has become a "go to" for the entire Kardashian x Jenner family, so it was no surprise that the reality star and makeup mogul opted for Balmain for her Met Gala debut. Sure, it was Jenner's Anna Wintour-inspired bob that was the most distinctive feature of her entire presentation. She showed off a chin-length, head-hugging bob with a deep side part. Of course, fans are wondering if it's real, since Jenner changes her hair color and length dramatically, drastically, and on Snapchat every other day. Well, I am further thinking the bob is the real deal since Jenner attended the 2016 Met Gala after party in another Balmain ensemble and with the bob.

I love how the post-Gala Balmain otutfit and the bob show both sides of Jenner's style personality. She sticks with Balmain since the designs and aesthetic clearly work for her. Don't get used to the bob, though! Change is always afoot with this Jenner sister when it comes to hair and makeup.

Jenner's post-Met Gala outfit was shorter and sexier, but it boasted similar statement, squared off shoulders and cutouts.

She paired the ensemble with over-the-knee, nude suede boots. I mean, is it me or do those dangerous boots look like a Kylie Lip Kit color? Am I right or am I right? Let's peep Jenner's second Balmain ensemble of the evening. The post-Gala look was totally militaristic and sexy, which is the Balmain aesthetic. Jenner wears it well.

She was strutting her stuff in major boots.

ICYMI, Jenner sparkled in this long-sleeved, liquid metal column gown. It was one of my personal favorite looks of the evening.

The blunt bob looks real. When we're not seeing Jenner with aqua, mermaid locks or butt-length black strands, she usually rocks mid-lento, thick, raven strands. This coif is in keeping with what I *think* is her natural color and texture.

If I were to make a wager, I'd bet that the bob is real. But I'd also bet that the bob's days are numbered and she'll be switching things up during her next Snapchat sesh or before the next Lip Kit restock.

One last look at da bob! It's such a flattering look for Jenner. I hope she keeps it for more than week before resorting to one of her beloved wigs. The bob is tres sophisto.

More like this
7 Comfortable Headbands, According To Amazon Reviewers
By Scarlett James
Here Are All 703 Outfits Rachel Wore On Friends
By Kat George
Jenna Ortega's Hair Routine Occasionally Involves Washing Out Fake Blood
By Olivia Rose Ferreiro
Hailey Bieber's Best Hair Moments Of 2022
By Audrey Noble
Get Even More From Bustle — Sign Up For The Newsletter