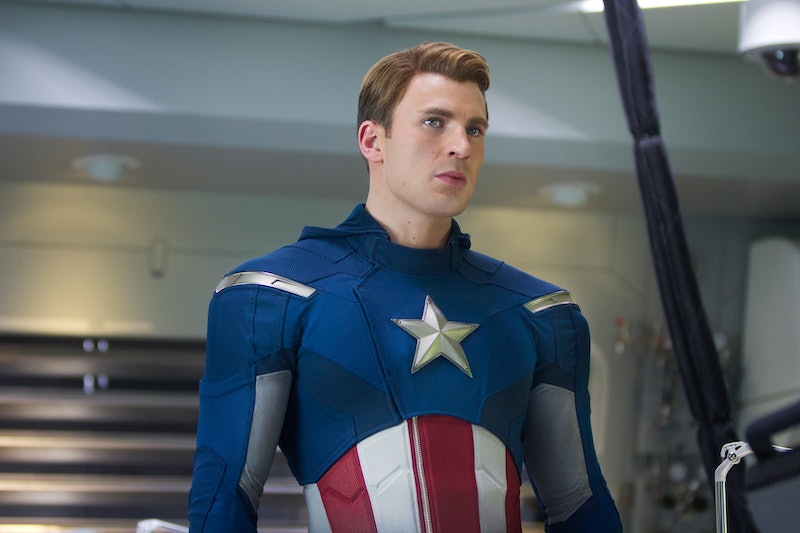 If you're a Captain America fan, you've probably been loving the superhero's prevalence in recent movies. Chris Evans first portrayed the Marvel character in 2011 in Captain America: The First Avenger, and since then has also appeared in The Avengers, Captain America: The Winter Soldier, and Avengers: Age of Ultron. On May 6, the hero hits the screen once again in Captain America: Civil War. That's a lot of superhero flicks to keep up with, so you might have the idea to marathon the Captain America movies on Netflix one of these days. But before you go to line up your movie marathon, there's something you should know.

There is technically one Captain America movie on Netflix, but it's not one from the Evans-starring series. The available movie is called Iron Man and Captain America: Heroes United, and it's a 2014 direct-to-video animated movie from Marvel. Similarly, there are a few Avengers movies on Netflix, but none of the recent ones from the Marvel Cinematic Universe. So if you're trying to search for any of the new Captain America movies, you'll end up with the dreaded prompt "Explore Titles Related To:."

But although they aren't on Netflix, you would actually be surprised just how many Captain America adaptations there are. Here are some of the most famous ones from before Evans' stint as the superhero.

This 1944 adaptation of the comic book is a serial film, meaning that it's a series of short films that were once shown in theaters alongside a feature. The movie is made up of 15 parts, for a total runtime of over four hours. The special effects are just slightly different from those of the recent MCU adaptations.

The title of this 1973 Turkish cult film translates to "Three Giant Men," with the dudes in question being Captain America, El Santo, and Spider-Man. In the film, Captain America and Santo team up to defeat an evil Spider-Man. If you couldn't guess, this movie is a drastic departure from the way the characters are depicted in the Marvel comics.

This made-for-TV movie stars Reb Brown as the eponymous superhero. The story is loosely based on the comic books, and focuses on Steve Rogers' transformation into Captain America after being injected with the experimental "FLAG" serum.

This sequel aired on CBS later in the same year as the original. Its storyline revolves around Captain America's battle with the evil General Miguel.

In this 1990 feature film, Captain America is frozen in ice during World War II and isn't discovered until 50 years later. Upon his re-emergence, he has to once again save the day by battling his old nemesis the Red Skull.

So even though Cap has gotten a particularly large amount of screentime over the past five years with his MCU appearances, he has actually been pretty prevalent in cinema since the mid-20th century. Each adaptation takes a slightly different spin on the Marvel comics story, so if you're a fan of the superhero, you definitely won't be bored as you watch them all. Then, you can go see Captain America: Civil War and fully appreciate the breadth of the superhero's journey over the past 70 years.

More like this
These 25 International Horror Movies On Netflix Prove Fear Is A Universal Language
By Bustle Editors
What’s New On Netflix: Ana De Armas’ 'Blonde' & A Nick Kroll Special
By Arya Roshanian
Everything You Need To Know About The 'Knives Out' Sequel
By Bustle Editors
A New Scooby-Doo Movie Confirmed Velma Is Gay & Twitter Is Pumped
By Radhika Menon
Get Even More From Bustle — Sign Up For The Newsletter