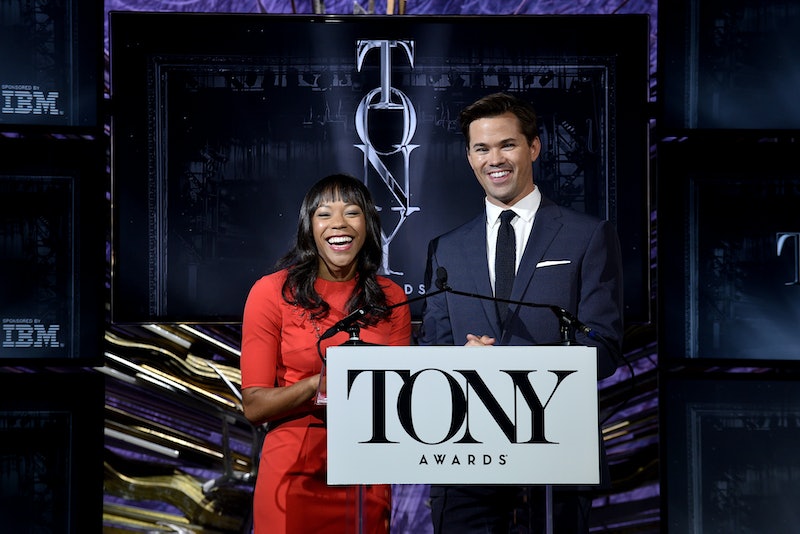 They're here. On Tuesday, The Book of Mormon alums — Andrew Rannells and Nikki M. James — announced all the nominees for the 2016 Tony Awards. The list is just as exciting as ever, highlighting some of your favorite theatrical productions from the 2015/2016 season. And for those of you wondering whether or not Hamilton would sweep the Tony noms, well here's your (probably not surprising) answer: it did. The hip-hop musical phenomenon about Founding Father Alexander Hamilton nabbed a total of 16 noms, setting a record for most nominations picked up by a musical in Tony's history.

But, who else cleaned up? Shuffle Along, Or the Making of the Musical Sensation of 1921 and All That Followed came in just under Hamilton nomination-wise, with a total of 10. There's also the possibility that some of your favorite Hollywood A-listers — and even musicians — will snag a statue. Notable actor/actress noms include Lupita Nyong'o for Eclipsed, Michelle Williams for Blackbird, and Sara Bareilles for the music in Waitress . Get ready to watch these talented stars and more pick up some accolades for their work when the Tony Awards airs Sunday, June 12 on CBS.

Alright, enough talk already. Peep the 2016 Tony Award noms below — and if you're a Hamilton fan, rejoice.

Best Revival of a Play

Best Revival of a Musical

Bright StarHamiltonSchool of Rock — The MusicalShuffle Along, Or the Making of the Musical Sensation of 1921 and All That FollowedWaitress