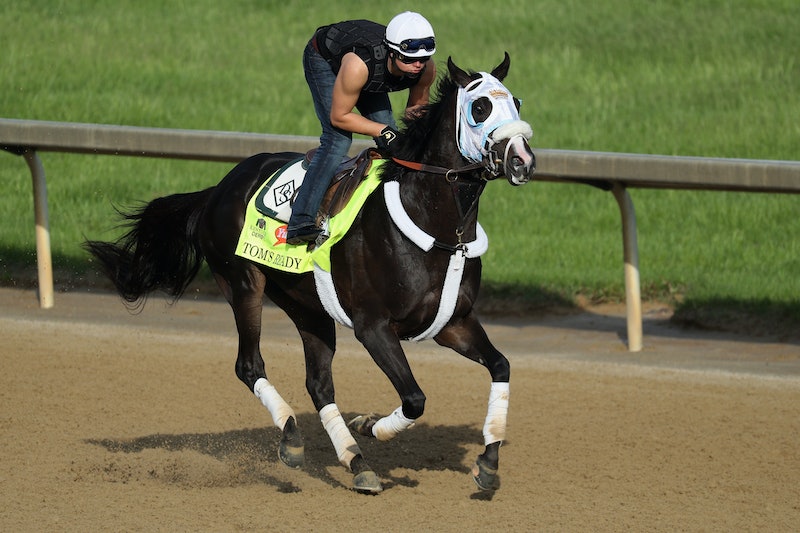 The Kentucky Derby is on Saturday, and it's time to get excited about the part of the race that's arguably even more entertaining than the spectators' hats: the racehorses' names. Even horse racing novices can't help but be enthralled by the bizarre names given to the Derby contestants, and this year's expected Kentucky Derby champion is named Nyquist. Nyquist is a 3-year-old thoroughbred, and CNBC reported he is named after Detroit Redwings hockey star, Gustav Nyquist. OK — cracked the code on that name.

Nyquist may sound like a strange name to those who don't follow hockey, but trust me, Nyquist is the horse equivalent of Bob — it's a completely mundane and understandable name in comparison to his competition. For example, Nyquist will be competing against Mohaymen and Shagaf. Where do these names come from?

NPR explained that there are some rules that help determine these bizarre monikers, but most racehorses are given strange names simply because that's the way its been done for a very long time (the first Kentucky Derby was held in 1845). One of the rules that determines the Kentucky Derby racehorses' names states that no two horses' names can sound the same. This can be a difficult task when there are 450,000 registered names on the official Jockey Club register, and it may explain the name Shagaf — what other name could possibly sound similar?

Still, all of the Kentucky Derby contestants' names leave me guessing — they just make zero sense:

Be aware, this ranking is done on the basis of name-strangeness, and has nothing to do with the expectations for how the horses will place in the Kentucky Derby.

Yeah, I have no idea. Who's Tom? Where does the Mo come from?

Like I said, this name is only explicable when the whole "no two names can sound the same" rule is taken into account. But it still makes no sense.

Was it supposed to be "Dancing Candy?" That would be slightly less nonsensical.

I guess this horse will be out of work if he doesn't do well at the Derby... Sorry, I didn't have anything else.

If he wins, for sure.

Not to be confused with Mo Tom. Still unclear as to what Tom's ready for, but hopefully it's to gallop around in circles as quickly as possibly.

Since Mo Tom was already taken, Mohaymen was obviously the only other choice.

All I'm thinking is the Trojan Horse — remember learning about that in fourth grade?

Now, Destiny would have made sense. Did they just forget the "y"?

The real question is, did he win? How was the speech?

Not sure who Brody is, but I certainly hope he has an admirable cause.

I've got nothing. Maybe he's majestic? No, because then he could be named Majestic.

I'm assuming he runs as soon as the gun goes off. Isn't that a requirement?

My personal favorite — it has a nice ring to it, even for those of us unacquainted with Sam.

Again, this has to be due to a spelling error. More Spirit would actually be a pretty super name.

Apparently Lani means "heaven" in Hawaiian — OK, I dig that.

It's a strange day when Nyquist is one of the more normal names.

Quite a holy name to live up.

The star of Downton Stables — the newest Downton Abbey spinoff!

I wasn't lying when I said racehorse naming makes no sense. These names are just too good to make up.