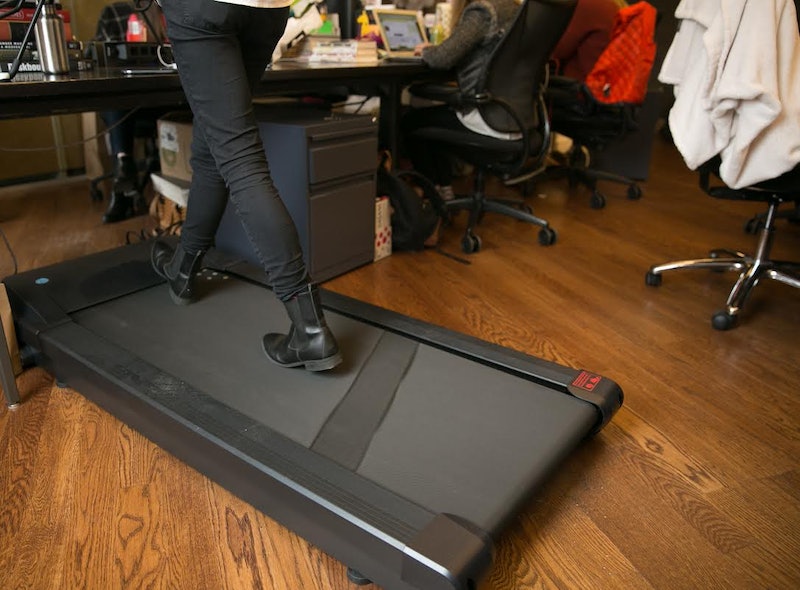 As I type this, I'm walking at a speed of two miles per hour. This isn't anything unusual for me lately, because over the last month, I have been walking every day at around this pace, usually for at least three to four hours a day. I guess that means I'm now walking a minimum of five miles a day on the LifeSpan treadmill desk, though I've decided not to keep track of that. I also don't keep track of how many calories I burn — because it feels too potentially triggering for me to equate calories with my health, and also because that's not why I'm using a treadmill desk. I'm just walking at work because it feels good. In fact, it feels amazing.

Though I've always felt restless in offices — I was the first at Bustle to get a standing desk, and can constantly be found getting up and down, sitting on the floor, etc. — I didn't have the opportunity to try a treadmill desk until LifeSpan offered to let me test one out for a month. And at the risk of sounding downright evangelical, it's changed my life. No joke.

Over the past month, I've noticed a lot of changes in my life that seem to have stemmed from switching from a standing to a treadmill desk. Some are physical, some are emotional, and most fall somewhere in the overlap, because that's the way health works — something I was starkly reminded of over the past month.

1. I Stopped Dreading The Office As Much

I don't dislike my job, but I hate offices. They make me feel claustrophobic and restless. I'm happiest and most productive at home, where I can move any way I want, go outside for breaks, and even exercise during lunch. Unfortunately, my job likes me to be in the office, which has been, at points, straight-up depressing for me. We have about the nicest, most interesting office you could hope for, but make me go to any room indoors every day, and I will feel caged.

When I started walking, it was like I moved from black-and-white to color. I was smiling and — weirdest of all — sometimes even looking forward to going into the office. In some ways, seeing how much happier I was with the treadmill desk made me feel even more like a hamster who was just glad to finally have a wheel. But, by and large, I just felt better at work. I'll always prefer to work almost anywhere but an office, but if I have to be in one, this is definitely the most human I've ever felt.

2. My Back Stopped Hurting

Before the treadmill desk, my back was beginning to hurt every day. It was bad; no matter what I did — standing, sitting, stretching, laying down — I was in pain. I was even going to an acupuncturist and chiropractor to try to address it. While they helped me, within a week of using the treadmill desk, the pain was gone, and I was able to stop going to the doctor.

LifeSpan President Peter Schenk tells Bustle that his company's survey of the effect of treadmill desks found that roughly 89 percent of users acknowledged at least one health benefit associated with walking while working. "Immediate health benefits were highlighted by reduced back and joint pain, increases in alertness, and weight loss," the survey states. Apparently, my improvement isn't unusual — and it makes sense why. Walking is known to help back pain, and being stationary is known to worsen it. "I know if I just stand [or sit] for eight or nine hours a day, my back hurts," Schenk adds.

3. I Became Closer With My Manager

Just a few days into walking on the treadmill desk, I was feeling more emotionally expansive. All those endorphins were doing me good, and I was getting new ideas all over the place. One day, I even came home and emailed a letter of thanks to my manager, and suggested we take our weekly meetings outside, since I know she also is a walker. I think she appreciated the gesture, and over the month, I found it easier to stop reacting defensively to any attempt to check in with me, and to even feel receptive and appreciative of her help. Because my body felt less closed off, I did too.

4. I Actually Wanted To Get Up Early To Exercise

This was the most baffling side effect of all. It seems that moving more during the day at work made me eager to actually get up and exercise in the morning, something I've been failing to do for... well, forever. But when I started using the treadmill desk, the weirdest thing happened: I was able to fall asleep earlier (likely because I was tiring myself out more), and actually get up, by choice, at 6:30 a.m. or 7 a.m. to make coffee and run. I was also even putting more care into getting dressed in the morning, because I wasn't just running out the door anymore.

I had more physical energy in the morning and throughout the day, because I was living a more active lifestyle at work. It was so awesome I was almost jealous of my new self, as if she was a stranger.

Because I knew I would at least be walking during the day, I didn't start to feel like crap if I missed more intensive cardio for more than a few days in a row. Usually, I would have trouble sleeping and start to feel sluggish and depressed if I go more than two days without some sort of exercise, but because I was walking, that happened a few times, and I felt totally fine, because I had at least walked.

I didn't expect to see much of a physical change from walking on the treadmill — I'm not trying to lose weight, and I already do cardio 3-4 times a week (when I'm feeling into it, that is). So imagine my surprise when I started seeing my abs a bit more over the last month without changing anything else — I even got those Brad Pitt side muscles, whatever those are called!

More importantly, I felt my core get stronger. It was easier to exercise off the treadmill, and I even felt my posture improve slightly as my core supported me better.

7. I Realized Some Tasks Are Better Suited To The Treadmill Than Others

Scneck says he's found taking meetings on the phone to be one of the work tasks best suited to the treadmill. "If I'm talking on the phone and sitting now, I actually get antsy," he tells me. From there, he recommends "light typing activities" (like browsing the web, or going through email), noting that writing or filling out spreadsheets — anything that takes intensive stationary focus — can be harder.

Since I don't really have phone meetings and I work either editing or writing for most of the day, I decided to try both of those activities out. I found I was able to do most "easier" editing and writing on the treadmill, at a lower speed. The best activities for the treadmill, however, were the ones I dreaded: answering emails and pitches. If I was putting off an edit, the treadmill was a useful way to get myself into a different headspace as well. I might need to do the final reads sitting, but it literally got me going when I was procrastinating or feeling tired. Writing intensively, not surprisingly, was best done sitting.

8. I Had More Energy In The Late Afternoon

LifeSpan's survey found that most treadmill desk users reported an increase in energy, and that was definitely true for me — especially in the afternoons. On the (rarer) days where I hadn't slept well, walking also made me feel more awake, once I got myself to do it. Whereas before I might have wanted coffee or sugar during my afternoon slump, I found that getting on the treadmill gave me the energy boost I was looking for, especially when I followed a walk with a healthy snack. Which brings me to...

9. I Needed To Snack More

I'm a snacker. I already eat pretty much every hour already, so it should be no surprise that all the walking made me extra hungry. Like I said, I didn't track the calories I burned on a daily basis, because I'm personally not trying to be about that. I'm sure I was burning plenty, though, because even though I wasn't walking to the point of sweating, I was getting extra hungry. Fine by me — it just created an opportunity for more snacks!

10. I Went From Feeling Self-Conscious To Realizing My Co-Workers DGAF (And Like The Desk Too)

On the first day the desk came, I felt like a weirdo. I was worried the treadmill desk would be too loud or disruptive for our open office plan, but to my surprise, it was really pretty quiet. I was also self-conscious that I might look like an exercise freak, especially since I'm already on the thin side, and people can make false assumptions around that. I quickly realized, however, that no one was (at least noticeably) interested in judging me. In fact, when I wasn't on the treadmill, many co-workers took me up on my offer to test it out themselves, though their interest seemed to wane as the month went on, while mine remained steady.

11. I Became Panicked By The Idea Of The Treadmill Being Taken Away

I seriously can't go back to the old way of life now. Though this was supposed to be a loan for review, I will buy this treadmill desk if they try to take it back from me — and that says something, because it retails at $999. They'll have to pry it from my warm, alive hands. I know there's another way to feel at work now, and I simply can't go back to being in pain and feeling restless.

If you're thinking a treadmill desk sounds good, talk to your HR department about getting one. It might save them sick day costs for employees in the long term, and if you have chronic back pain, you might even be able to argue that it's a necessary workplace accommodation. Either way, don't let looking like a weirdo stop you. If you love to move, or you would like to move more, no amount of money or self-consciousness should be able to get in the way of our right to feel more like humans, even if we are trapped in an office.