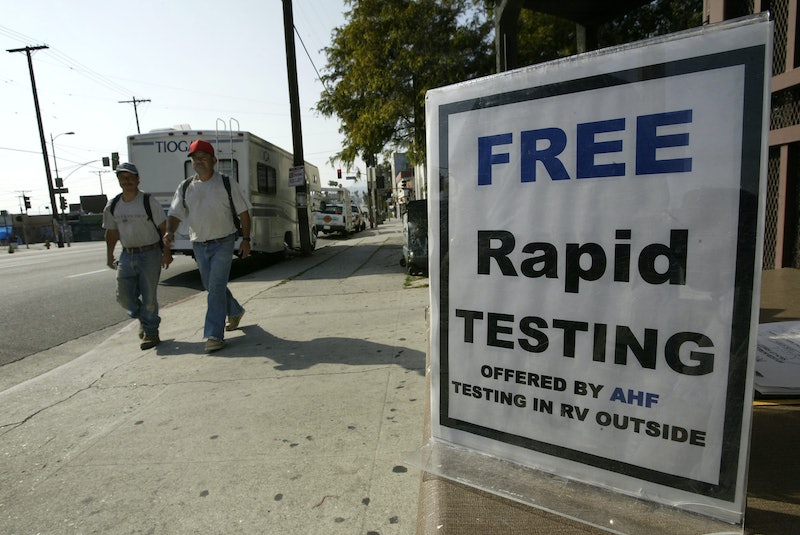 Ah, America. The melting pot of hypocrisy. We’re indulgent when it comes to sex: Marketing it commercially and packing it into primetime TV. Yet, when it comes to the consequences of sexual activity — namely sexually transmitted disease — we assume an air of condescension. STDs are relegated to the reckless, dirty, and whorish. They don’t happen to good, careful people, right? This is the cultural attitude that precludes people from getting tested — both the sense of being above disease as well as a subconscious fear that something might just come up.

But, if statistics reveal anything, it’s that this folly is unacceptable. The Center for Disease Control and Prevention's new estimates show that there are about 20 million new infections in the United States each year. In addition, CDC published an overall estimate of the number of prevalent STIs in the nation. Prevalence is the total number of new and existing infections at a given time. CDC’s new data suggest that there are more than 110 million total STIs among men and women across the nation.

Although young people ages 15 to 24 only constitute 25 percent of the sexually experienced population, we suffer the brunt of these infections. CDC estimates that half of all new STIs in the country occur among young men and women.

Given the sheer prevalence of STDs, one would think that regular testing would be a social norm. But still, the act remains taboo. It may become a particular source of tension when it comes to romantic relationships. And it wasn't just my hunch; I asked several people if they'd ever resisted or faced resistance from a partner on the issue of STD testing.

For some, testing was not even a question so much as a ritual of adulthood.

“I've been tested before as well as my partner,” says Al, 26. “She visits the doctor regularly. There wasn't any type of resistance at all or arguments about it. It was a mature decision.”

Yet Al’s relationship seemed to be the anomaly. Cortney, 29, says, “A guy I was considering dating from another area was handsome, charming, [had] a great job and his life together. I asked him to get tested with me and he didn’t want to. So, I wasn’t interested anymore. People have to be very cautious these days. It makes you ask yourself, ‘Why is a guy with so much going on for himself single and why wouldn’t he want to get tested?’”

Roosevelt, 22, has some input. “Well, when you know you are clean without any doubts, the process of getting up early, finding a parking spot at the hospital, and dealing with doctors does take its toll,” he says. Still, he adds, “It definitely wouldn’t hurt.”

So, what's the big deal then? Cameron, 22, explains that his initial resistance stemmed from the approach of the woman he was talking to. While Cameron did agree to a test, he says, “I was asked under the assumption that I had been being unsafe and dangerous with someone else, without finding out facts or realizing the full situation. We were not together, but I still got questioned like I was being nasty or something.”

Cameron’s reaction is understandable. When we sense that we are being wrongfully attacked, we may be moved to assume an indignant stance and reject the task being asked of us. So, approach is definitely a factor to be considered.

Beyond the inherent judgment in the question, there is another psychological dynamic. “It’s awkward,” says Khyran, 22, who asked his girlfriend if she had been tested. For couples who are not solidly established and have not yet reached that level of forthright communication, it can be difficult to even broach the subject, not to speak of follow-through.

What’s more? The actual act of sitting in a clinic may foster feelings of embarrassment or shame. Adreonna, 20, notes that she confronted her boyfriend about his STD status after discovering his infidelity; she “didn’t want to get tested”.

Chelsey, 22, shares a similar story, but she went to the clinic herself after breaking up with her first partner. “After he cheated on me, going to get tested was kind of awkward. It’s something every girl needs to do but often you’re stigmatized. Sitting in that part of campus health is like a labeler.”

Still, the necessity of testing is understood.

“I know that STD testing is something that no guy wants to ever think about but it’s a joint responsibility for both parties in the relationship," says Devin, 20. "I strongly believe in getting tested before a problem even occurs, don’t wait until you feel something is wrong, do it before so you won’t have that problem.”

Chelsey, 22, agrees, “I think it’s vital to get tested before you start any new relationship, and even ending one if your partner may not have been faithful. Asking your partner may be awkward, for me it was kind of funny. Guys feel awkward and sometimes don’t understand the importance. But the right partner will understand your concerns, and will go get tested. I thought it was sweet that my current boyfriend, even though he gets frequent tests done for sports, went and got another test done after I got mine done”.

"Sweet" is one way to put it, perhaps. Really, conversation around the topic is indicative of an attitude shift that needs to happen from "sweet" to "necessary"; if you are comfortable enough to have sex with each other, you should be comfortable enough to take a test. Let's drop the stigma around testing and define it for what it really is: a responsible corollary to sexual activity.

More like this
Experts Say These 23 Things Won't Happen In A Strong Relationship
By Carolyn Steber
Are Gemini & Scorpio Compatible In A Relationship?
By Kristine Fellizar
The Most Compatible Life Path Numbers, According To Numerologists
By Kristine Fellizar
Help! My Partner Only Wants Sex Late At Night & Won’t Compromise
By Sophia Benoit
Get Even More From Bustle — Sign Up For The Newsletter