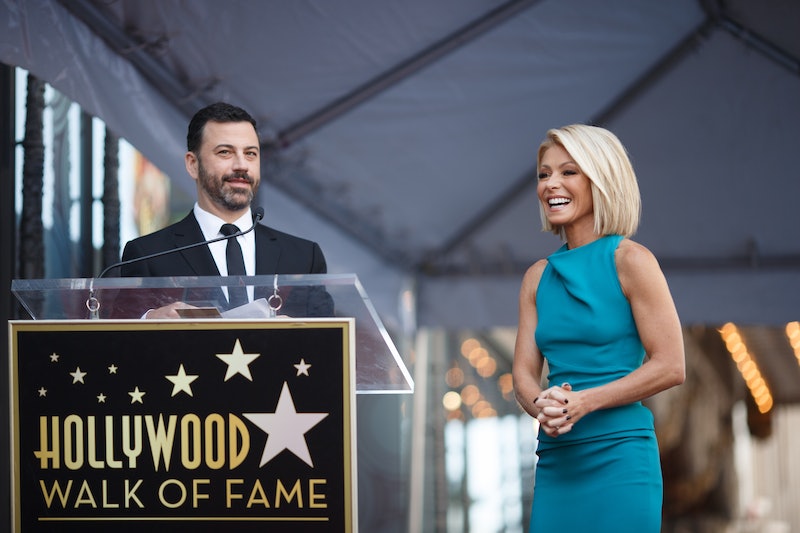 Michael Strahan is out and Jimmy Kimmel is in as Kelly Ripa's co-host on Live! With Kelly and Michael... at least for the time being. As reported by The Wrap, ABC announced on Tuesday that Kimmel will guest host Live! on May 16, and possibly longer as the show scrambles to find a permanent replacement. I'm excited about this, but also concerned at the same time. Why? Because the late night talk show host appearing live in New York means that — until further notice — he most likely won't be occupying his desk in Los Angeles for his own show. So, who will host Jimmy Kimmel Live! in the meantime? Well, personally, I'm expecting a whole lot of re-runs.

That's right. Despite the fact that his guest hosting position is only really a kind of temporary thing, the length in which he will be asked to take the hot seat has not been officially set in stone. And — with the title of Jimmy Kimmel Live! being what it is — I'm not exactly expecting someone else to fill in while he's away in New York. So, if you're used to watching Kimmel at night, set your DVR! Because you're going to have to catch a morning Kimmel instead come mid-May. And, if you happen to miss his guest-hosting job in the morning, then there's only one other thing to do: Get your Kimmel fix elsewhere. Here are just some of the great Jimmy Kimmel Live! clips from the past to hold you over while he's away.

1. When Back To The Future Traveled To Jimmy Kimmel Live!

Not only was this segment perfectly themed, but also completely hilarious.

2. When He Crashed The Batman V Superman Feud

Kimmel was basically all of us in this one. Let's be real.

3. When Celebrities Weren't Afraid To Mess With Him

Something like this could really only go down with Kimmel.

4. All Of His Mean Tweets Segments

These will never not be entertaining.

5. When He & John Krasinski Had A Prank War

6. When He Made Parents Prank Their Kids

Even when it's not Halloween-time, this never gets old. Poor kids!

7. When He Decided To Test Emoji Meanings

His man-on-the-street segments are genius.

Now, obviously, Kimmel will most likely return to Jimmy Kimmel Live! at some point. But, for now, fans need to just roll with the punches and get their Kimmel fix in the a.m. and on YouTube.

More like this
'RHOBH' Star Diana Jenkins’ Fiancé Asher Monroe Once Shared A Stage With Kelly Clarkson
By Brad Witter
Lisa Kudrow Explained How Her Body Image Changed While Filming 'Friends'
By Grace Wehniainen
What’s New On Netflix: 'Never Have I Ever' & 'Indian Matchmaking' Return
By Arya Roshanian
Everything To Know About The HBO Max & Discovery+ Streaming Service Merger
By Brad Witter
Get Even More From Bustle — Sign Up For The Newsletter