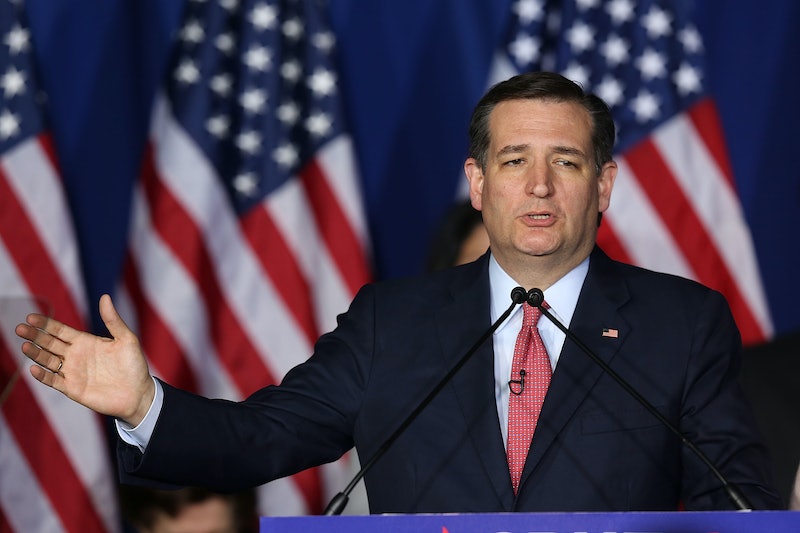 Time to say goodbye to a familiar face, although you probably won't find many progressives who're all that upset — Ted Cruz dropped out of the presidential race on Tuesday night, following a sound defeat in the Indiana primary at the hands of frontrunner Donald Trump. And you better believe that plenty of people took notice, and decided to have a little fun at the defeated Texas senator's expense — Ted Cruz drop out memes and jokes may be a little cruel right now, but if anyone deserves to be chuckled at, it's him.

All throughout the primary race, really, Cruz has been involved in some of the more biting, bizarre, and disconcerting moments — for instance, when he ate that weird thing that popped out of his mouth during one of the Republican debates, or when he caustically imitated his daughter yelling "not gonna happen," or when he couldn't seem to agree on a few seconds of hand-holding with Carly Fiorina, his pseudo-running mate.

Basically, the guy has a flat-out awkward way about him, and it's not helped by how gratingly insincere his rhetoric often comes across and how deeply unpopular he is, even with his own Republican colleagues. He's sort of the perfect conceivable target for political jokes and jabs, especially on a night like this, as his candidacy has come to an end. Here's some of the best of what's floating around on Twitter.

Love him or hate him, Cruz was the biggest, toughest barrier to Trump being the nominee — and as of Tuesday night, he's gone. Make of that what you will.

More like this
Jennifer Coolidge Needs 'Legally Blonde 3' To Happen So She Stops Getting Hot Dog Jokes
By Jake Viswanath
Christina Aguilera Took A Powerful Stand At Brighton Pride
By Sam Ramsden
Are John Legend & Kanye West Still Friends? The Singer’s Latest Update Is Candid
By Brad Witter
'Scream’s Courteney Cox Has Broken A Major Horror Record
By Sophie McEvoy
Get Even More From Bustle — Sign Up For The Newsletter