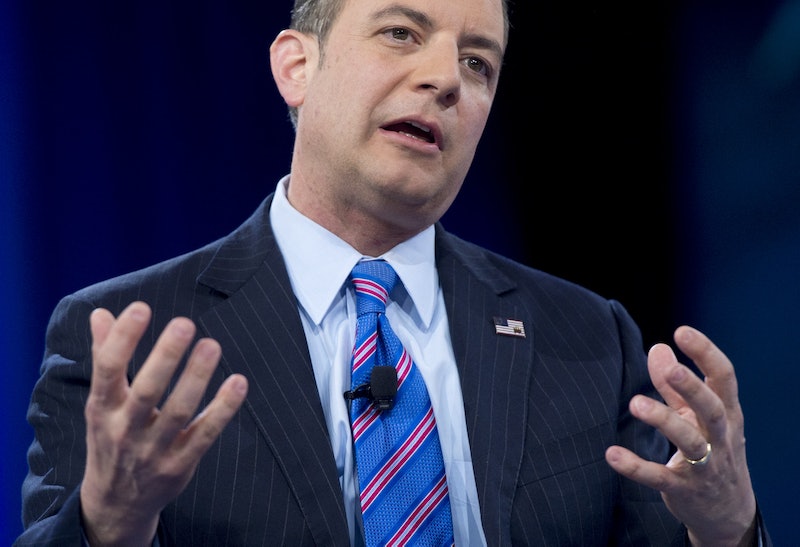 On Tuesday night just after Ted Cruz dropped out of the race for the Republican nomination, Republican National Committee Chairman Reince Priebus tweeted out that Donald Trump was the presumptive nominee. The RNC chair appeared to be shutting down any further talks of a contested convention, emphasizing that priority for the party needed to be on preparing for the general election and beating Hillary Clinton. Priebus added in his tweet that "we all need to unite and focus on defeating" the former Secretary of State and Democratic frontrunner. He added #NeverClinton to hit his point home.

By no means did the RNC chairman's tweet sound remotely celebratory. If anything, there was a tone (or at least what tone can be captured in 140 characters) of being resigned to a less than pleasant situation. However, seeing such a decisive statement form the head of the Republican National Committee seemed to make it clear to all party hopefuls who were pushing the anti-Trump movement that now was the time to close up shop and set their sights on the Democrats. Although Ohio Gov. John Kasich has not dropped out of the race for the GOP nomination, he still has fewer delegates than Marco Rubio — and he quit the race nearly two months ago after his loss in Florida.

Even before his tweet referring to Trump as the "presumptive nominee," Priebus was clearly readying the party to set its aim on Clinton. Earlier in the day, he tweeted a Wall Street Journal article titled "Hillary Clinton's Growing Problem With Independents." However, up until his Tuesday night tweet, it seemed like there would at least be the possibility that Trump would not be the Republican nominee and that there would potentially be a brokered convention drag-out fight to put another candidate on the general election ticket.

That said, Priebus' pretty decisive statement seems to have quashed such prospects.