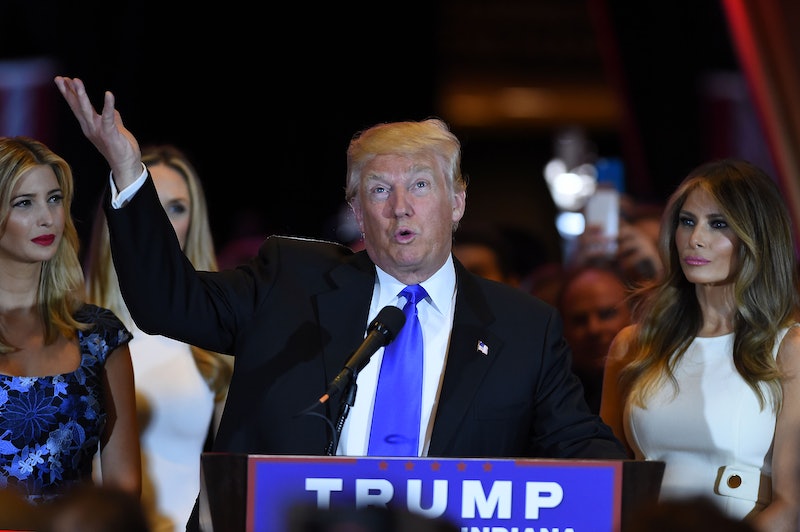 Tuesday's Indiana primary was certainly a nail-biter, with GOP frontrunner Donald Trump taking the win about ten minutes after polls closed, leading his opponent Texas Sen. Ted Cruz to drop out. It's certainly been a night full of "bigly" surprises, as Trump might say. Yup, Trump said "bigly" during his victory speech and the Internet is reacting with hilarious jokes, as you might expect.

After winning Indiana, Trump gave a speech from his campaign headquarters in New York City. Specifically, in reference to the U.S. he said, "We've been losing all the time. We lose with our military, we can't beat ISIS. We lose with trade, we lose with borders. We lose with everything." Of course, he had to make sure we were all reminded of his many policy platforms. He continued — there is a light at the end of the tunnel — by stating, "We're not going to lose. We're going to start winning again, and we're going to win bigly."

That's right, folks. The potential Republican Presidential nominee just used the word "bigly" in his victory speech. It's apparently not the first time the businessman has used the word, but it never gets old regardless.

Here's what the Internet had to say about America winning bigly.

So, there you have it: We have a presumptive Republican nominee for president. Not only does he take The National Enquirer for fact, he also uses the word "bigly," and not in an ironic way. Good job, America.