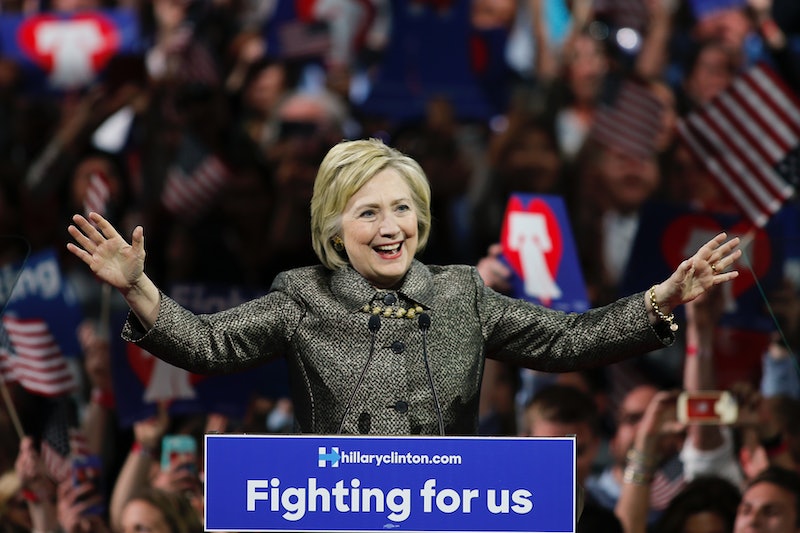 On Tuesday night, with another primary victory for billionaire businessman Donald Trump rendering the Republican nominating race all but over, the Democratic Party's frontrunner weighed in on the billionaire businessman's rise — Hillary Clinton responded to presumptive nominee Donald Trump with a tweet asking people to donate to her campaign, no doubt eyeing a long, costly general election fight in the months to come.

If you're bothered by the notion of President Donald Trump, then you understand why Tuesday night will probably bring some donations rolling into the coffers of the Democratic candidates, whether it's Clinton (who is a virtual lock for the nomination despite losing Indiana on Tuesday) or Vermont senator Bernie Sanders, who continues to rake in the cash.

Basically, now that Texas senator Ted Cruz has pulled out of the race and Trump has secured yet another staggering victory (he's now passed 1,000 total pledged delegates in total), he's become a virtual lock to win the GOP nomination. Which means you can expect to see Clinton start to start fundraising almost entirely off of her general election matchup against him, rather than getting involved in any more scrapes with Sanders.

As it stands now, Clinton hasn't been the most impressive fundraiser in the Democratic race — that's been Sanders, buoyed by his record-setting levels of small-dollar, individual donations. Clinton has a considerable war chest of her own, however, and she's clearly hoping that the animating presence of a controversial, hugely inflammatory demagogue like Trump will help boost her donations even further.

And if his dismal approval ratings among women are any indication — as well as his apparent inability to avoid saying sexist things — she may well be on to something.