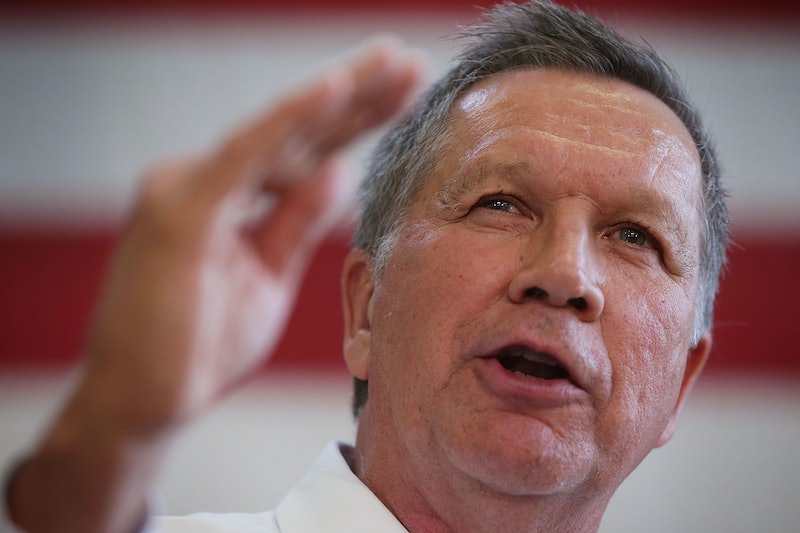 Say your goodbyes to Ted Cruz, everyone. On Tuesday, following a double-digit defeat in the Indiana primary, the Texas senator and chief rival to Republican frontrunner Donald Trump finally dropped out of the 2016 race, opening up a clear path for the billionaire businessman to claim 1,237 pledged delegates, and thus the party's presidential nomination. But you might be wondering: Wasn't there someone else in the race, too? Someone whom voters could theoretically still turn to, rather than the wildly inflammatory Trump? In other words, is John Kasich still in the race?

Update: Kasich dropped out of the presidential race.

Earlier: You remember Kasich, right? The gray-haired man during the debates who focused almost entirely on building a own good-natured, country-first, ho-hum image? In spite of a pretty strong conservative record as Ohio's governor? Might that guy still be an option?

Well yes, in fact! John Kasich is still hanging in there, despite having been mathematically eliminated from the possibility of winning race weeks ago. He's currently in fourth place, with a paltry 153 delegates, trailing even Marco Rubio, who dropped out months ago. But he's still here, having waited out everyone else except the presumptive nominee, and his campaign reaffirmed on Tuesday that he plans to stay in until Trump has actually crossed 1,237 delegates.

Kasich entered the race all the way back on July 21, 2015, which means if he indeed stays in all the way to the convention, he'll have spent one full year of his life campaigning to be commander in chief (July 21st, 2016 will be the final day of the Republican National Convention). Unfortunately for him, however, his chances have never seemed worse ― Trump is now on an ascending course straight toward a delegate majority, which would mean he'd win the GOP nomination on the convention's first ballot.

That would mean he'd avoid a contested convention, in which case pledged delegates would be free to support whoever they pleased. And that scenario ― which would require that Trump fall short of the 1,237 mark, forcing a second ballot in which he could make an appeal (likely rooted in his superior electability) to the suddenly unbound delegates ― is Kasich's only chance to seize some relevance following his nearly yearlong candidacy.

That was the same thing Cruz was holding out hope for, too, but he and Kasich are clearly of different minds about their preferred endgames. After Trump's Indiana win made him eventually reaching 1,237 so obvious, Cruz thought better of things and dropped his bid, but Kasich is persevering through. Which is basically a long way of saying: Yes, for the time being (and for some time yet), you've got precisely one anti-Trump GOP alternative left to choose from.