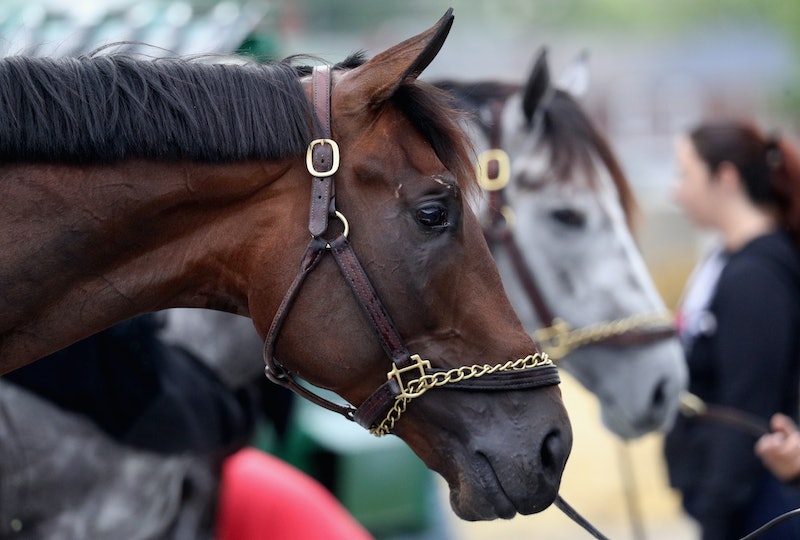 The two horses that are top picks for the Kentucky Derby this Saturday are Nyquist and Mohaymen. These are the two Thoroughbreds with the best odds at winning. Nyquist is the current favorite at 3-1 in Las Vegas, where the betting is well underway. Mohaymen is the horse to beat with odds of 4-1. There's another number, that the two have in common. It's their age. So how old are the horses at the Kentucky Derby?

Both Nyquist and Mohaymen are 3 years old. That's the age of all the horses at the Kentucky Derby, despite the fact that older Thoroughbreds can often run faster. And it's no coincidence. The rules of the Kentucky Derby — as well as the other races that make up the Triple Crown, the Preakness Stakes and the Belmont Stakes — limit participation to horses that are 3 years of age.

That comes from the the beginning of English organized horse races like the St. Leger Stakes, the Epsom Derby, and the Two Thousand Guineas Stakes. Those three races make up the original United Kingdom Triple Crown, and they all began around the turn of the 19th century. When the game arrived to America, the organizers copied the rules — and the name, "derby" came from Epsom Derby — of the predecessors across the pond.

No one knows exactly why the age limit was set in the first place. Brendan Koerner wrote for Slate that it probably has to do with the age that the horses reach maturity, 4 years of age:

A race with 2-year-olds would be the equine equivalent of watching a junior-varsity basketball game; a race consisting of 4-year-olds would be something of a snooze, because by that time it would be clear which horses were great and which were lackluster. On the other hand, 3-year olds guarantee both viewing and wagering excitement—they're old enough to burn up the track, but raw enough to add the element of uncertainty that makes gambling worthwhile.

So at 3 years of age, they're not too unpredictable any longer. Nor are they too predictable yet. Given betting's long connection to horse racing, this explanation makes a lot of sense.

If you want to see a 4-year-olds, you have a chance at the Breeders’ Cup Classic, where 3-year-olds go up against their older competitors. The older horses get saddled with a bit more weight to make things fair. The suggested age for attending the Kentucky Derby, though, is probably 21. I hear the mint juleps are fantastic.