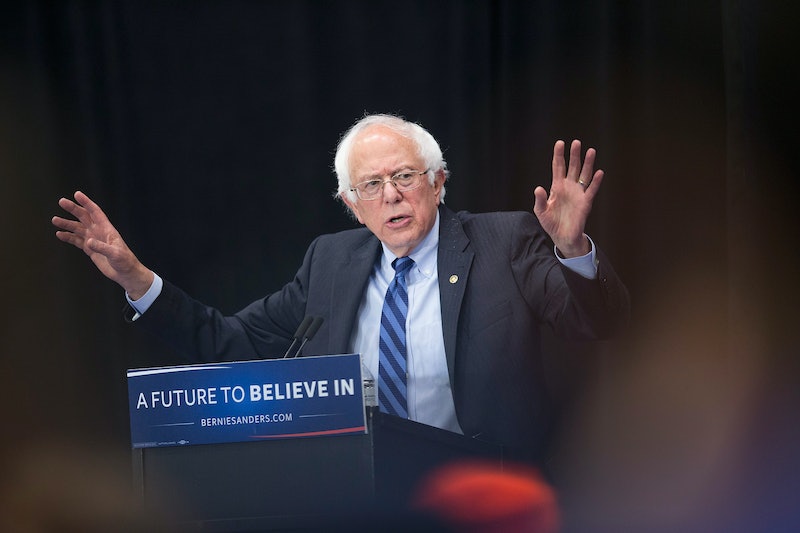 So you’re at a party, and someone says something ignorant. And while you know that they’re in the wrong, and that you could totally engage them and win if you were a bit more prepared, your words escape you. To make sure that doesn’t happen, we’ve compiled a series of handy reference guides with the most common arguments — and your counter-arguments — for all of the hot-button issues of the day. This week’s topic: how to argue against Bernie or Bust, aka Bernie Sanders' diehard fans' refrain.

Common Argument #1: We need a political revolution, and only Bernie is serious about bringing it about.

Your Response: While the throngs of impassioned supporters inspired by Sanders will be understandably disappointed if he's not the nominee, this "Bernie or Bust" business ― progressive voters who're threatening to withhold support if he's not the nominee ― is coming at a profoundly dangerous moment in American politics.

Not everyone's going to agree about the need for a "political revolution," as longtime Democratic supporters of the Obama administration's policies might not be as keen as some of the the progressive independents who've helped fuel Sanders' candidacy. There are definitely powerful moral arguments for the economic justice policies he supports. There's no doubt that his vision for America is further to the left than Clinton's, even with the work he's done to drag her that direction. That's basically undeniable.

But if there's no "political revolution" on the table ― if Sanders loses, like he's virtually statistically guaranteed to do ― does it really make sense to let everything blow up in the opposite direction? If Sanders' vision of a fairer, more equitable United States excites you, there's little practical argument for sitting this one out in the fall, or for obfuscating the seismic threat that Trump poses to the American political system.

To be clear, there's nothing about Bernie or Bust that inherently means "vote for Trump instead," but he's already made it obvious that he's going to be appealing to disaffected Sanders voters. If he lures enough of them to his side, well, it'll be a sad moment in progressive politics. Simply put, it's absolutely essential that Sanders supporters don't let their frustrations outweigh the facts as they are now, if we're going to avoid the President Trump nightmare scenario.

Common Argument #2: Clinton shouldn't even be the nominee. She's only winning thanks to a rigged system.

Your Response: Whether or not you agree with the process the Democrats have in place to decide their nominee (I think "rigged" goes a bit too far), Clinton is winning fairly within that process, and Sanders is, to this point, losing fairly. There have been some valid complaints in some states ― the voter registration rules in New York, for example, drew a lot of criticism for forcing primary voters to register as Democrats a full six months before election day. Even in a closed primary, that kind of advance deadline is pretty egregious, and it's a well-established progressive ideal that voting ought to be easier, not more difficult. Add to that the reported removal of more than 100,000 voters from the rolls in Brooklyn (blamed on a "clerk's error" by the New York City Board of Elections, according to the New York Daily News), and it's plain as day why some people are outraged.

But even if Sanders had won the New York primary, even by 10 points (which would go far beyond what any of the polls suggested), his chances of winning the nomination wouldn't be much better. He'd still be trailing, and by a virtually insurmountable deficit. Truthfully, his fate has been sealed for weeks, doomed by his run of abysmal performances across the South ― made possible in large part by Clinton's strong support among black voters.

Since the Democrats award their delegates proportionally to the vote, all of those blowouts on Clinton's part stitched things up for her nicely, and all the Sanders five-point wins in the world won't change that. And, more to the point, the primaries aren't even necessarily democratic, governmental elections; they're functions held by the parties to pick their nominees. There's actually no requirement that the party to listen to the will of the voters about who should be nominated, although in this case, the rightful victor and the establishment's pick are one in the same: Clinton leads by more than 300 pledged delegates, leads the popular vote by millions, and has won a majority of the states.

Common Argument #3: You didn't even mention the superdelegates! They're stealing the nomination from Bernie.

Your Response: Nope! This is maybe the most durable, flatly incorrect view of the Democratic primaries thus far. The Democratic superdelegates get a lot of criticism, and it's no secret why ― they're an inherently anti-democratic (that's small-d democratic) mechanism, and they really violate many people's sense of fairness. But in reality, every single election since they were instituted in 1982, they've always ended up supporting the candidate with more pledged delegates ― in other words, they've never actually done anything but affirm the rightful winner.

That's why Sanders' occasional statements about trying to flip superdelegates to his side at the convention are so deeply, wildly radical ― trailing in the pledged delegate race by hundreds, and trailing the popular vote by millions, there's no democratic "will of the people" argument in his favor. If anybody's saying they're willing to steal the Democratic nomination, it's not Clinton. It's Sanders and his campaign team, full stop.

Common Argument #4: Well, Clinton is fool's gold. A Trump presidency could force a liberal resurgence! It might even result in more progressive change than a Clinton presidency would!

Your Response: That's an awfully big gamble to take, especially when there's no meaningfully predictive evidence to support it whatsoever. And especially when the candidate you're willing to risk is a demagogic political novice, loudly shouting a slew of terrible, utterly inhumane policy ideas, who also seems genuinely unable to control himself.

It's also an attitude, it must be said, that may reflect a certain amount of privilege. Suffice it to say, a Muslim-American who's seen their friends, family, and faith demonized by Trump, or an immigrant from Mexico who's been similarly smeared and scapegoated, or a military veteran who understands the danger of his rhetoric on torture and war crimes, or a woman who values her reproductive freedom, or any intersection thereof, might have a different outlook.

And frankly, that's the progressive ideal you should hold close to your chest in this election ― if you're privileged enough to even for an instant think, "hey, maybe Trump wouldn't be so bad," then you ought to stand up for those people who aren't. Otherwise, you should consider whether you're really making choices on policy grounds, or whether you're operating mainly out of dislike for Clinton.

Common Argument #5: But aren't you ignoring her foreign policy record? Her hawkishness is dangerous, too!

Your Response: That's a very valid concern about Clinton from a progressive perspective. But remember, you're not weighing Clinton against Sanders anymore, you're weighing her against Donald Trump ― a man who spins false historical yarns about executing Muslims with bullets dipped in pig's blood, who wants to more fully embrace torture (and says generals who disagree with him are "weak"), and who casually muses on national television about using nuclear weapons in Europe and the Middle East.

If you've got concerns about Hillary Clinton's foreign policy plans, however deeply held and valid they may be, you should have bigger and far more existential concerns about Donald Trump, both for what he'd mean for America, and what havoc his instincts might wreak on countries across the world.

Common Argument #6: Well, Bernie was the stronger general election candidate, and Democratic voters chose Clinton. They will get what they deserve.

Your Response: Sanders may be polling as the stronger general election candidate, sure, but that's before he's stood up to the kind of national scrutiny and right-wing attacks that Clinton's been absorbing for more than 20 years, initially as First Lady (when some were painting her as a literal murderer) then as a senator from New York and a secretary of state. And, my fondness for Sanders' politics aside, it's easy to imagine the GOP (especially with a nominee as virulent and mean-spirited as Trump) smearing and effectively demagoguing his Democratic socialism.

Could he have won? Sure, and I'd have voted for him, as any progressive should have. Here's what I wouldn't have done: organize an effort to convince supporters to sit out the general election, in the midst of one of the most stark and significant races in American history. You might remember that there was a similar movement in 2008 by some Clinton supporters, to freeze out then-Sen. Barack Obama during the general election.

Mercifully, that didn't come to fruition. Whatever the John McCain and Mitt Romney presidencies might have looked like, you'd have been hard-pressed to argue that liberalism would actually be stronger if they'd won, even if you're using some shaky, speculative "but it'll make the people rise up" thinking. If you're actually an issues-oriented progressive (perhaps with a healthy fear of totalitarian-style appeals to violence), then this is at best wishful thinking, and at worst a woeful self-deception.

Clinton is better than Trump. And if you really think about the real, lived consequences a Trump presidency would have for millions of people, you might realize how dangerous apathy can be. Hopefully, by the time the general election rolls around, we'll all be on the same page about this. But, truth be told, the fact that this is even a question is terrifying enough on its own.