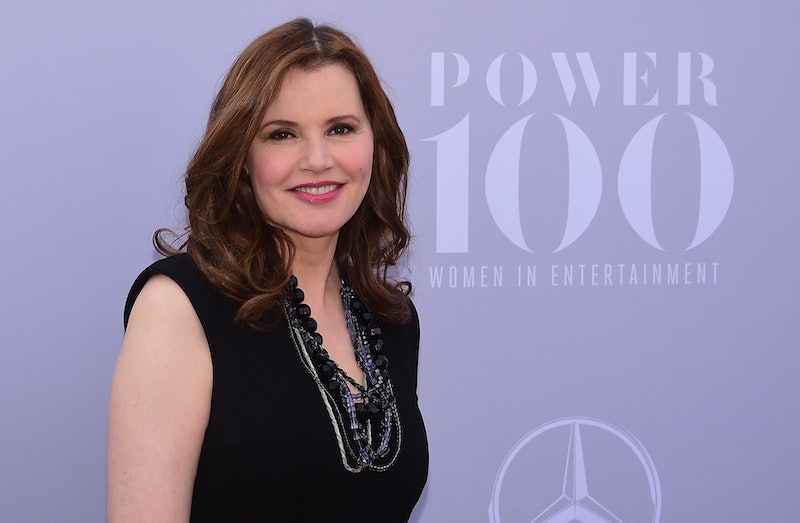 In an industry where Maggie Gyllenhaal can be rejected for the role of a 55-year-old male's love interest because she's too old, Hollywood has a lot of work to do when it comes to the representation of so-called older women in film. This is something Thelma & Louise star Geena Davis hopes to help to rectify with her project, the Geena Davis Institute on Gender in Media, "the only research-based organization working within the media and entertainment industry to engage, educate, and influence the need to dramatically improve gender balance, reduce stereotyping and create diverse female characters in entertainment targeting children 11 and under." Vulture recently sat down with the actress to discuss Geena Davis's opinion on women in film, and it was illuminating.

One of the reasons that seem to have prompted Davis to start her foundation was personal experience with Hollywood's sexist treatment of older women. She explained in the Vulture interview that she was initially resistant to this idea: "I’d heard about this problem that, when you turn 40, the roles dry up... I was very optimistic. I was always trying to choose a role that was challenging and interesting and avoid parts like The Girlfriend of the Person Having the Adventures." However, later in the interview she concedes: "Film roles really did star to dry up when I got into my 40s. If you look at IMDB, up until that age, I made roughly one film a year. In my entire 40s, I made one movie, Stuart Little." It's a touching story, but I still have to ask: how much is Davis's institute actually changing things for older women in Hollywood?

First, we must discuss the Institute's successes. Women in general seem set to benefit from Davis's work. Although Davis's institute seems to have a strong academic focus, with the organization conducting a wealth of studies on gender and diversity, Davis's own approach to promoting more women on screen seems more pragmatic. In an interview with Robin Roberts on Good Morning America, Davis had some practical tips for those working in film and TV to create "change without offending anybody or anything" and ensure more female representation in their broadcasts: “Just by saying, ‘Hey, you know that scene tomorrow where I give a speech? Let’s have the crowd be half women,’ or, ‘You know when I get my gang together, could that be half women?’ or ‘Could my cabinet be half women? Could the board be half women?’ Of course everybody is going to go, ‘Yeah, of course, why not?’”

But Davis is eager to appeal to academics as well as pragmatics. According to the Guardian, she sponsored the "largest ever study on gender depictions in family-rated films and children’s television... The research spanned a 20-year period." The findings were disturbing, uncovering a 1:3 ratio of female to male speaking characters, and that female characters made up just 17 percent of crowd scenes.

However, Geena Davis seems like a people person at heart, and she argues that if you haven't heard of the institute's work up until now, that's intentional. You weren't the people she was trying to reach; she's been talking to industry folks, instead.

My goal always has been to educate the business instead of the public, which is why people didn’t hear about it for a long time. It was much more important to reach them in a collegial way, "I’m in the biz, I’m your friend," rather than encouraging the populace to rise up and demand better.

According to the website for the Geena Davis Institute On Gender In Media, this approach has yielded some impressively concrete results — again, for women in general, rather than older women specifically. Forget some studio PR rep paying lip service to the idea of diversity without the studio actually doing anything about it. Just two of the institute's accomplishments include ensuring "68 percent of entertainment industry executives familiar with the Institute’s research changed 2 or more projects. Changes included aspirations/occupations of female characters, their dialogue, story development or an increase in female characters" and "influenced change in major feature films including Pixar’s Monster’s University, Sony’s Hotel Transylvania, and upcoming film The Little Prince."

So in short: more roles for women in Hollywood and meatier roles, not just the "girlfriend" role Davis mentioned avoiding in her interview.

Which is great news for women in general. But the question remains: has Davis's institute changed things for older women on screen? While this may be one of the reasons Davis founded the institute, her focus seems too broad (her most recent project, the Bentonville Film Festival, promotes both racial and gender diversity) to have much effect on such a specific demographic. Davis's work seems to be more useful to women at large in film than older women — which is both wonderful and a shame. Wonderful in that what benefits all women should, in theory, benefit all women eventually, and a shame in that older actresses, as Davis herself said, are the ones most in need of the help to have as active and vibrant a career after 40 as a Meryl Streep or a Julie Andrews.

While Davis tackles general discrimination against women, it might be time for someone else to start an additional institute that specifically concentrates on tackling sexism against older actresses. Because it's easy to complain about it, but it's not so simple to remedy it.