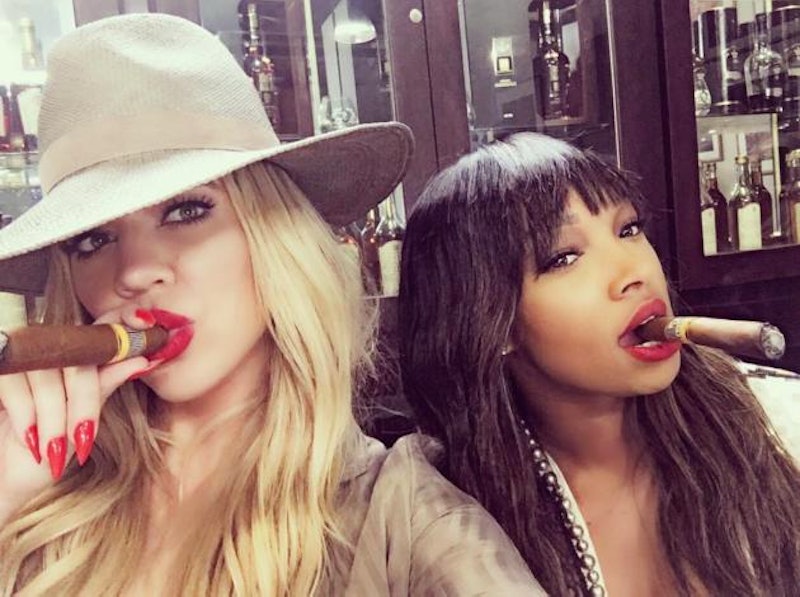 This week, the first commercial flight from the U.S. touched down in Cuba. There are 10 U.S. airlines that have now been approved for commercial flights to Cuba, and Carnival cruise ships began sailing to Cuba in May. Media outlets have been dedicating tons of coverage to the country, but what concerns me about many of these articles is the way they are promoting tourism to Cuba, with stories that explain how Americans are testing the limits by traveling to "the forbidden land" or headlines that read, “These People Are Cooler Than You Because They Have Already Been To Cuba.” A few months ago, the Kardashians flew down to Cuba, and their trip illustrated how tourism can quickly objectify a country.

Certainly, this is a historic moment, and one worth celebrating — but as people begin to pack their bags and wait for tourism to open completely in Cuba, it is important to remember that the country is not just a new resort getaway for people to indulge in crazy nights and boozy beach days.

People like me who have already been to Cuba often exclaim that they're happy to have visited before American tourism "ruins it." I’ve seen comments on Facebook from friends and colleagues who say they want to visit the country before giant hotels and other businesses take down the gorgeous buildings and all the old cars disappear. What these people forget is that Cuba has been open to tourists from all other countries except the United States since the 1960s — Americans don't single-handedly determine the future of Cuba. It is exactly this mentality that helped spur Cuba's revolution; the country had been turned into a tourist playground that abused and neglected its own citizens. Way to go, America — you're already getting ready for round two.

Cuba is not just a tourist destination with historical structures stuck in time for people to take photos of and put on Instagram. And before people start booking their cruise tickets it is important to remember that the Cuban people might not be benefitting as much as you think from your spending — larger overseas companies will be buying land for hotels, with business being catered to the tourist sector and not towards business that will sustain life for the Cuban people.

For many Cubans, one of the main incentives for joining the entrepreneurial sector is the promise of higher incomes, compared to their low-wage state jobs. These low-wage government jobs are not menial — these people are professors, doctor, and lawyers. And while there are people thriving in their own private businesses, it is still extremely difficult. Many products are difficult to find in Cuba, and finding the ingredients to run a private restaurant out of your home (called paladars) can mean turning to the black market.

Americans don't single-handedly determine the future of Cuba. It is exactly this mentality that helped spur Cuba's revolution; the country had been turned into a tourist playground that abused and neglected its own citizens. Way to go, America — you're already getting ready for round two.

One night, when I was studying abroad in Cuba in 2015, the owner of the bed and breakfast where our class was staying sat down with us for dinner. We talked for hours at a giant square table, asking about her business, joking about fellow classmates losing horribly at dominoes, and even approaching some touchy subjects of race and money. At the end of the conversation, she said in broken English how happy she was to have us staying in her home, and that we were her favorite people to host yet. She told us how she would do anything to make our stay as wonderful as possible, mentioning that she had even turned down her daughter's request for eggs that morning because she was running low on food that week.

“I told her that I needed them for you all for breakfast,” she said smiling. My stomach dropped at that moment, wishing I could give back the second portion of eggs I ate that morning. (The food scarcity in Cuba is in part due to the country importing about 60 percent of its domestic food requirement, ironically lacking the resources to produce fruits and vegetables on its own fertile land. Most of the products being imported are too expensive for the $20-a-month salaries many Cubans earn.)

Equally ironic is the fact that many Cubans don't even have access to certain Cuban tourist areas. When my class drove to the beach town of Matanzas, we were welcomed by a toll booth. My professor explained that the booths were there to check passports and see whether people were Cubans — Cuban people were not allowed in the resort beaches unless they paid for access, a fee that would amount to a significant percent of their monthly salary. The tourist bus we rode in on then turned into a giant gated town filled with restaurants, shops, and hotel buildings. The only Cuban people in the resort area were the workers serving people food, lifeguarding, and covertly selling cigars on the side to make a few extra bucks.

Now, this is not to say that all Cubans are suffering and should be pitied. They have an amazing schooling system where education is free all the way to your doctorate, and they have one of the best health care systems in the world. Their jails have also shown to treat inmates more humanely than U.S. prisons.

But while some speak of the hope and opportunity that has come from the opening up the private tourist sector, it's important to remember the limitations to people’s freedom and inequalities that still exist. It is a country of contradictions: One of the friends I made in Cuba told me that she doesn't want to see Cuba turn into a capitalist country like the United States. She also recently took on a second job as a tourist translator to make more money.

So yes, tourism is helping the Cuban economy, but it is important not to exploit the Cuban people and call it help. For those planning to go down, don’t just go to a resort and sit on a beach chair drinking mojitos all day. Don’t stay in the new hotels owned by people in other countries, which will only use the Cubans as service workers. Instead, find a local who owns a bed and breakfast and is trying to make a living for themselves. Understand how your actions as a tourist affect other people's lives, but also realize that the idea of the Cuban culture being "ruined" by American tourists is a fundamentally self-centered ideology.

More like this
Windrush Victims Are Still Waiting For Compensation
By Sam Ramsden
13 Summer Solstice Quotes To Celebrate The Longest Day Of The Year
By Sadie Trombetta
How To Fight For Reproductive Rights, Based On How Much Time You Have
By Courtney Young
Juneteenth Is Now A Federal Holiday — Here's What That Means
By Lani Seelinger and Syeda Khaula Saad
Get Even More From Bustle — Sign Up For The Newsletter