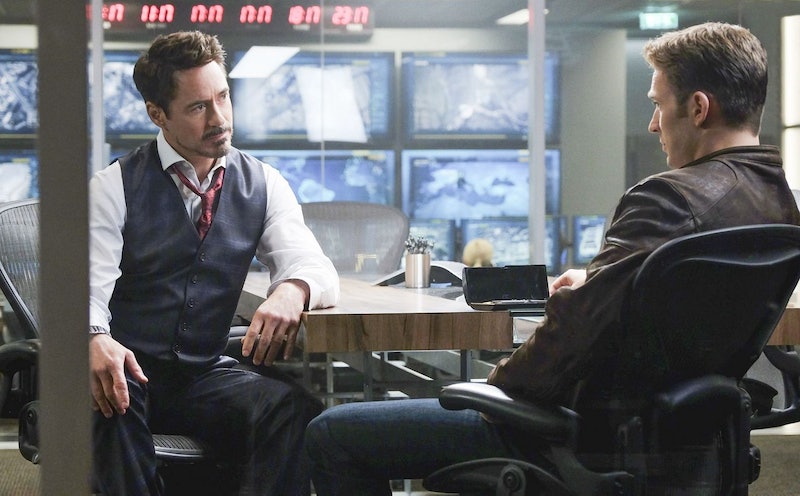 Of all the emotions fans expect to feel while watching Captain America: Civil War, heartbreak is probably not one of them. Excitement, nervousness, anticipation of the climatic battle you know is coming — that's all stuff you can predict. But sad, disappointed pain over the break-up of a once-beloved couple? It's just not in the cards. Yet in Civil War, fans of Tony Stark and Pepper Potts are going to feel pretty bad when they learn that the duo have split, and they'll likely spent the rest of the movie (well, until the awesome appearance of Spider-Man distracts them) wondering why Tony and Pepper broke up.

The answer is revealed fairly early on in Civil War. When Tony's fellow Avengers question why Pepper is not around, and Tony reveals that the two are taking some time apart. He says that his refusal to stop with being Iron Man is the reason, and it's clear from his expression and tone that he's heartbroken over the split. No more explanation is given, and Pepper is absent from the rest of the movie.

It's sad to think that Tony's love of being Iron Man caused Pepper to break up with him, but it makes a lot of sense. At the end of Iron Man 3, Tony — after realizing how dangerous being a superhero can be, both in terms of harming himself and those he loves — pretty much quits being Iron Man. Yet in Avengers: Age of Ultron, he's back in the game, despite the concern he and Pepper both had for his actions. Pepper isn't in that movie, but it's clear she and Tony are still together; at the end of the film, Tony reveals that he imagines a future with Pepper, and implies that he might no longer want to be Iron Man, a choice his girlfriend would undoubtedly support. So when he's seen back as Iron Man in Civil War, it becomes clear that Tony's decision to keep wearing the suit has taken a large toll on his relationship with Pepper.

Perhaps when the next Avengers movie or Iron Man 4 (potentially) comes along, more information will be given, and maybe Pepper herself will even make a return to clear up any lingering questions. Until then, fans will have to make do not knowing the full story between Tony and Pepper's break-up, and hope for a reconciliation someday soon.