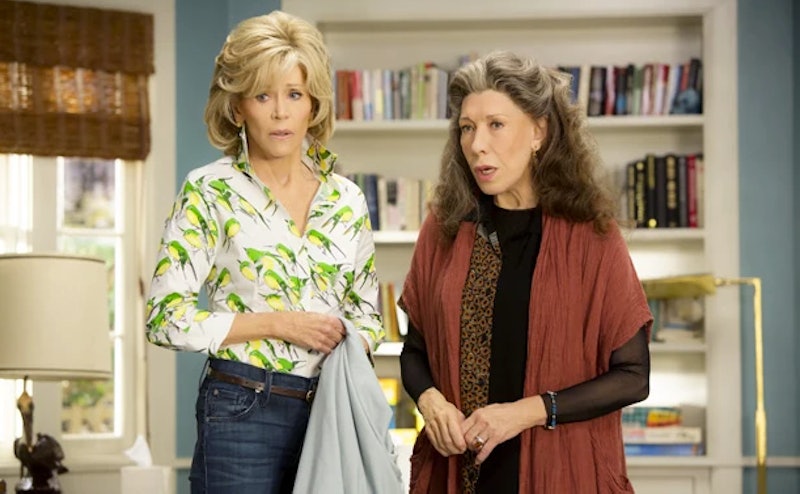 Just like the show’s titular characters, let’s hope that Grace & Frankie only gets better with age. Season 2 of the Netflix series hits screens on Friday, May 6, and in the grand tradition of Netflix original series it will hit all at once. So, fans might be wracking their brains or trying to quickly marathon Season 1 again to find out where the characters left off. But, if you don’t have time to re-watch the first 13 episodes, have no fear. I have you covered with a Grace & Frankie Season 1 recap.

To jog your memory, Grace & Frankie follows the lives of Grace (Jane Fonda) and Frankie (Lily Tomlin) after their husbands (played by Martin Sheen and Sam Waterston, respectively) come out as gay and seek divorces in order to marry each other. The comedy explores the fallout between the couples, how it affects their adult children, and, primarily, how Grace and Frankie are moving forward and rediscovering themselves with their new, unlikely friendship. The show is hilarious and feminist and proves that women are capable of being funny, falling in love, and doing interesting things at any age. (Imagine that!) While the intriguing premise lets us know where the show started, fans may need some help remembering where the series ended up. So, here is your Grace & Frankie season 1 recap, explaining where all of your favorite characters left off.

When Sol and Robert broke the news, Grace had a lot to wrap her head around. While she and Robert never had a grand romance, she never considered that he was gay. And, being gay was something that Grace had to adjust to. She was openly not a fan of Sol’s hippy dippy wife, but, of course, the show revolves around their unlikely friendship. After years of putting up with each other, Grace and Frankie’s new bond and shared understanding make things better. Throughout the season, Grace looks for her next step. She tries to go backward and return to her career at the helm of her beauty empire, but times have changed and her daughter Brianna is in charge. So, Grace moves forward and finally begins to have some fun with Frankie, like a wild “say yes night,” kissing one of Frankie’s convict art students, making organic lube with Frankie (which is for “everyone”), and even getting a boyfriend, Guy the Explorer who ate his friend on a grizzly expedition. While Guy was a great guy, in the finale episode, Grace ended things.

While Robert and Grace were long out of love, Sol and Frankie were best friends. Frankie is also an empathetic hippy, so while Grace could embark on adventure and new romances, Frankie was still mending a broken heart with calories, cigarettes, hallucinogens, and iPhone self-therapy lessons (which Grace also ended up trying). Frankie turned to the Internet for friendship but learned it was an empty companion. And, she did almost have a romance with Jacob, but her friendship with Sol kept getting in the way. She stayed so connected to Sol throughout the season that in the finale episode, the exes ended up falling back into old habits …

Bud is Sol and Frankie’s adoptive son. I am not sure if he is older than his also adopted brother Coyote, though his level headedness and success make him appear to be the big brother. He is a lawyer who helps with the divorces and a friend of Brianna’s (Grace and Robert’s daughter). Basically, Bud is no drama. Except he may have seen Robert and Sol kiss a few years before the series started/they came out.

Like Bud is Frankie’s dutiful son, Mallory is the together daughter. She has a family of her own and is married to a handsome doctor. The only intrigue surrounding her character is that she and Coyote were a couple when they were young. In the Labor Day flashback episode, “The Elevator,” it is alluded that they had a pregnancy scare years ago. We also know that Coyote still has feelings for Mallory based on the fact that he went all "Stanley Kowalski,” as Brianna put it, on Mallory’s front lawn...

When we meet Coyote he is fresh out of rehab (again) and trying to better himself. He gets around on a bike, sleeps on his brother’s couch, and has down-graded from professor to substitute teacher. But, Coyote is optimistic. We also know that during his last bender he turned up at Mallory’s house, and it is later revealed that he drove into Mallory’s yard, taking out a mailbox, and yelled/begged her not to marry Mitch. Though, she had been married to Mitch for seven years and has kids with him. Yikes. While, Mallory and Coyote have a past, let’s hope that Coyote has a better future next season.

Brianna is a ballsy career woman who heads her mom’s cosmetic company. She is, however, lonely. This leads Brianna to get an adorable dog, named Spit. Seriously, this dog is super cute. And, on her quest to test her new product, Frankie’s homemade lubricant, she ends up sleeping with Barry from accounting — with whom she then goes on a date, only to be interrupted by Bud and Coyote. I really hope that Barry sticks around for Season 2.

Robert is done feeling guilty, and he is embracing the new chapter in his life with a Ryan Gosling chair and a big wedding. He even stands up to an old, uptight colleague in the bachelor party episode. Robert is ready to be a husband to Sol. The vows are written and the invitations have been sent.

So, Sol and Frankie’s trouble keeping boundaries led them to bed together in the finale episode. Sol shows up at the beach house looking for Frankie, only to be met by Grace who urges him to step up and not begin his impending marriage to Robert the way he ended his last with Frankie. In the episode’s cliffhanger, Sol is about to enter his home with Robert. But, will he go in and tell Robert what has happened. Will the wedding go forward? I guess we’ll just have to marathon the entire second season on Friday, May 6, and find out.