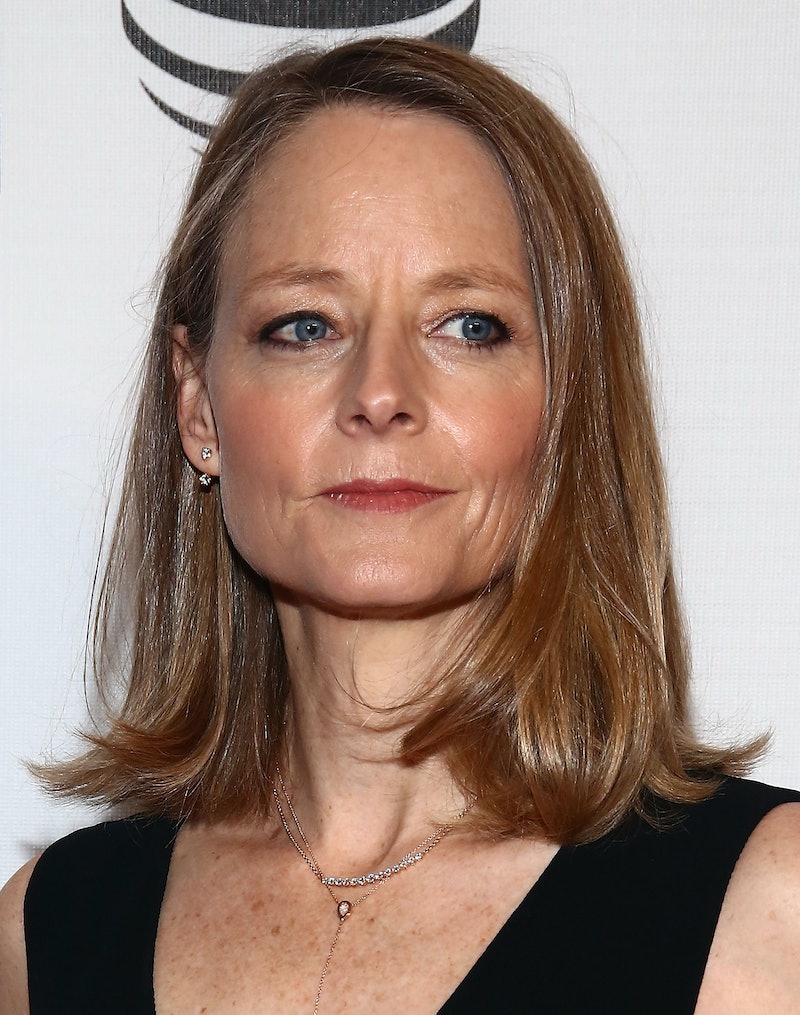 If there's one thing that women striving to enter a male-dominated industry understand, it's White House Project founder Marie Wilson's assertion that, "you can't be what you can't see." For many of us, the ambition to enter that industry far outweighs the intimidation we feel when we look at the people enjoying the most success in it and don't see ourselves. In an interview with Variety, Jodie Foster addressed the Hollywood gender divide while talking about becoming a director and finally getting her own star on the Walk of Fame, and her comments should ring true to anyone who has faced a similar glass ceiling. She told Variety:

I remember seeing my first actor-director and thinking, ‘That’s what I want to do.’ But I didn’t think I’d be able to because I didn’t see any woman directors ... I felt the best way for me to do it would be for me to write, so I went down that path.

Considering that Foster has been working in Hollywood pretty steadily since she was 3 years old (and according to the Variety interview, knew that she wanted to become a director since she was 6), it's upsetting, but all too relatable, to hear that a woman who we consider to be so powerful within her career still felt that gnawing intimidation that comes with a lack of female visibility in your desired profession. The fact that someone who's found as much success as Foster can be intimidated shows just how pervasive the problem is.

Having enjoyed a career in Hollywood from such a young age, Foster also makes for the perfect barometer of change, and offered this startling tidbit of insight to Yahoo! Movies back in January, which acts a terrific reminder at how much has changed in almost 50 years worth of cinema, though there is still work to be done:

I’ve seen many faces in filmmaking ... I made movies when there were no women. The only women were, occasionally, a makeup artist, but not always; a script supervisor, usually; and the person playing my mom. And that was about it.

With Foster finally receiving a star on the Hollywood Walk of Fame (and, on her own terms no less, accepting the accolade now that it's "in a conjunction with a movie I was directing," a role that obviously means a great deal to her), it feels like the right time to celebrate the longevity of her inspiring talent, particularly when considering the era with which she began working as an actor and the barriers she must have fought through in order to be respected and to win roles that arguably often went beyond the archetypes of "girlfriend," "wife," or "mom."

While Foster was scarcely approached as a representative for her gender back when she was an actor, now that she's also a director, she's been asked about the lack of female directors in Hollywood and continued to point out what a problem it is. In an inspiring interview at the Tribeca film festival this year, Foster broached the topic with a clear sense of frustration, stating that though she's "sick" of talking about the issue, it is very much "real," telling the audience very simply, "people still see … women as a risk and I'm not sure why."

She may be tired of talking about this problem (and likely tired of seeing it persist in Hollywood), but the fact that Foster continues to speak out about her own experiences with the gender disparity is extremely important, because she is now someone aspiring female directors can look up to. She also shows women battling against gendered obstacles in their own fields a different potential path of action: if you can't see the change, try to become the change.