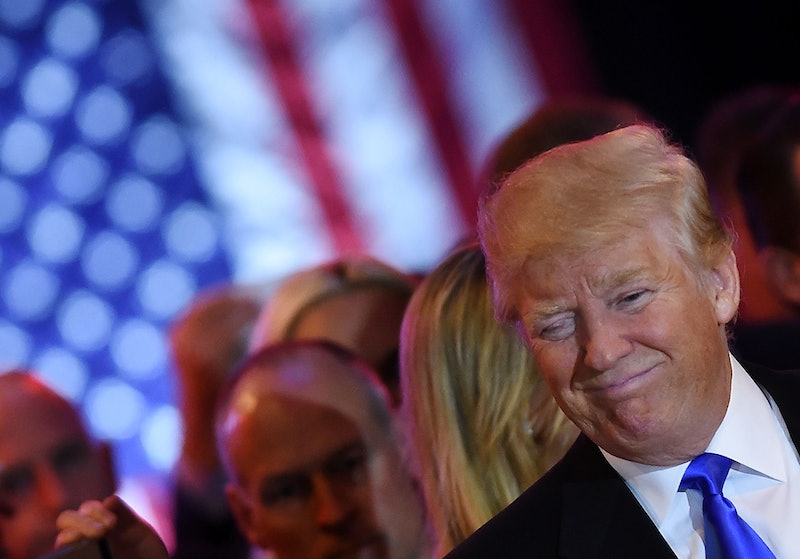 On Tuesday night before the Indiana election results were announced, Donald Trump's campaign manager, Corey Lewandowski, told reporters that the campaign had not begun to vet potential vice presidential candidates. But after sweeping the state, Trump's campaign is in a different place. Given that Ted Cruz and John Kasich are out, Trump's finally ready to start narrowing down a list. CNN reported Wednesday that two campaign sources told the network that the Trump team has started to make a short list for VP. When exactly Trump will announce his vice president, however, will depend on a number of things — like if anyone wants the job.

Wednesday morning Trump confirmed that he's putting together a short list to consider for the job. He's organized a committee to weigh in on the matter that includes his former competitor for the nomination, Ben Carson. He's hoping that whoever they find for him has political experience — ideally as an elected official. They also have to be a Republican. He explained on Good Morning America :

I have the business, let’s call them talents, and I think I’ll probably go the political route... "I think probably I would like to go with somebody with great political experience... Somebody that can help me with legislation and somebody that can help me get things passed and somebody that’s been friends with the senators and Congressmen and all so we don’t have to go the executive order route as much as Obama did, you know, where he can’t get anything approved so he just keeps signing executive orders.

Trump said there was no name in mind yet, but the campaign told CNN that some of their favorites include New Mexico Gov. Susana Martinez, South Carolina Gov. Nikki Haley, and Sen. Rob Portman of Ohio. Trump himself mentioned Kasich as a potential VP pick too. Pundits have put forward even more options. You'd think since they're talking names, it would mean they're close to making a decision. But it seems many of the contenders have one thing in common: They're not interested.

Both Martinez and Haley have said publicly they're not interested. A spokesperson for Portman said neither is he. Kasich, who until Wednesday had his own presidential aspirations, also said he wasn't interested as far back as a few months ago, and a source said nothing had changed as of Wednesday. Others that have preemptively declined? Jeb Bush, Scott Walker, and Lindsey Graham, who said it would be like "buying a ticket on the Titanic."

Now that Trump has all but officially clinched the nomination, their tunes could change. Governors Chris Christie of New Jersey and Mary Fallin of Oklahoma are interested. Former House Speaker Newt Gingrich too. He explained why ultimately more politicians will say yes. If a potential president says I need you, it would be very hard for a patriotic citizen to say no,” Gingrich told The New York Times. “People can criticize a nominee, but ultimately there are very few examples of people turning down the vice presidency."

That may be true, but when was there a nominee like Trump? Who knows how long this will take. We'll be waiting for Trump to find a VP candidate that likes him back — and that might be tricky.