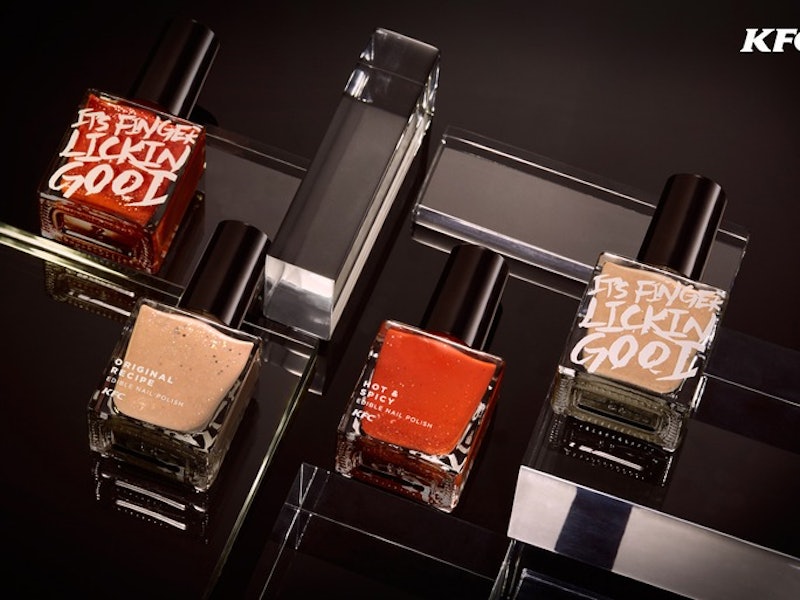 Edible nail polish? Um, OK. Edible nail polish that tastes like... chicken? Yep. It exists. KFC, aka Kentucky Fried Chicken, has created edible, chicken-flavored nail polishes. I am consciously electing to forego an analysis of how this promotional product relates to the fast food chain's long-running "Finger lickin' good" motto because it's beyond obvious. According to AdWeek, the naturally-based KFC nail polishes come in two flavors: Original and Hot & Spicy, which are two of the company's most popular recipes. You apply it like regular polish and lick at will. I know it flies against most ideas about nail polish and keeping your fingers and nails out of your mouth to avoid the temptation to bite them, but I'm serious! If a lickable, chicken-flavored nail polish sounds utterly delish to you, you want to know where and how to get it, right?

Well, it's not easy, since the polishes won't be widely available.The polishes, which come in colors that are actually wearable and pretty, are only available in Hong Kong. As reps said in a statement, "This campaign is designed to be intriguing and fun to increase excitement around the KFC brand in Hong Kong."

So, unless you have travel plans or want to troll eBay or other third party sites to nab a bottle of the lickable lacquers, you are pretty much SOL. However, Women's Wear Daily reports that the company is taking a Facebook poll regarding the favorite flavor and may use that data to launch the polishes at a later date. So there's some hope!

I can't deny that the shades are really on-trend, though. The polishes come in a neutral nude hue and a burnt orange x red shade. Would you wear these shades, without knowing anything about the lick factor? I would. I love that multi-colored mani, too. See, I am totally looking at this from a makeup nerd perspective!

The bottles and the colors are a really cool, modern, and actually fashionable way to execute an odd concept. You can keep questioning it, for sure. Or you can give a mental high five to the marketing and PR team that devised this.

I just peeps eBay and didn't see any of the chicken-flavored polishes up for sale... yet. That could change, though.