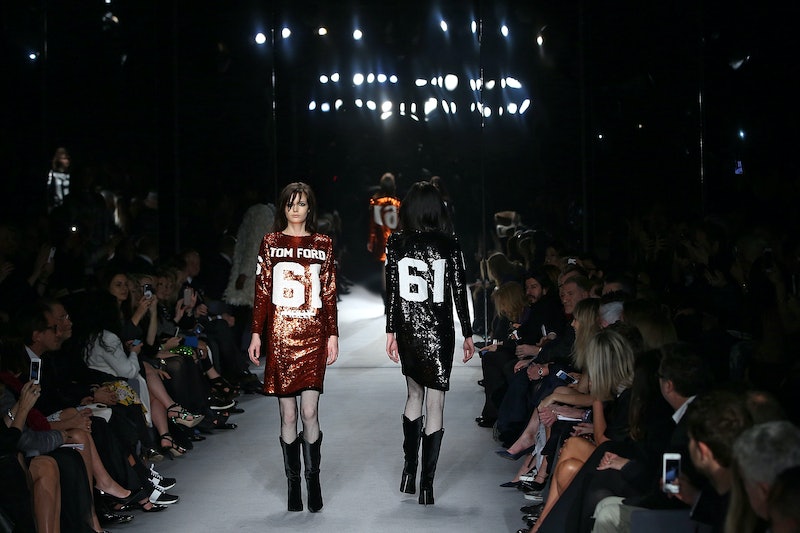 Leave it to Tom Ford to dispel a decades-long rivalry between social strata and opposing styles. In Ford's Fall 2014 Collection for London Fashion Week, Tom Ford broke all the rules and created a glamorous-grungy hybrid. Instead of choosing just one inspiration for his collection, Ford played with opposites, combining contrary, polar opposite muses for a collection that defied stereotype. The result is a collection that is as much rugged and athletic as it is darkly glamorous and refined.

The clash of extravagant glitz and blithe separates played out beautifully on the runway, manifesting in stereotypically casual pieces rendered in eye-popping colors and materials, and presented in unexpected pairings. One of Ford's most enticing ensembles resulted from combining the loungewear-staple jersey with evening-appropriate sequins. Hundreds of sequins adorned the sporty dress, which Ford made as an ode to the fake Jay-Z is fond of modeling.

Though Ford's designs pushed the boundaries of fashion propriety, each of the designer's ensembles boasted silhouettes that were just covered enough to offset the bold hues and fabrics choices. The consumer wearing Ford's latest line may be a fan of making a shocking statement, but Ford's designs allow for the clothes to do the talking instead of an excess of skin. Even basics became statement pieces in the collection with details like black leather trim on a white skirt and an ombré fade to a skirt suit transforming workday separates into pieces to be admired.

Ford's hair and makeup played out the same composite fantasy. Models were styled to look a little bit rock and roll, with imperfect, smeared black eyeliner and little else on the face, while their hair was left slightly mussed in a perfectly imperfect fashion. The resulting effect was that of a high school cheerleader who decided to defy convention and join a alt-rock band, all while maintaining an absolute devotion to the perfect smoky eye.

Let Tom Ford's latest collection be a lesson to all of us: when opposites attract, the result is often out of this world. And it may be time to dust off those vintage cowboy boots.