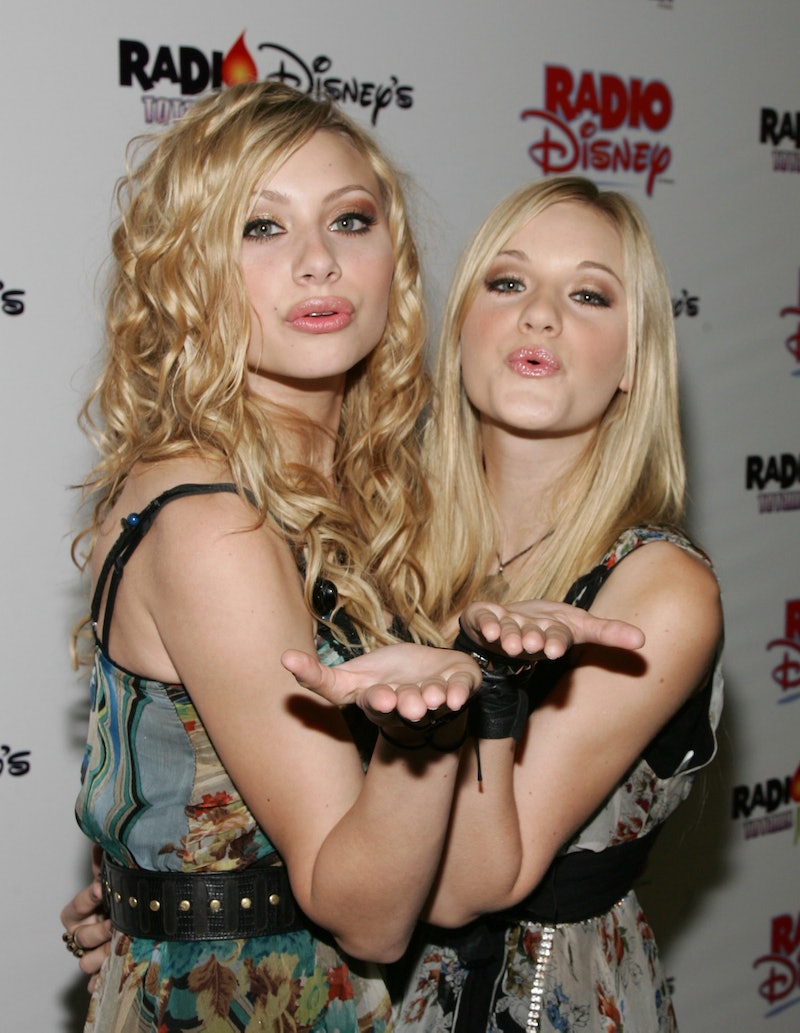 Your break from Aly & AJ may finally be coming to an end. The original Disney Channel duo made up of Alyson (Aly) and Amanda (AJ) Michalka — briefly renamed 78Violet in 2013 — have taken to Instagram to tease fans with the news that Aly & AJ are making new music. This could be a lead-in to the sister's first full-length album since 2007's Insomniac, and it definitely would be their first new song together since the 2013 release of the 78Violet song "Hothouse." But that doesn't mean that fans forgot about this pair of extreme #sistergoals. In fact, if anything, this news can help us make up for lost time by remembering Aly & AJ's greatest moments from their mid-2000s reign.

Whether you remember Aly from Disney Channel's Phil of the Future and shows like Hellcats and iZombie, or you've spotted AJ in films like Secretariat and, most recently, The Goldbergs, that doesn't mean you're properly appreciating them as the musical geniuses that they were in the heyday of the '00s. Their pasts are sure to help us determine what we can expect next. From television appearances to unforgettable music videos, true Aly & AJ fans may feel like these girls never left. Their music is, and always will be, so incredibly satisfying on repeat.

Here's a look back at some of the best of Aly & AJ.

if you were an avid Disney Channel watcher, then you know that the "Rush" music video played during every commercial. These girls were pretty edgy for Disney at those times.

Upon the release of Disney's movie, Ice Princess, Aly & AJ released the song "No One" as the movie's official track. Listening to it now still gives me the feels.

3. When Aly Sang An Aly & AJ Song On Phil Of The Future

The transition from Aly playing Keely on Phil of the Future to Aly & AJ being a Disney Channel sister band was not easy to pull off at first. That's why Keely just "happened" to sing the Aly & AJ song "Protecting Me" on one of the episodes.

4. Their "On The Ride" Concert Special

Did you want to know more about Aly & AJ? Well, Disney Channel had you covered. With a behind-the-scenes documentary and recorded concert special, these girls stole your heart in no time.

Admit it. This song has totally been added to your holiday song track list come the holiday season.

6. Who Could Forget Cow Belles?

Aly & AJ had a little bit of a Mary-Kate and Ashley Olsen thing going on, considering the release of their sister-themed Disney Channel Original Movie, Cow Belles.

This was probably one of the best episodes of MTV's hit show. Between an inside look at planning a party, recording an album, and getting their driver's licenses, Aly & AJ had the coolest Sweet 16 and 18 party you could have ever imagined.

This was the single that broke Aly & AJ out of Disney Channel and onto mainstream radio. And, to make this song even better, it was rumored to be about Joe Jonas.

However, Aly & AJ weren't just singers and actresses. They were writers too. They released their very own Rock N' Roll mystery book series that followed their fictional versions of themselves and came with their own guitar pick necklaces.

10. They Even Had Their Own Video Game

The girls also brought their talents to Nintendo DS — before the days of phone apps — and released their own Aly & AJ Adventure video game. Take that, Kim Kardashian.

Just when you thought this song couldn't have been remade.

Even though the release of "Hothouse" was so many years later, it was still just as amazing.

Now all we have to do is stay tuned until even more unforgettable Aly & AJ moments come our way. And the memories of their past will never fade.