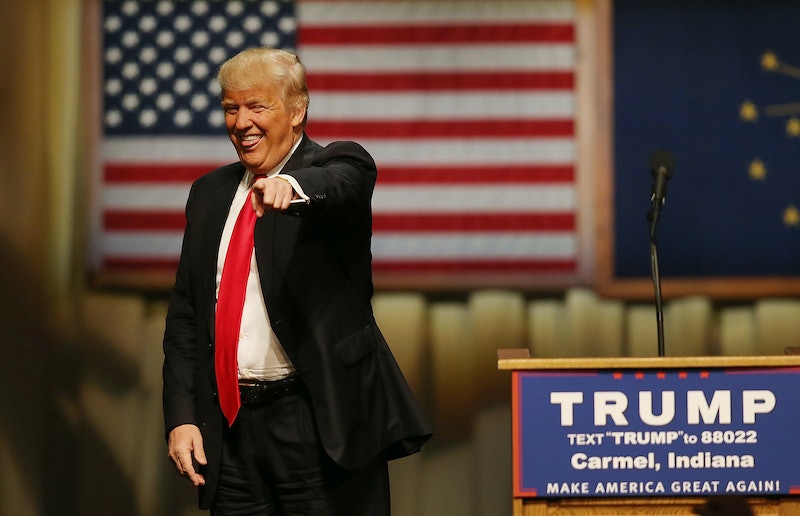 Donald Trump is elevating everyone's blood pressure, so it's important to know how to unwind. For me, I like to tuck away at a pint of ice cream if I need to watch a Trump speech (it numbs the pain). This past week, the Canada-based ad agency Sid Lee started a side project that's another option — called Trump Against Humanity. As The Daily Dot reported, it's a card game mirroring Cards Against Humanity except for how it entirely consists of Trump quotes. The idea is that Trump says so many shocking, disgusting, and/or insecure things that a game created out of them would be hilarious. But, I'm not actually sure: Is laughter really the best medicine in this case?

Don't get me wrong: Trump Against Humanity — the name itself already works so well — is an inspired stroke of creativity. It's got fill-in-the-blank cards like "Make _____ great again," which can then be matched with cards like "Mexicans," "micropenises," and "father-daughter incest." All Trump's best words. Frankly, it really does seem like Trump's speechwriters often just lifted everything from a Cards Against Humanity deck.

But here's the thing I take issue with about this otherwise brilliant project: It's emblematic of a culture that uses Trump's lighter sides to distract from his darker sides, which is a dangerous thing to do. It masks the horror of Trump's values as something funny and irreverent, detracting from us fully contemplating how he's a Frankenstein of all the worst parts of America and reframing his horrible remarks as merely laughable and dismissible party fodder. It's easy to poke fun at Trump's words about Mexicans and micropenises and forget that they're only the tip of a huge iceberg of racism, xenophobia, and narcissism — and that these ideas could potential come to fruition if he's president.

Trump Against Humanity isn't the only example of this. To a lesser extent, those memes that do things like comparing Trump's hair to Hostess Zingers are a similar diversion in that they reduce the grim reality of Trump into kitschiness. And Humanity Hates Trump is a game created by toy maker SCS Direct with the same idea as Trump Against Humanity. Denise Hawkins, SCS Direct's director of public relations, told the Chicago Tribune that "it's not about bashing Trump. It's really about having a good laugh, laughing with Trump." That's nice, except for when laughing with Trump turns into laughing about, say, discriminatory immigration bans or advocating torture.

That's not to say we shouldn't laugh about Trump at all. After all, Erma Bombeck once said, "There is a thin line that separates laughter and pain." Maybe we're all just laughing through the tears, like the crying-and-laughing emoji — which, along with the volcano emoji, really represents this election. We just have to be mindful of not reducing Trump to an emoji-like cartoon, because he is very, very much a real person with a real shot at the White House.