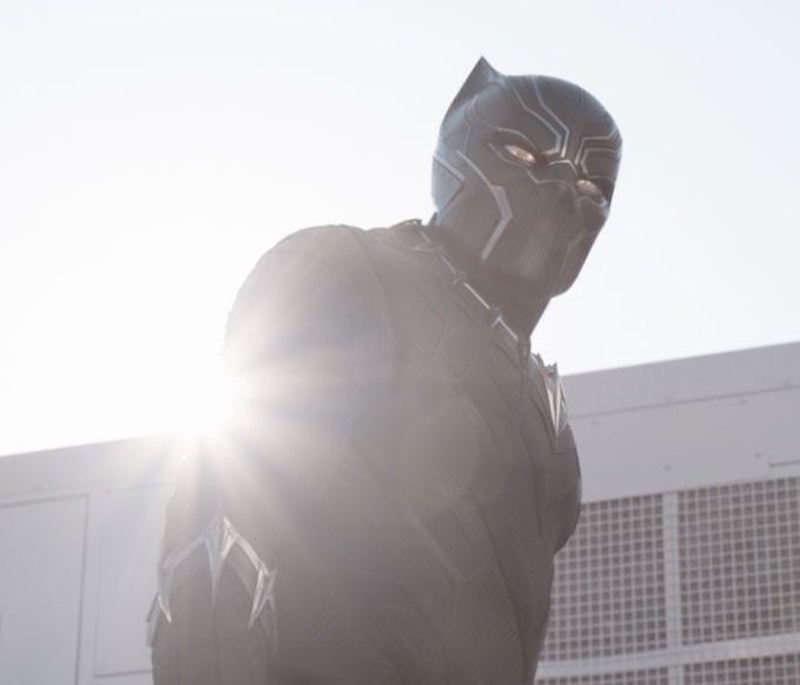 On May 6, Captain America: Civil War will be the second epic superhero battle to hit theaters in 2016. However, despite the attention surrounding Captain America and Iron Man, perhaps fans should be turning their attention to a whole new hero on the scene: Black Panther. The latest comic book character to come to life on the big-screen — played by actor Chadwick Boseman — makes his debut appearance in Civil War. And, while he may not be the central focus of the film in and of itself, he definitely was a character not to be overlooked by directors Anthony and Joe Russo. In fact, the Black Panther is the stand-out superhero of Civil War for one major reason.

Of all the heroes in the MCU, this was the one they made sure they got right. “Black Panther is so revered. It’s his first time on screen. We put so much pressure on ourselves. I think more pressure for that character alone than we did anything in the movie just because as a comic book fan I thought it was so important to get the interpretation of that character right," specifies director Joe Russo in an interview with Entertainment Weekly. And, with an actor like Chadwick Boseman behind him, the work done when the camera wasn't rolling really helped add up to what fans can expect when going to see the film.

“You can see from the other roles that he’s done that he builds a character from a very deep place. Like what he did with Panther in this movie was remarkable. He has a martial arts history that he himself was able to use and incorporate into how the character moved,” further explained fellow director Anthony Russo. “[His accent] was based upon influences around where the fictional country exists in Africa and he basically stayed in that accent throughout the entire shoot so that he wouldn’t lose it. Even when he was off camera he would speak in that accent.” Now that is some serious actor dedication.

However, to Boseman himself, the detail put into the character from both himself and the directors is just the cusp of what makes the Black Panther a great addition to Marvel's Cinematic Universe. Instead, as he mentioned in an interview with USA Today , it's his character's own unique personality that makes him stand-out. "You could be having a great time with him at a party, and all of a sudden he disappears and no one knows where he is," laughs Boseman. "It puts him in a position where he’s always going to be misunderstood by people. I love that aspect because it creates a dark side to him.”

It's a dark side that Boseman can both seriously delve into with his off-screen characterization work — and a mysterious element that both Anthony and Joe Russo were able to play around with on-set. I'm seriously expecting Black Panther to be quite the scene-stealer.

His appearance in Captain America: Civil War is still just the beginning. Boseman is set to head up his character, also known as T'Challa, in his own solo movie directed by Creed director, Ryan Coogler. Black Panther is currently set to be released in theaters nationwide February 16, 2018. But first, bring on May 6's premiere of Civil War, and the real star of that show: Black Panther.