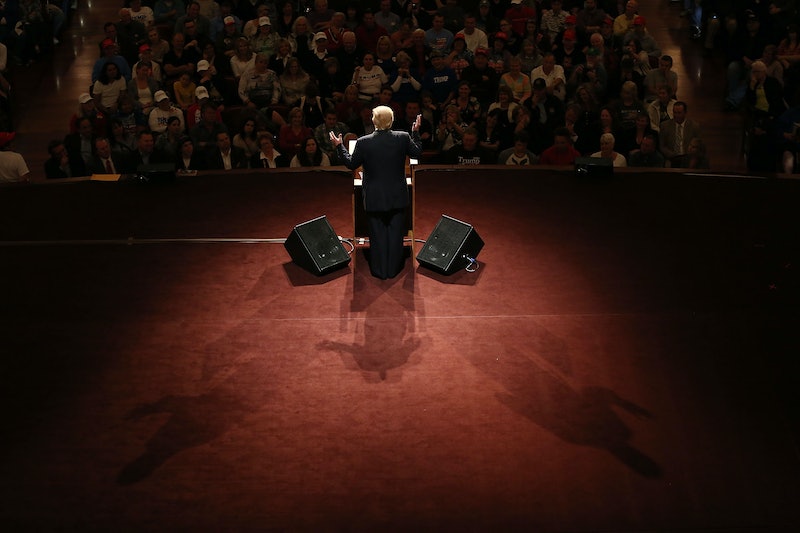 As we’ve come to dread #brands churning out horrible corporate pranks on April Fool’s Day, I suppose we knew in our heart of hearts we wouldn’t get through Cinco de Mayo without Donald Trump tweeting something cringey and horrible. We were not disappointed. Donald Trump loves Hispanics, it turns out! And tacos! He is making taco bowls great again! Trump Tower is surely the true pinnacle of authentic Mexican cooking. After all, as Trump has noted many times, he loves Mexicans — he employs so many.

Tasteless pandering to Hispanics is a time-honored political tradition, but rarely do we get something as tacky as what The Donald just tweeted. I was not pleased, for instance, with that seven things Hillary Clinton has in common with your abuela thing, partly because I have an abuela and despite the fact that she did read to me before bedtime — samesies, according to Clinton — her life has been a little different than the secretary’s. And there was the Ted Cruz-Marco Rubio “no, it is I who am the more Latino one” shouting match during a February GOP debate. But none of that was nearly on the same level of bad taste as the following, about which I went through most of the five classic stages of grief:

And then, bizarrely, the plot appeared to thicken:

In the end, it seems that the Trump Café does indeed serve a taco bowl, though the Trump Grill that The Donald referred to in the tweet still does not, according to Kaczynski.

Hillary Clinton was quick to jump on the horrible hypocrisy in Trump's Cinco de Mayo tweet:

To get much more cringe-inducing than literally writing “I love Hispanics!” after making a (factually inaccurate) reference to how a white man’s establishment makes the best tacos, Trump would have certainly had to don some sort of sombrero-and-maraca ensemble while declaring that he once went on spring break in Cancun and it was great. Because what is Hispanic culture if not taco bowls?! Trump’s taco bowls! The whole thing makes me want to slam my head softly but repeatedly into my desk. The day is yet young, so there’s still a chance we might get updates on the ways in which Trump loves Mexicans, possibly a selfie of him standing imperiously in one of his many kitchens while Mexican workers make hesitant thumbs-up signs around him, or a declaration that he enjoyed the classic film Nacho Libre.