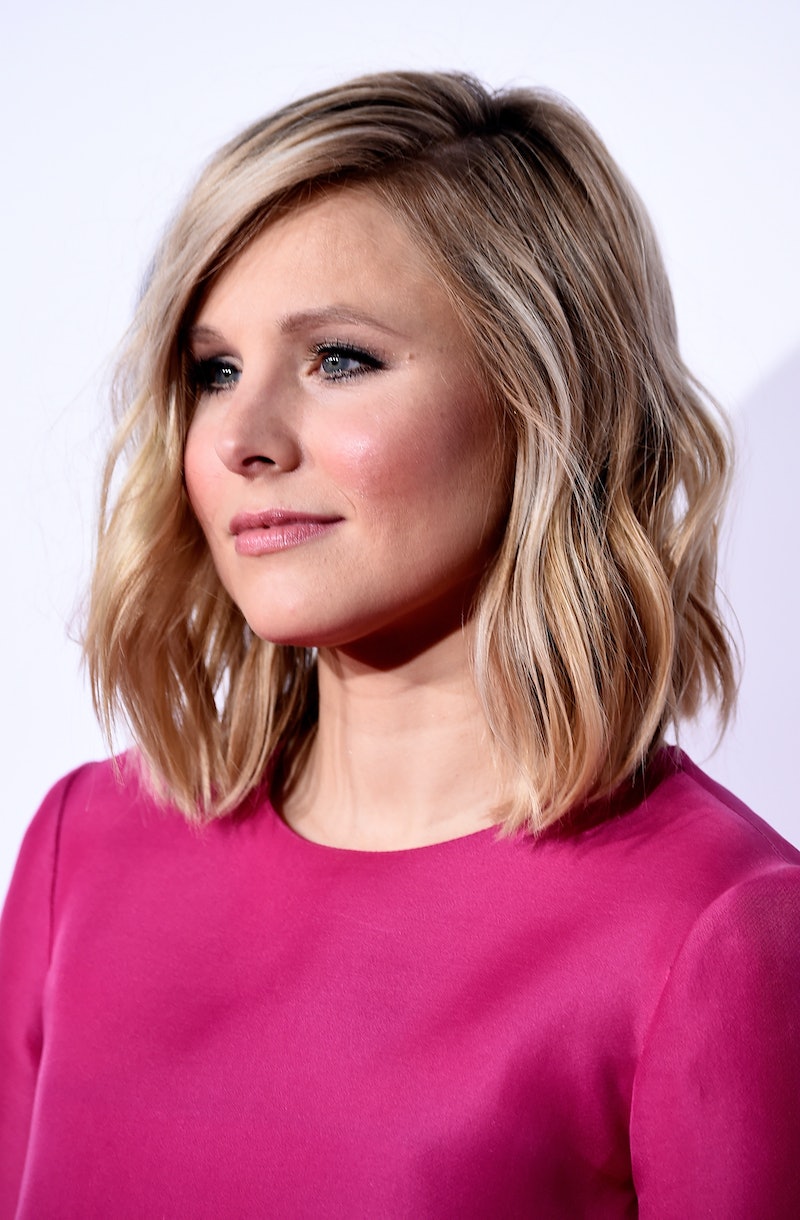 Despite playing the confident, super snarky, lioness detective Veronica Mars on screen, Kristen Bell hid a big secret behind the cameras. The 35-year-old mother of two was privately suffering, going through the motions of adulthood and Hollywood. She was struggling with her own mental stability, since the age of 18, but it was only during an Off Camera interview with Sam Jones in early April, 17 years later, that Bell opened up publicly about her battles with depression and anxiety.

"I'm extremely co-dependent" Bell said looking Jones head on. "I shatter a little bit when I think people don't like me, that's part of why I lead with kindness and I compensate by being very bubbly, because it hurts my feelings when I'm not liked," she continued. "And, I know that's not very healthy, and I fight it all the time." Though Bell recalls being popular in school, she remained nervous at the fact that under the surface, people were not accepting her for who she was. "I changed who I was often. I changed my interests, based on what my friends liked and I really didn't realize that until I was in my 30s. I had sort of changed," she said.

"I struggled a lot with anxiety and depression. My mom sat me when I was probably 18 and she said, ‘There is a serotonin imbalance in our family line and it can often be passed from female to female.'" Bell's grandmother even underwent electroshock therapy, and as a result of her mother having to cope with her grandmother's illness, she ensured that Bell had open conversations about the issues plaguing their worlds. “[My mom’s] a nurse and when I was 18 said, ‘If you start to feel like you are twisting things around you, and you feel like there is no sunlight around you, and you are paralyzed with fear, this is what it is and here’s how you can help yourself,'" Bell said.

As I listened to the unraveling of Bell's confession, I realized how much it spoke volumes to me. But what I couldn't believe was just how much of the exact same inner war we faced together. When I was 19-years-old, I was diagnosed with major depression. Evidently, my seasonal affective disorder, also known as SAD, a debilitating mood that I experienced during the winter and fall seasons, worsened over the course of just one year. I felt trapped in my own mind. Like Bell, no one thought that my happy-go-lucky persona surmounted to depression, regardless of the fact that my lineage suffered with the comparable issues and I was inevitably fated with the identical diseases. I began to fight a battle not only with myself, but those around me. It was until three years later, that I knew, it isn’t in my head. It isn’t a faze. It’s real.

"I mean, I present this very cheery and bubbly person, but I also do a lot of work," Bell explained. "I do a lot of introspective work and I check in with myself when I need to exercise and I got on a prescription when I was really young to help with my anxiety and depression and I still take it today. I have no shame in that because my mom had said to me, ‘If you start to feel this way, talk to your doctor, talk to a psychologist, see how you want to help yourself, and if you do decide to go on a prescription to help yourself, understand that the world wants to shame you for that, but in the medical community, you would never deny a diabetic his insulin. Ever,'” Bell remarked. “But for some reason, when someone needs a serotonin inhibitor, they’re immediately crazy or something.”

As Bell continued to talk about the interesting double standard and ending the shame stigma, I began to cry. She admits that she doesn't often have the opportunity to talk about her mental illness, but the fact that she did in this video left me speechless. Not many celebrities cut open a vein and speak candidly about their lives, typically most don't. But because Bell stands strong in her convictions on depression and anxiety, a common shame to talk about mental issues is pulled from the shadows and ultimately, instead of hushing more and more sufferers, we can make noise. I can make noise.

Today, anxiety and depression collectively affects more than 54.8 million people, aged 18 or older in the United States. However, when people like Bell candidly discuss their stories and allow us to feel not alone or ashamed, it matters.

For more on Bell's full interview, you can watch it here.