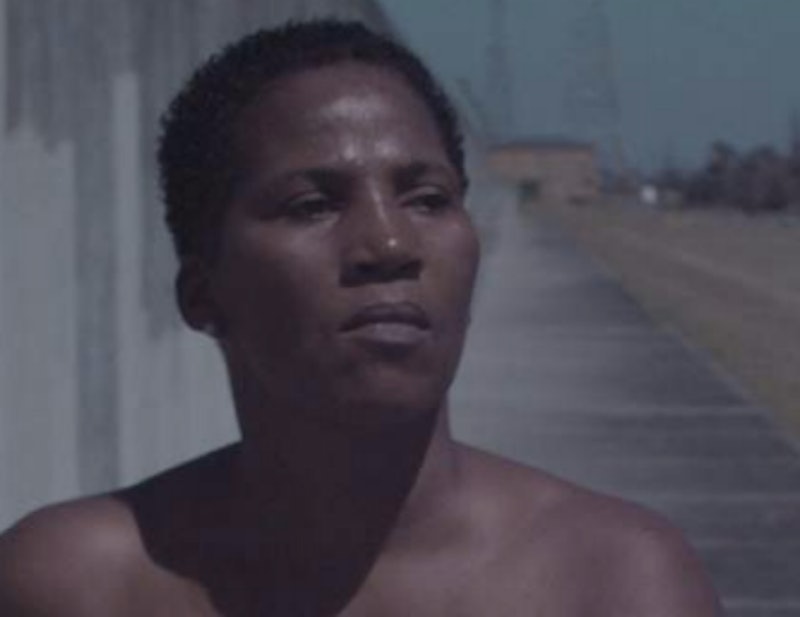 When Beyoncé's Lemonade premiered on HBO, it immediately took the world by storm. There's a lot to dive into when it comes to the hour-long visual album, from the messages about family and black culture to the endless hits, but there is one message you might've missed in Lemonade: that of Paulette Leaphart, a breast cancer survivor who is taking pride in her battle in an extremely powerful way.

Leaphart lives in New Orleans, and when there was a casting call for children in the city to be part of a "superstar's" new project, she took her 8-year-old daughter to audition, she tells Bustle. But soon, it was Leaphart herself who was cast. She got into a conversation with a casting agent about her breast cancer story and showed her the trailer for Scar Story, a documentary film that is being produced about the 1,000 mile walk she is currently taking from her hometown of Biloxi, Mississippi to Washington, D.C. Leaphart is walking while topless, the scars from her double mastectomy on full display. "The next day I got a call and an email saying that they wanted to use me," she says.

Of course, the mother of eight wanted to know what the video was going to be exactly, but that was top secret information:

[The casting agent] said, "I can't tell you. All I can tell you is that she's a super superstar." And then when she said that, I knew. I said, "Oh you must be talking about Beyoncé" ... I was like, what kind of video would Beyoncé — I don't wanna be in no "Drunk In Love" and all of that. I'm a Christian ... And [the casting agent] kept saying, "Trust me its powerful. You wanna be a part of this"

Leaphart ending up filming her part for the "Hope" section of Lemonade ("They took me to makeup and hair. And I didn't even have hair. I was baldheaded and I had a hairdresser. Check that out!") and met Beyoncé in person. She says, "We talked for a good 10 minutes ... I said, 'Well, if you walk a block with me you'll meet [my daughters].' And she was like, 'I was really thinking about doing a mile.'"

But before she was cast in Lemonade or Scar Story, Leaphart had already started getting her story out into the world. "God said that he wanted to use my chest and I didn't know at that time what he meant," Leaphart tells Bustle. "And I didn't fully understand what he meant by that until after my double mastectomy and that day on the beach."

After having a double mastectomy, the 49-year-old was left unable to get reconstructive surgery due to a blood condition. She was "devastated," but everything changed during a beach trip on Labor Day weekend in 2014. "I was walking on the beach when the Holy Spirit said take my shirt off and take pictures," she says. "I know the voice and I know the Spirit, so I obeyed. You know, reluctantly, but I did."

People were standing around staring, and I saw a couple of ladies, tears was rolling down their face. And when they started crying, I starting crying ... And then I heard everybody around me clapping, and then that's when a couple of ladies walked up to me and said, "Thank you. That was the most powerful thing I've ever seen."

One of Leaphart's daughters took the beach photos and later suggested that her mom post one on Facebook, noting that it could literally save lives. "When I was told I couldn't get reconstruction I went on the Internet looking for a picture because I wanted to know what it looked like to not have breasts," she says. "And I couldn't find any pictures, so when my daughter said that, I was like, she's right." This photo ended up going viral and brought Leaphart messages from people with cancer all around the globe.

The next step in Leaphart's life came, again, in a message from God:

He gave me the vision to walk across the country baring my scars, and the Spirit said walk a thousand miles. And when I started doing my research I found out that it was a thousand miles from my hometown to Washington, D.C. And he wanted me to walk to D.C. because he's tired of his kids crying out to him for help. And he asked me to be a vessel, and walk and deal with the government; put my scars on the table because people are dying. Not because of the cancer, but because they can't afford the treatment. It's crazy. I lost everything fighting.

On April 30, the mother of eight set off on a 1,000 mile bare-chested walk from her hometown of Biloxi, Mississippi to the steps of Congress in Washington D.C. She's putting the scars from her double mastectomy on display to inspire other survivors and to send messages both about body confidence and about the cost of healthcare not allowing those with cancer to get life saving treatment.

"What she's doing has so many potential enormous positive impacts. She can change so many things," Scar Story director Emily Mackenzie tells Bustle. "And I think more than anything, for me, seeing someone doing what she's doing is just an enormous exercise in faith and hope."

Leaphart expects that she'll complete her walk — which she says is going "great" so far — and make it to D.C. sometime in June, but for now, anyone who wants to follow her journey can follow her Facebook page, Prayers for Paulette8Children. You can also donate to her GoFundMe page to support the organization she'd like to start called SCARS.

Of course, Beyoncé is on her epic Formation Tour at the moment, so whether she ends up meeting Leaphart for a mile will depend on her schedule; Leaphart is more than understanding.