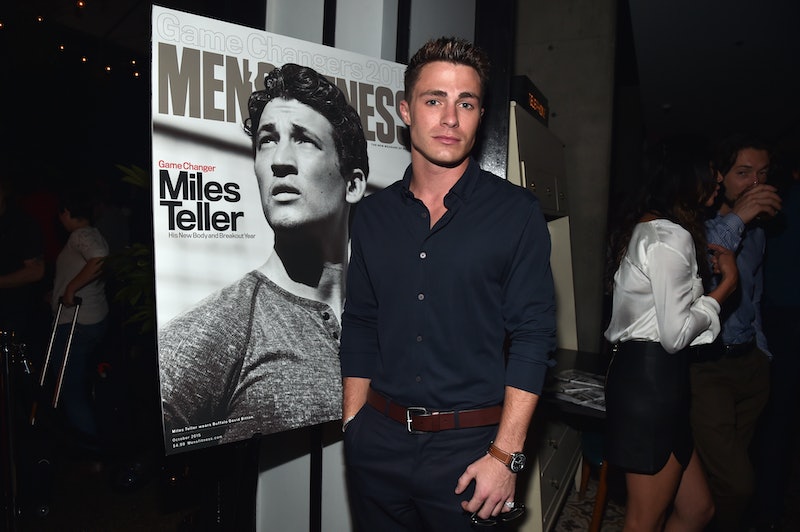 Headlines about celebrities' sexualities flood tabloids, especially when the stars in question are tight-lipped about their love lives. However, one young star is finally ready to open up about the questions that have followed me around during his acting career — and he's no longer holding anything back. Arrow and Teen Wolf actor Colton Haynes publicly came out as gay on Thursday in an interview with Entertainment Weekly, and though the road to coming out was difficult, Haynes is paving a path for his fans to be open about who they really are.

According to Entertainment Weekly's interview with the former MTV actor, Haynes has been out to friends, family, and even business connections for years — for Haynes, being gay wasn't something he felt the need to keep hidden in his private life. However, Haynes reportedly was advised not to talk about his sexuality publicly, and because of this, he kept it a secret from his fans. Then, in January, when a Tumblr user asked Haynes about his "secret gay past" Haynes replied with the truth: "Was it a secret?" The bloggersphere quickly picked up the story, but Haynes, who was in the hospital for anxiety at the time, did not wish to make a statement about what he meant by the post.

Today, Haynes is seemingly ready to be out of the closet to everyone — not just the people in his personal life. Though fans have zero right to know the intimate details of an actor's life, Haynes' reveal has the potential to inspire both his fans and other stars who remain in the closet. Coming out is certainly a personal choice, but it's also one that can help normalize sexualities that fall outside of the heterosexual paradigm.

No matter what Haynes' intention for coming out, seeing him happy and healthy is the best message that he can send to his fans.