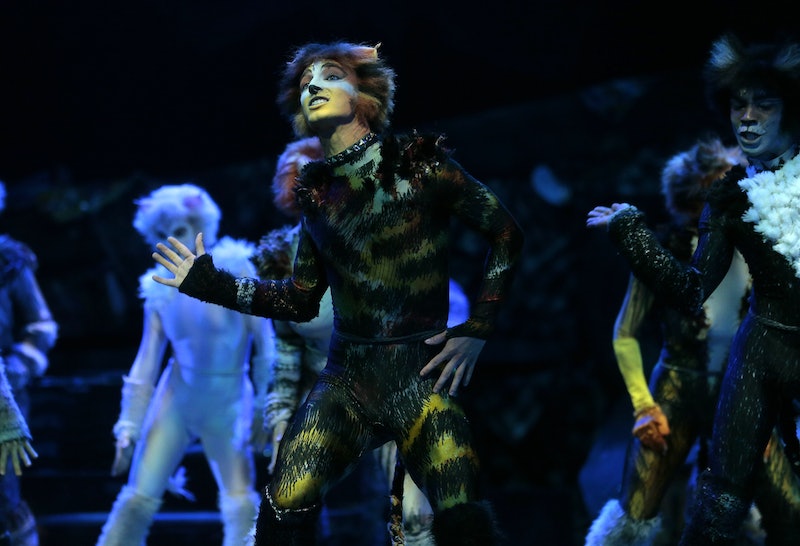 Does anyone care about Cats The Musical? Um, hi. I do. I think Andrew Lloyd Webber is an underrated genius, and Cats is so catchy that watching YouTube live performances of it on loop is the only jellicle choice (Cats joke!) a person can make. So imagine my excitement to learn that Cats The Musical as movie is a thing and it's happening soon, thanks to Tom Hooper. Who's Tom Hooper? Oh, no big deal, he only directed Les Miserables. You know, the one with Anne Hathaway in, the one she won an Oscar for. No. Big. Deal. It's just going to be an amazing movie that wins a whole pile of prestigious awards, but that we also want to click our fingers to.

The cosmos must be really into Cats, because this is great timing: Cats is returning to Broadway this summer, so you can get a live refresher course before the movie drops. Hooper's rumored to be yearning to cast model-turned-actress Suki Waterhouse in the production, but I can't say I care a huge amount about the human stars. My question is: which of everyone's favorite Internet Cats should be cast? Shh. You know you want to know, too.

Victoria The White Cat Should Be Played By Sam Has Eyebrows

Sure, Sam's a boy, but it's 2016. Anyway, Sam is the most agile looking out of the famous white internet cats, which is important for this role, since Victoria leads a dance that signals the beginning of the Jellicle Ball. Also, those eyebrows are really, really cute.

Jennyanydots Should Be Played By Maru

See above vis a vis Maru playing Jenny. I'm all about finding the right cat for the character, not the gender, OK? Anyway, Jennyanydots or "The Old Gumbie Cat" "sits and sits and sits and sits" all day. I know Maru likes to slot himself into small spaces, but, once he's there, he loves to chill.

The defining characteristic of this role is that the cat is a bit of an assh*le. To quote Cats, "for he will do as he do and there's no doing anything about it." Anyways, both Grumpy and Garfi have the requisite level of sass.

Colonel Meow sadly passed away in 2014. But, as the Guiness World Record holder for the longest fur on a cat, he would have been a great candidate to play the unkempt Grizabella (obviously we'd have backcombed the fur).

Bustopher Jones Should Be Played By Henri

Henri is big, swanky looking, and dark-furred enough to play this most elite of cats.

Old Deuteronomy Should Be Played By Shironeko

Shironeko embodies ultimate zen chill and thus wisdom. Who better to play this most experienced of cats, who "has lived many lives" and "buried nine wives (And more, I am tempted to say — 99)?" Might be challenging getting him to open his eyes, though.

The Great Rumpus Cat Should Be Played By Venus

The Great Rumpus Cat is distinguished by its flashing red eyes — and sure, Venus doesn't have those. But what she does have is incredibly distinctive, arresting eyes (thanks to her split color face), so, for me, she gets the role.

Yes, there are so, so many Cats cats I haven't yet cast, such as Gus, Jellylorum, Skimbleshanks, and Macavity. But I hope you're as excited about the movie as I am, and fingers crossed the luminary Internet felines of our age get cast and not cat-unknowns, or worse still — humans.