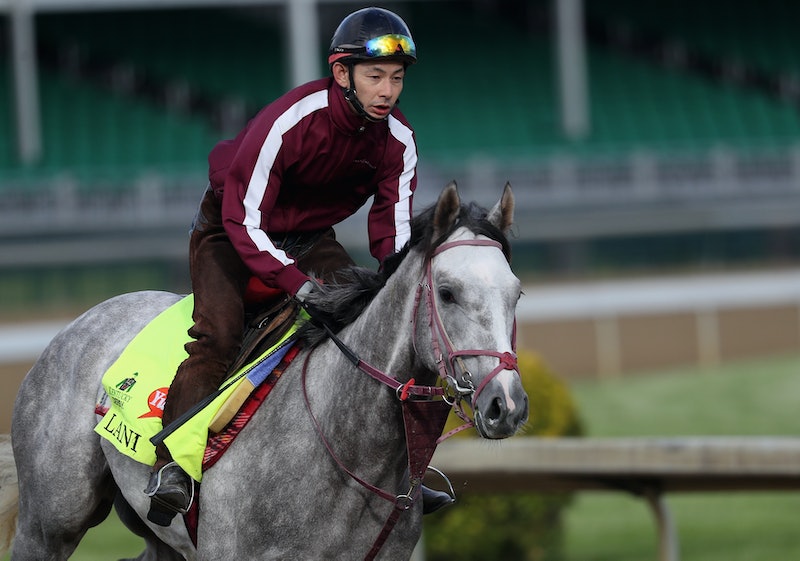 Just like wrestlers, jockeys must meet strict weight restrictions that often force them to closely monitor their bodies. On Saturday, some of the world's best jockeys will compete in the annual Kentucky Derby in Louisville, and you'll probably notice that the athletes atop the racehorses are all pretty small. Exactly how much Kentucky Derby jockeys weigh may shock you though, as the famous derby has a very low weight maximum.

Every race has slightly different rules, with weight requirements ranging from 112 to 126 pounds, including jockeys and about seven pounds of gear on the horse. The Kentucky Derby falls on the higher end with a maximum of 126 pounds, meaning jockeys themselves can't weigh more than 119 pounds — the average weight of a 14- to 15-year-old boy. The fact that most jockeys are men makes the low limit even more extreme. There aren't any rules limiting jockeys' height, but they tend to be shorter because of the weight restrictions, usually falling between 4'10" and 5'6" tall. So, they have small athletic builds that allow them to ride racehorses without hindering the animals' speed.

As you might expect, the strict weight limit puts a lot of pressure on jockeys to stay much smaller than average adults since they simply won't be allowed to ride if they weigh in over 119 pounds Saturday. A 1995 study on jockeys' health by the Chicago Rehabilitation Institute revealed that 30 percent of jockeys throw up to lose weight, 69 percent skip meals, and 14 percent take laxatives.

The unhealthy practices were historically reinforced by "heaving" or "flipping" bowls in jockeys' rooms at race tracks for the athletes to vomit in before races. The bowls, usually a square porcelain bowl with a hole standing higher than a toilet, were removed from the Kentucky Derby's Churchill Downs track 10 years ago, but that hasn't entirely eradicated the prevalence of bulimia in the sport. "Whether it’s a toilet or a heaving bowl, it’s still there," retired jockey Darrell Haire told Fox News Latino's Bill Vourvoulias in 2014.

More common than vomiting though is dehydration, and the same 1995 study found that 67 percent of all jockeys "hot box" in saunas, allowing them to lose a few pounds a day.

Animals rights organizations strongly oppose horse racing because of the toll it takes on the animals, but the humans involved are also placed in strenuous conditions. "We're just in the process now of educating jockeys on safe dieting and bringing up minimum weights," former jockey Jeff Johnston told CNN's Sheena McKenzie in 2012. "The U.S. is a lot behind Europe in that sense."