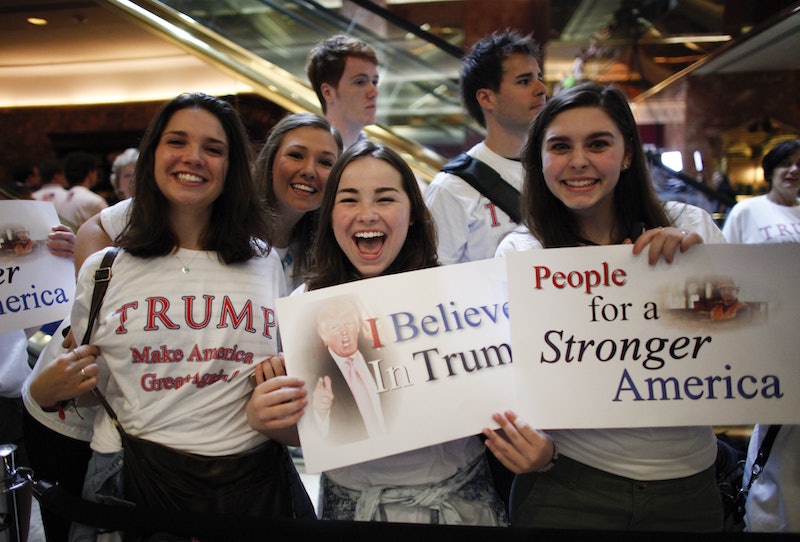 We've all heard Donald Trump say that he wants to "make America great again," and many of his supporters genuinely believe in this vision. The Democratic Party has satirized this view on numerous occasions, going so far as to release a hat that says "America is Already Great." But what are any of them talking about? America was never great, at least not for marginalized people, and while it's better now in some ways, it's certainly not great now.

People are out there claiming that this country has to be made great "again," and I'm here trying to find a single moment in history when America was actually great for everyone. Was it during slavery? Was it when the United States dropped atomic bombs on Japan? Was it when schools were completely segregated? Was it when homosexuality was criminalized and queer and trans spaces were frequently raided by police? Was it when we continuously failed to acknowledge and respond to genocides? Was it when indigenous land was stolen by white settlers?

Or is it great now? As we send exorbitant amounts of aid to Israel, an apartheid state? As increasing numbers of trans women — especially trans women of color — are murdered? As black folks face disproportionate amounts of police brutality, police violence, and mass incarceration? As the racist War on Drugs criminalizes nonviolent drug use and addiction? As we continue to erase indigenous narratives while occupying indigenous land? As we honor former slave-owners and perpetrators of genocide but not the people who resisted them? As access to sex education, contraception, and abortion continue to be restricted?

To the Democratic Party: You are not helping anyone by saying that America is already great. Some good things have happened during the Obama administration, this is true, including a reduction in the unemployment rate, the creation of many new jobs, and the implementation of the Affordable Care Act. But that does not mean that America is great for everyone who lives here. Even as Obama has instituted executive orders on immigration like DACA and DAPA, his administration has deported more immigrants than any previous president. Even as prominent Democrats condemn Trump's outrageous proposals, black and brown neighborhoods are heavily policed and surveilled.

When Trump says he wants to make America great "again," I can only imagine he's hearkening back to days when he could more easily get away with being a racist, sexist bigot. But it turns out he can still do that now, because there are plenty of people out there who are constantly upset that they can't be as terrible as they want to be. However, when self-proclaimed liberals try to make the counterargument that America is actually already great, they're masking all the systemic oppression that's still in place by choosing instead to congratulate themselves for all the "progress" they've made.

I am so lucky. I moved to America with my parents when I was 2 years old, and I only became a citizen a year ago. I wouldn't be able to sit here and write this if it hadn't been for their brave decision to move here. I am so thankful for the opportunity to express this anger that I carry with me every day, and I know that I wouldn't be able to do this everywhere else. And at any given moment, I am surrounded by such powerful resistance.

But my personal ability to voice my beliefs is an act of resistance in and of itself; it is a way of reclaiming space, and it does not negate the fact that millions of people don't have this supposed basic right, or the platform to do so. There are things about this country that are great, and there are things about it that are not, though its institutions are inherently colonial and do not exist to serve marginalized people.

But until every single person here can at least live without fear of violence, erasure, torture, murder — then America is not great, and it is hypocritical to insist otherwise.