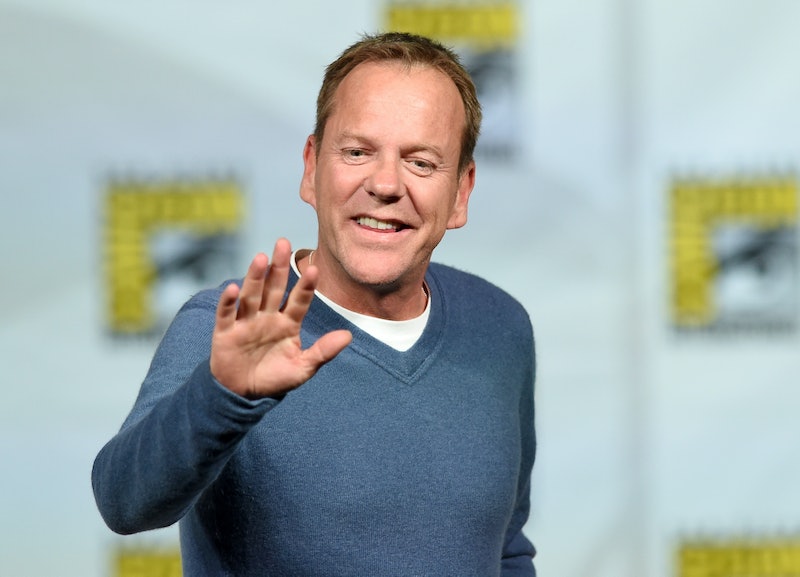 It's official: Kiefer Sutherland is returning to TV with a new ABC series, Designated Survivor, debuting this fall, but there's a twist — this time around, he is the president. Yup, Sutherland has finally come full circle, and I for one can't wait. After starring on the hit, heart-racing drama, 24 for nine seasons and playing the infamous Jack Bauer, a director of field ops for the counter-terrorist unit in L.A., Sutherland became quite comfortable staring as the president's personal hero, clearly the 49-year-old actor was due to evolve.

Though Sutherland is still tied to the 24 series, taking on the role of executive producer for the reboot 24: The Legacy, Designated Survivor centers around Tom Kirkman (played by Sutherland), a lower-level cabinet member who suddenly becomes president of the United States in the wake of an overwhelming terrorist attack in Washington, D.C. that kills everyone before him in the line of succession. Kirkman is forced to navigate through an extraordinary situation of protecting both his family and the country before further disaster strikes. Alongside with Sutherland, the straight-to-order, 13-episode premiere series will also star Natascha McElhone, Maggie Q, Kal Penn, Italia Ricci, LaMonica Garrett, Tanner Buchanan, and Adan Canto.

Back in January, Sutherland spoke to CBC News about the series, relating Designated Survivor to U.S. politics today: "If you've watched the political cycle that's happening in the United States right now, I think it's one of the most extraordinary — and I do not mean that in a positive way — [campaigns] that I think I've seen in a very long time," the Canadian-born actor began. "I think our show, certainly, will deal with the fact that voters are really disenfranchised from what has become the political process here."

"In a very kind of working-man's way, [Tom] uses common sense and his own sense of right and wrong to do what he thinks is best for the country. And the way he approaches that, I think, is very human." Sutherland said. "I think that that's something that we sometimes lose — whether it be in Canada or the United States — we have a feeling that we have lost that in the political process."

Even though Sutherland is reappearing in our living rooms after a two-year lapse, the Touch actor admitted to the "similar characteristics" that this series has to 24; however, Sutherland remarks that Tom is much more of an ordinary man than he is a "Jack Bauer-type" ace.

Ugh, can fall come any faster? Still, to tie your excitement over until seeing Sutherland back on our TV screens next season, get your first look of Designated Survivor below: