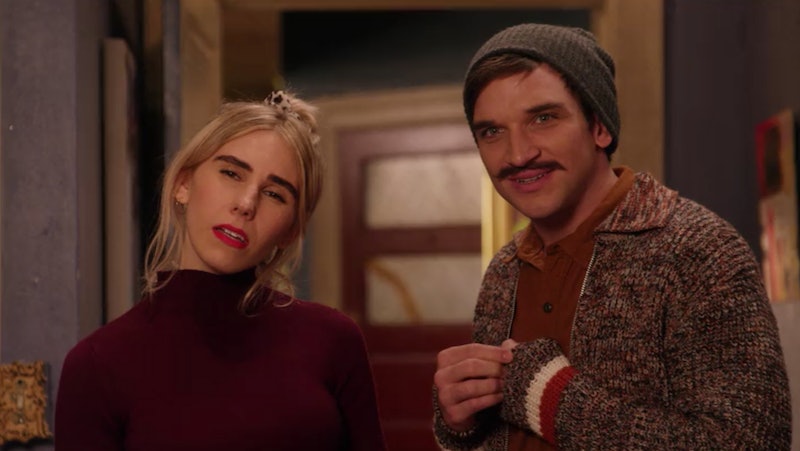 If you weren't a fan of the self-conscious kookiness of Unbreakable Kimmy Schmidt Season 1, that shouldn't put you off getting stuck into Season 2, which is radically different in its comedy and pacing. As Matt Zoller Seitz has already noted, Kimmy Schmidt Season 2 is where the show has finally settled into its stride: after moving past all the lengthy (and goofy) explanations of background and necessary plot that made up so much of Season 1, the show is finally free to relax into its rhythm. What this has meant in practice is that the political undertones of the show that were so subtly referenced in Season 1 have been drawn to the forefront of the show.

Unbreakable Kimmy Schmidt's political leanings have always found their voice in one key character: the inimitable Lillian Kaushtupper. We first encounter Lillian in a way that's representative of the character. Although she is letting an apartment to unemployed performer Titus and he hasn't paid rent in months, rather than evicting him, she places an ad to find him a roommate to cover the rent. She's immediately marked out as not your typical New York landlord.

As Season 1 continues, Lillian doesn't just make asides about gentrification (arguing the bodega round the corner's stocking greek yoghurt, bottled water and meat that hasn't yet reached its expiry date as incontrovertible evidence that hipsters are now in their neighborhood), but stalks the streets with a club studded with nails, ready to attack any fancy cars parked near the apartment.

But somehow, the lightness with which the show treats this behavior — as the typically kooky actions of one of the show's less prominent characters — was misleading. It led viewers to believe this was a minor plot point, played mostly for laughs. But as we've come into the second season, gentrification has become one of the show's most important topics, and one that makes you laugh and pulls at your heart strings all at once. It takes a couple of episodes for the show to broach it, but when it does, it does it big time with Season 2 Episode 3 "Kimmy Goes To A Play!"

Lillian opens the episode by kicking over a sign announcing the opening of a performing arts space opening in their neighborhood, and tells the ever-peppy Kimmy and the self-absorbed Titus: "This neighborhood is changing and none of us are gonna be able to live here!" They respond in character: Kimmy shrugs it off with optimism while Titus decides to use the change to further his own career, by launching his one-man show there. What's troubling is that most viewers could probably respond more closely with either Kimmy's easy dismissal of it or Titus's opportunism than with Lillian's investment of her time and energy in battling the change.

It's easy to dismiss Titus with his larger-than-life theatricality as being in no way intended as an Everyman. Yet when it comes gentrification, he really is. Like most of us, Titus will only become really fired up about gentrification when it affects him personally. As such, he only starts getting mad when he realizes the place he originally met Lillian in has now been converted into a vape shop. When some entrepreneurial hipsters come snooping around a disgusting old restaurant Mabel's that Lillian nurses fond memories of, Titus sets up a velvet rope at the back of the restaurant to make it seem like it's a happening hipster speakeasy – spooked by its lack of authenticity, the hip couple leave, grossed out. But the show stays true to the complex reality of gentrification as well as its one-two punchline rhythm: the scene below delivers a visual joke when Titus and Lillian realize that by spreading the rumor that Mabel's is home to a speakeasy, they've inadvertently made it hip.

This nuanced look at the destructive currency of cool is what gives Season 2 its depth and heart as well as fueling its comedy. Lillian makes spirited attempts to combat the neighborhood's change using the tactics she would have used in the 1970s: she stages a protest outside a new cafe. Punchline? The barista comes outside to offer her refreshments because she thinks Lillian's sweet. Lillian chains herself to a digger to protest a new development. Punchline? She's chained to the wrong part and the digger's free to build with her attached. When a news channel films her sleeping attached to a moving digger and the video goes viral, the presenter announces "and the video may have actually raised the neighborhood's profile with Internet havers" and Lillian groans. The show makes no bones about it: in modern day New York, grassroots protesting can only do so much against vast real estate businesses and comedy internet videos.

But the show always makes sure it delivers its message in the quirky comedy stylings that make it Unbreakable Kimmy Schmidt, meaning even those viewers who could care less about politics and gentrification are engaged by the topic despite themselves.

We've all but lost hope when Lillian gets approached by ISUS — the unfortunately initialed The Interborough Society For Urban Settlement, who are "devoted to curtailing real estate development in New York's historic neighborhoods." They want Lillian to run for office. And here's where Unbreakable Kimmy Schmidt reveals its political leanings — the show is left wing enough to believe that only governmental intervention can slow down the corrosive process of gentrification. Lillian's story arc ends on a hopeful note — not just for her, but for New York's few neighborhoods that are affordably priced enough for people like Titus and Kimmy to live in.

Sure, gentrification is a very real threat, the show seems to say: but it's also one that we can beat, with the right backing. And just like that, Unbreakable Kimmy Schmidt levels up: it's not just a wonderfully eccentric comedy, but a show that's passionate and convincing about politics without sacrificing any of its jokes in the process.