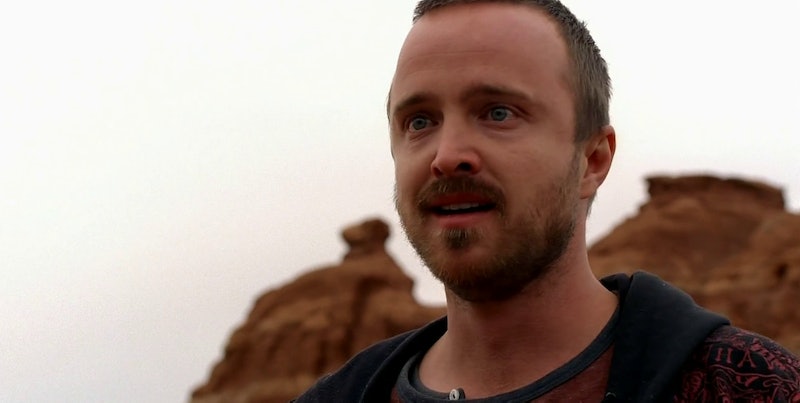 With the stupendous second season of Better Call Saul having just finished on AMC, it's no surprise that we've all started to get a little nostalgic for Breaking Bad again, only three years after it ended. And if you thought that Breaking Bad fans had it, well, bad then spare a thought for the poor cast of the show who are still clearly not quite over the series ending either. Following an appearance on Late Night with Seth Meyers on Friday in which he discussed which props he stole from the show, Aaron Paul shared a Breaking Bad prop that he stole from set on his Instagram (which we can only assume is one of many), and it's pretty incredible.

It goes without saying that if you're currently marathonning your way through Breaking Bad for the first ever time (and I truly envy you if that's the case) that you might want to stop reading in order to avoid one gigantic spoiler. For the rest of us, brace yourselves, because Paul is in possession of Gus Fring's post explosion head and it's everything a fan could dream of. Gory and staggering for it's horrifying attention to detail, this is one prop that you have to give Paul props for swiping:

For some people, this Breaking Bad prop may be a touch too macabre for their tastes, and not exactly the sort of thing they'd feel too comfortable sharing a home with, but they'd be missing out. This prop is more than just an excellent way to scare off unwelcome guests or to horrify the neighbourhood by placing it in your front window, it's representative of a key moment and character in TV history and of the incredible workmanship of special effects teams. Let's break down exactly why Paul would want to steal this Breaking Bad prop:

1. It's Representative Of One Of The Most Shocking Moments In TV History

The episodes leading up to "Face Off," the Breaking Bad episode in which Gus Fring is killed, were so slow paced that fans of the show weren't too happy about it at the time. But, in typical Breaking Bad fashion, that level of pacing was all deliberate and providing the build up to one of the most shocking and unexpected moments in TV history: Gus Fring walking out to reveal that half his face had been blown off.

The effects apparently combined the prosthetic head which is now in Paul's possession, a great deal of makeup and digital work to produce the horrifying end result, all of which took about three months to get right.

3. They Received Help From The Team Of AMC's The Walking Dead

I mean, who else you gonna call? Gilligan told the New York Times that the genius prosthetics team of The Walking Dead (and specifically, special effects MVPs Greg Nicotero and Howard Berger) provided a great deal of help in creating the final look of Gus Fring's half exploded head. Which probably goes a long way in explaining how they managed to maintain so much realism with the final result.

4. The Scene Required Three Hours Worth Of Makeup On Actor Giancarlo Esposito

Esposito revealed that the makeup process was meticulous but absolutely worthwhile, describing in an interview with MTV how essential the process was to achieving the impact that it eventually had on the audience:

"I got my head cast. That took about an hour to get all the stuff lined up in terms of how to create the mask on my torso. It took about two, two-and-a-half, three-hour makeup to get all that on me ... it was an quite extensive process. Not just a mask out of a store for Halloween ... It had to be something where your mouth would drop and you would look at it and say 'Oh my God. That is so real,' and that’s something we’ve never seen on television before."

5. It's Also Representative Of The Show's Attention To Detail

Whilst you can clearly admire the attention to detail which went into the special effects, makeup, and prosthetic creation for the scene, it's the final moments of Fring's character which really add that sense of space and personality to the scene. This was a thorough attention to detail which Breaking Bad became renowned for provided for all it's characters and story lines. Esposito explained in an interview with Time Magazine how important it was that the character be so particular in his manner during his final living moments:

"[Fring is] fastidious and well put together ... We came to agreement that allowed me to be particular. We both thought it would be like Gus to survive an explosion for a few seconds and that in those few seconds he would button his jacket and straighten his tie — then just keel over and die..."

6. It Was Part Of A Scene Which Took 19 Takes To Get Perfect

Gilligan's love for being precise with detail is certainly what made Breaking Bad stand out from the crowd, and this scene in particular was no exception, with Gilligan told the New York Times' Arts Beat Blog:

7. Because Gus Fring Was A Monumental Character

Like many the majority of Breaking Bad characters, Fring was fascinating for his complexities. Flawed and often even terrifying, Fring was a character who somehow managed to solicit empathy and even fandom from the Breaking Bad audience, who could also fear and loathe him in the same scene. Fring's death, as a result, was both devastating and also deeply satisfying; how often can you say that about many other TV characters deaths?

The prosthetic head of half-exploded Gus Fring is the ultimate grotesque trophy for Paul, who let's face it, must be the biggest fanboy of Breaking Bad who ever had a starring role in the show. And any time he fancies inviting me round for a beer to let me see it in real life is totally cool with me; I'll be awaiting that invitation with great anticipation.