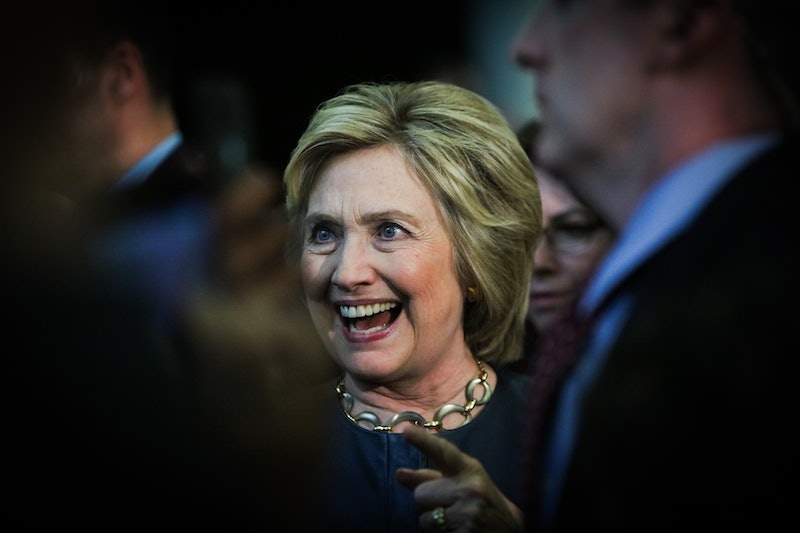 Saturday Night Live has always supplied some of the most biting political commentary, especially during the presidential election. And the NBC late-night sketch show has continued to do so on Saturday night. The Saturday Night Live "President Barbie" sketch parodied the Hillary Clinton campaign and the democratic candidate's struggles as a female running for office. It was a harsh, but true statement about feminism and Clinton's lack of support in some circles — but told using a Barbie dolls and young girls who'd rather play with a dirty old broom. For real.

The Barbie parody is in the same vein of SNL's previous "Asian American Doll" Barbie sketch, which was a satire about diversity. "President Barbie" satirizes all of the criticism that has been thrown at Clinton throughout her campaign to be the first woman president. In the sketch, the voice over introduces a group of young girls to the brand new doll, but they just aren't that interested in her, preferring to play with Legos. But the voice over keeps trying, adding Snapchat to the doll's package. The young girls don't buy it and think she's trying to hard. "I bet you would like President Barbie if she smiled more," the voice over says. The girls don't care. "Don't you get it there was a time when Barbie couldn't even be president?" The young ladies shrug and would rather play with a plain old broom (which could be a metaphor for Bernie Sanders?).

The sketch ends with a mom (guest host Brie Larson) coming in asking why they aren't playing with President Barbie. "Because we don't have to!" the girls scream in unison. It's so sad, but true. In the past and during her current campaign, Clinton has received much flack for her social media presence, pandering to voters, her pantsuits, smiling, her hair — you name it. But there's something very unsettling about seeing an all-women sketch — as well as little girls — commenting on how all of these criticisms and comments could take away from Clinton being seen as a role model by the next generation. People shouldn't be lessening the achievements of someone who is so close to the presidency, but for some reason, people are.