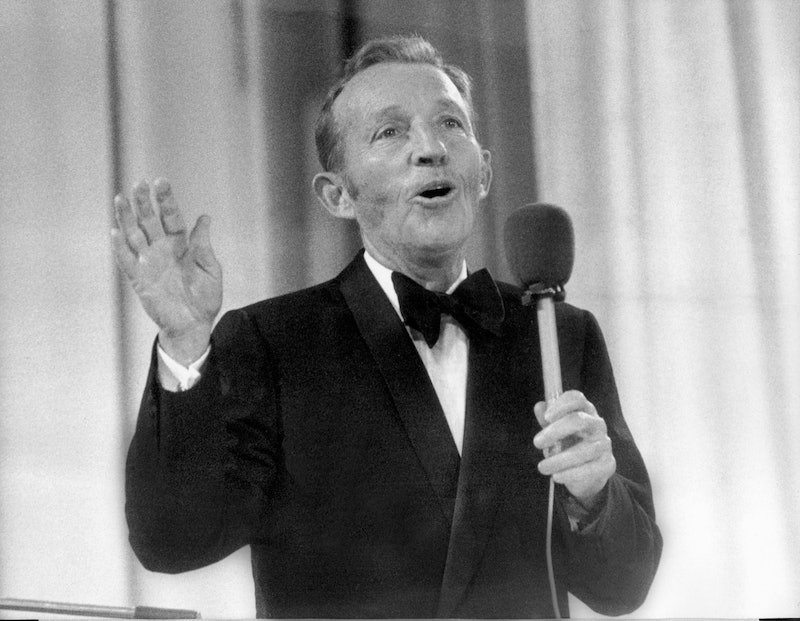 If you ever wondered what the stars of yesterday would sound like covering today's hit songs, Saturday Night Live has you covered. You know all of those Kidz Bop commercials and compilations that are always being advertised? In that vein, Saturday Night Live featured the sketch Dead Bopz , a compilation of contemporary songs covered by legendary deceased artists like Tupac Shakur, Eartha Kitt, Roy Orbison, and introduced by a hologram of Bing Crosby. Usually, artists cover older songs, but in this case, older dead artists are covering today's music and it's so funny.

The sketch was the funniest of the night and was saved to be the last of the episode. Like I said above, Bing Crosby (as a hologram) introduces the Dead Bopz collection, featuring contemporary songs sung by artist holograms, because why not? Some of the highlights include bass singer Paul Robeson singing Fetty Wap's "Trap Queen," Ethel Merman covering Selena Gomez's "Hands To Myself," Eartha Kitt singing Rihanna's "Bitch Better Have My Money," and Roy Orbison's take on Justin Bieber's "Sorry." The highlight of the whole sketch, though, was Jay Pharoah's impression of Tupac singing Taylor Swift's "Shake It Off." Sure, it may sound hilarious, but let me tell you, it's way more than that. It was brilliant, strangely perfect as a rap song, and slap-your-knee, laugh-out-loud funny. I won't stop laughing about that amazing impression for awhile.

The sketch let the SNL cast's impression and musical skills shine — even guest host Brie Larson got in on the singing fun as Lesley Gore singing a Nicki Minaj song. Dead Bopz was so hilarious and so catchy that many Twitter users decided that the hologram album song compilation needed to be a real thing.

I can only hope Dead Bopz becomes a recurring sketch on SNL, because the possibilities for hilarity are endless.