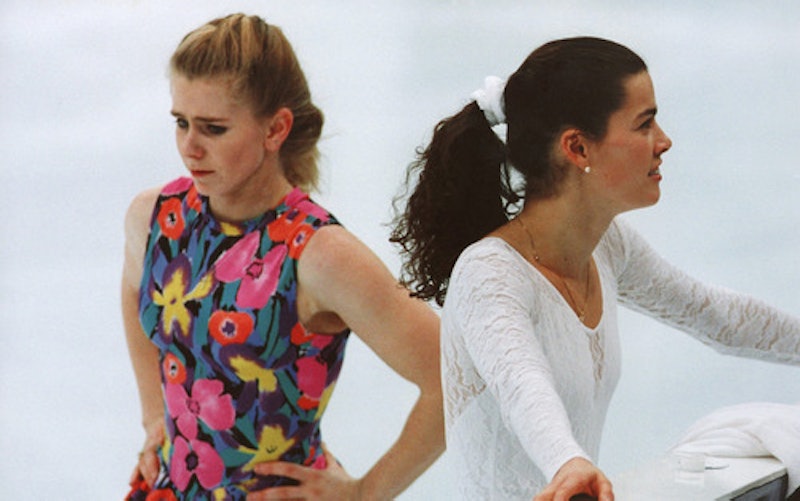 NBC sure knows how to end the Olympics on a happy note. This year on the night of the Closing Ceremony they plan to air a 45-minute retrospective showcasing one of ice skating's biggest tragedies: the Tonya Harding/Nancy Kerrigan scandal. For those of you who don't know, it was an event that happened during the 1994 Olympics where Harding's ex-husband and some friends hatched a plan to take Kerrigan out of the competition by hitting her and injuring her knee just before the Olympic qualifiers. What happened after that was watched by the whole world as the plot unraveled and Harding was placed under suspicion and Kerrigan had to intensely retrain to be ready in time to compete and still lost out on the gold medal. It made for great TV, but it wasn't so great for the two athletes.

So why, on a night dedicated to celebrating two weeks of amazing athletics is NBC deciding to re-hash one of the competition's lowest moments? It's not for either skater's benefit.

Especially for Harding who has discussed how devastating it was to be suspected of conspiring in the event. She's maintained her innocence since the attack, but is often thrown in with the men to actually committed the crime, and many believe she's still guilty. For Harding, the time was traumatic for her, after all her hard work making it to the Olympics the intense scrutiny placed on her eventually led to a series of breakdowns and she didn't even finish on the podium in the competition. After the Olympics she was banned from ever competing in the sport again. Certainly NBC making money off her failure has to sting. "It was 20 years ago," Harding has said. "We both have gone our separate ways. Get over it, okay? It's 20 years. I’m sure that she’s done and I am too."

But while it's understandable that Harding wouldn't enjoy such a retrospective on an event that she's worked hard to distance herself from, but Kerrigan doesn't appreciate it either. "I really don't look back unless someone asks me to look back, and then I have to," she said recently. "Otherwise, why would I? I was attacked."

But every Olympics the story gets dragged out again and Kerrigan has to re-live the traumatic experience. This year NBC has ramped things up a notch and made it the focal point of the ending of the Games. Taking a night that is supposed to be about the celebration of these athletes and making it about a terrible tragedy is a selfish way for NBC to capitalize upon people's interest in drama, especially at the expense of these two talented former-skaters. But I guess it's to be expected, because why be decent when you can make money?