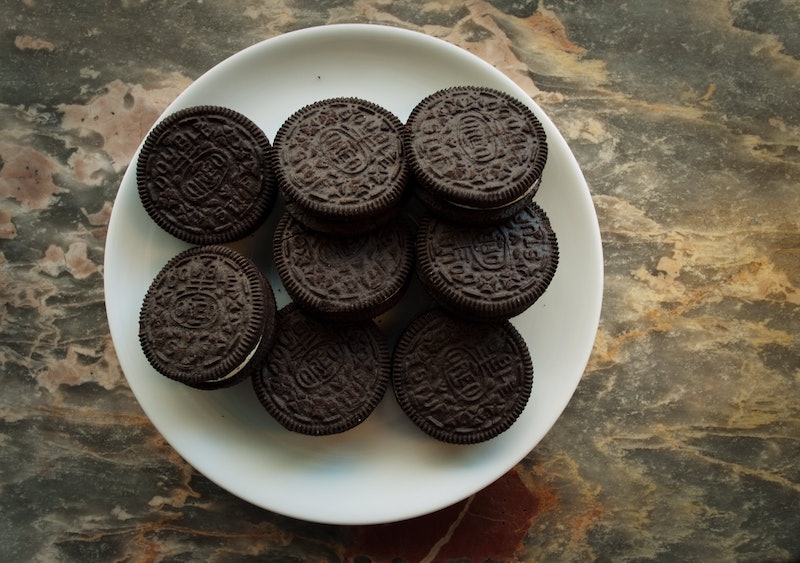 Bagel gods — well, New Jersey's Bagel Nook — you've done it again. Today, I introduce to you the Oreo bagel, a heart-stoppingly glorious combination of everything that is delicious in the world, aka Oreos, cream cheese, and bagels. (What else were you expecting?) Created by the geniuses of the Bagel Nook in Freehold, New Jersey, the bagel's real name is the Oreo Overload, and its creation immediately caught the attention of Instagram.

True to its name, the Oreo Overload has approximately a bajillion ingredients going on: According to Metro, it features a vanilla-chocolate swirled bagel, cookies and cream-flavored cream cheese, and intact Oreos in the middle. Yes, you read that correctly — there are actual, unaltered Oreos chilling on top of a layer of Oreo-flavored cream cheese. To be honest, just looking at a picture of the bagel is enough to send me scurrying off to my dentist for a preemptive appointment, but judging from the adulation it's received online, the foodies of Instagram have no such qualms. Over the course of a single day, the Sweets and Sunsets Instagram post about the Oreo Overload has received more than 13,000 likes and 300 comments, and Twitter is equally in love with the idea.

Admittedly, some people are less enamored when they realize it's only available in New Jersey...

...But others say it's totally worth it.

According to its website, the Bagel Nook has sold "micro-batch" cream cheeses before, including Maple Bacon, Birthday Cake, and Jalapeno Cheddar. They don't stop at bagels, either; the website lists similarly unique menu items like Chocolate Chip French Toast and the Inside Out Donut. Needless to say, the Bagel Nook's Instagram page is enough to get even non-foodies salivating — especially this photo of a tie dye bagel with birthday cake cream cheese. Someone buy one for me immediately, please and thank you.

So, to recap: Oreo bagels exist, and the world is a wonderful place.