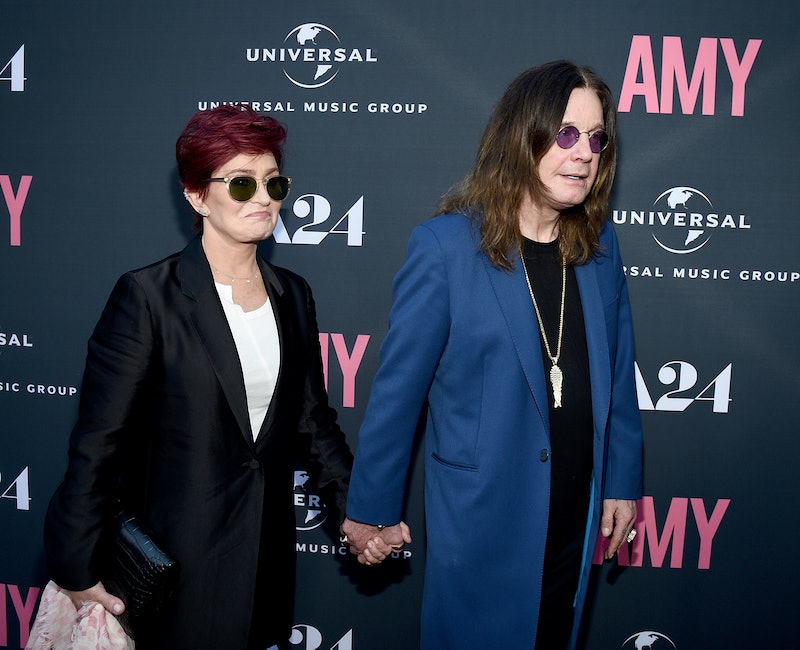 Sad news, Osbourne fans. According to E! News, Sharon and Ozzy Osbourne are splitting up after 33 years of marriage. The duo have three adult children together, and were married in 1982. A source told E! that the couple agreed that the rocker famous for "Crazy Train" (and decapitating a bat with his mouth during a show) would move out of their shared home temporarily. This source also claimed that the divorce was not related to Osbourne's previous alcohol and drug addictions, as he has been sober for three years. Bustle has reached out for comment to the Osbournes, but has not heard back at this time. Update: On The Talk on Tuesday, Sharon confirmed that she and Ozzy are separated, but is unsure whether they will stay married.

Earlier: The Osbournes have known each other since the early '70s when Ozzy was in Black Sabbath and Sharon soon became his manager. The duo, as well as two of their children, Jack and Kelly, later starred in a popular reality show about their lives, The Osbournes, from 2002-2005. In 2013, however, rumors of divorce started brewing, but both Osbournes refused to give any credit to the rumors. In fact Sharon said on The Talk, "The only thing that's true was the Facebook posting that my husband did on his Facebook where he said he's been using alcohol and prescription drugs for the last year and a half...and that he has been in a very dark place."

Now, however, the duo could be splitting for good. Still, it's unknown if the reports are true, and if Sharon and Ozzy are heading to divorce. In a relationship that's been going on that long, there's bound to be some road bumps, but that doesn't mean that the duo are definitely over. Still, it's not promising — Perez Hilton claims that Sharon caught Ozzy cheating with Michelle Pugh, a hair stylist to the stars. But that rumor is not confirmed, and the only people who really know what's going on with the Osbournes are them. All fans can do is wish them well, and hope for the best.