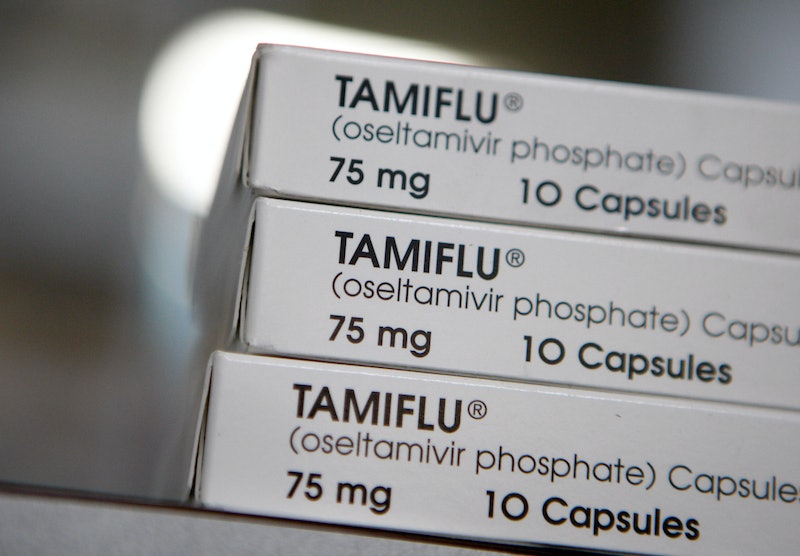 Very recently, I died of the flu. Like, died-died, like this story is being written by a ghost. Haha, ghost-written. Get it?! OK, I didn't die from the flu, but it's possible that a good portion of my brain (the jokes portion, specifically) is still under the woozy influence of cough syrup. Sadly, my soon-to-no-longer-be-long-distance boyfriend was visiting that weekend, which is so annoying because seriously? Seriously?!

I mean, I banged him anyway.

You know I did. I'm not one to let a medium-grade fever, a leaden, congested head, muscle aches, bone-rattling coughs, and wads of phlegm stand between me and some good sex! Really, the next time you're presenting with major death rattle, you should see if a roll in the sack improves your symptoms at all, even though no doctor would likely recommend it. Here, let me get you started with these super-legit, experiential flu-sex tips. Note: most of these are geared toward people in a relationship, but if you're single and you can stagger out to a bar, just drink two hot toddies and THEN follow the list below.

1. This is your opportunity to be so, so lazy during sex.

In between glugs of orange juice and hazy-eyed Netflixing, I announced to my kind and patient boyfriend, "You know, I think I could have some sex right now. I might be up for it, if, like, you did all the work."

It was awesome! I got to lie on my back and just mostly chill there for awhile, like the kind of dead-fish lay people always complain about, but would probably prefer to no lay at all. And, really, it was way funner than marathoning a million TV shows. I do not say such things lightly; some shows, honestly, are better than sex.

2. Skip out on oral (giving, not receiving).

Oh, really? You're going to put your face in someone's crotch when you haven't been able to breathe through your nose in like three days? Sorry, but your partner's orgasm is not worth SUFFOCATING over. You, however? Are a perfectly good orgasm recipient.

So, TLDR, if you were wondering:

INDEED, IT IS NOT. (And neither is a [equally goofy euphemism for "vagina" here.])

Sore muscles? Add a massage to foreplay. Clogged sinuses? Some kind of upright position (doggy-style or something similar — girl-on-top is too much work) is probably better for you. Freezing cold? Burrito yourselves in eleven fleece blankets. Eleven sexy fleece blankets.

4. Keep your various pills, syrups, and medical accoutrements on hand.

Look, there is nothing wrong with needing to stuff a tissue up your nostril or snort some Afrin in the middle of sex. This is your life right now, and your partner should take you as you are, just like in that RENT song that I like to loudly sing to my boyfriend when he gets a little uppity about my lack of cleaning skills. Anyway! Consider yourself warned — for better or for worse, if you're too doped up on Nyquil before you get down to business, it's gonna feel like this:

5. With flu-sex, post-play is even more important than foreplay and play.

The greatest thing about being sick is that you can be as sniveling and mopey and needy as you want, and no one can really say anything about it, least of all your S.O., who is fairly required to care for you. Figure out a nice way to ask for the various things you may need after sex — help showering, water, hot water with lemon, an ice-cream sundae, whatever. But, because they're being super-good to you, and that they're risking illness to take care of/sex you, throw them a bone and let them know that you're pretty sure they actually banged the flu out of you. What? People love to feel like they have magical healing powers.