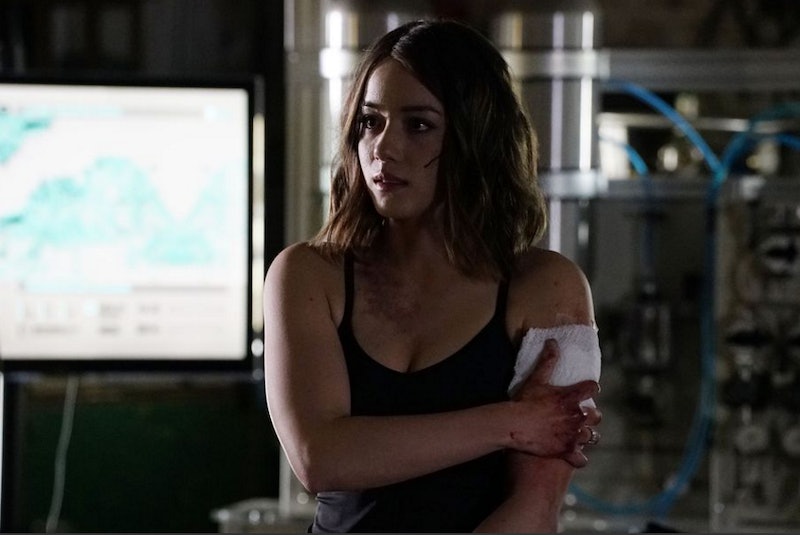 If your weekend was anything like mine, you've been in a tailspin since seeing Captain America: Civil War. The big screen side of the Marvel Cinematic Universe had a huge week, with most of the Avengers and a few friends facing off against each other over the restrictive Sokovia Accords. For the past several years, some waves made by characters in Marvel features have rippled onto the small screen, most notably with Agents Of S.H.I.E.L.D being affected by Avengers movies. The characters on S.H.I.E.L.D. are well aware of the battles for New York and Sokovia, and surely word will reach them about the Avengers divide. But will their worlds always be somewhat separate, or will an Agent be called up to join the ranks? She'll need to be de-Hived of course, but the best candidate for this job is the leader of the Secret Warriors. As one of the show's most powerful Inhumans, could Daisy Johnson ever join the Avengers?

Before that pesky parasite took over her brain, Daisy Johnson proved herself to be an incredibly valuable field agent and a champion of enhanced individuals. (She definitely would have fought for Team Cap, right?) S.H.I.E.L.D. itself is in a shambles — that's true across Marvel movies and TV — and Daisy was weathering that turmoil just fine until the zombified husk of Grant Ward came back into her life. What I'm trying to say is that the lady isn't just powerful. She's loyal. She has a backbone. And she has principles; she'll even go up against her friends and surrogate father figure Phil Coulson if she thinks she's in the right. Sounds like Avengers material to me.

Another tick in the Daisy-as-Avenger box is that there is text to support that choice. Daisy Johnson, aka Quake, is invited to join the Avengers by none other than Captain America in the comics after fighting alongside them a few times. (Cap knows how to scout talent.) But the MCU doesn't religiously follow the character paths laid out by the comic books, so it's possible that this invitation will never come.

The strongest argument against adding Daisy to the Avengers line-up is logistics. Recently, Joe Russo, one of the directors of Civil War talked to BadTaste.it (via ComicBook.com) about folding characters from Marvel TV properties into the upcoming two-part Avengers film, known for now as Infinity War. "The Marvel Cinematic Universe is enormous. Just think of all the characters that haven't been introduced yet that are going to be introduced by the time that we're working on Infinity War," Russo said. But fans looking for crossover shouldn't give up all hope. "It's certainly something we're considering," he teased.

Daisy Johnson actress Chloe Bennet won't be turning down that call if it ever comes. In a recent interview with Teen Vogue, the actress said what every superhero actor and fan is thinking most of the time. "I can’t lie," Bennet dreamed. "It would be so cool to fight alongside the Avengers." Sooner or later, she might just get her chance.