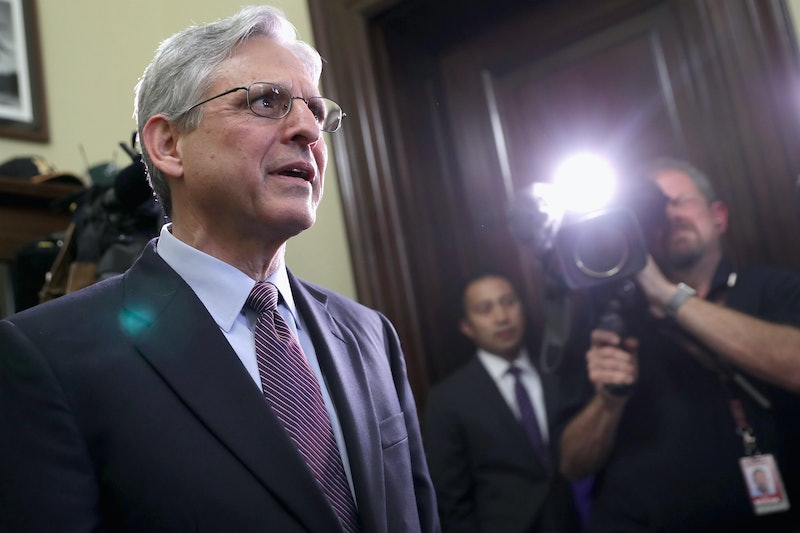 Since Trump's de facto coronation as the presumptive GOP nominee last week, it looks like President Obama's nominee to fill Antonin Scalia's seat on the Supreme Court could get the green light sooner rather than later: Will Merrick Garland's confirmation get fast-tracked? There's now a popular movement to put pressure on the Senate to give Garland the go-ahead as soon as possible, and the reasons why are pretty convincing. The "We Need Nine" social media campaign in drawing attention to the potential for disastrous political consequences if the ninth seat on the Supreme Court remains vacant.

While the Supreme Court hasn't always had nine members, the importance of an odd number of judges cannot be overstated. An even number of judges means that a tied decision is bound to pop up eventually.

The consequences of a hung court range from the banal to the potentially civil-war inducing, depending on the case on the docket. For example, and this isn't outside the realm of possibility, what would happen if the winner of the 2016 presidential election had to be chosen by the Supreme Court (like in 2000) and there was a tie? Good luck dealing with that one. I'll be observing online from an undisclosed location somewhere safely on the European continent. Or maybe, Mars.

So, the main holdup on Garland's nomination is located in the U.S. Senate, and could be described as vaguely turtle-shaped. Senate Majority Leader Mitch McConnell of Kentucky also happens to have been the latest member of the GOP to endorse the former reality show host. Keep in mind that McConnell has steadily identified more with the Tea Party wing of the GOP and, along with Speaker Paul Ryan, has thrown his weight in with the chaos wing of the Republican Party. Just because they are backing Trump, that doesn't necessarily mean that "Tiny Hands" has the establishment vote on lockdown.

But it's not good news for Garland's nomination, Obama's legacy, or the dockets in front of the court. For that matter, it's not good for the people of this county. We deserve a functional court that is able to make definitive judgements in the most pressing legal issues facing this nation. The basic business of running the country should never be sacrificed at the altar of partisan politics. But frankly, we've passed that point long ago. If the President is able to get the court back up to capacity, it will be a coup de grace to close out his term. Should he fail, well, it's pretty obvious who is really at fault here. Hint: it's turtle-shaped.