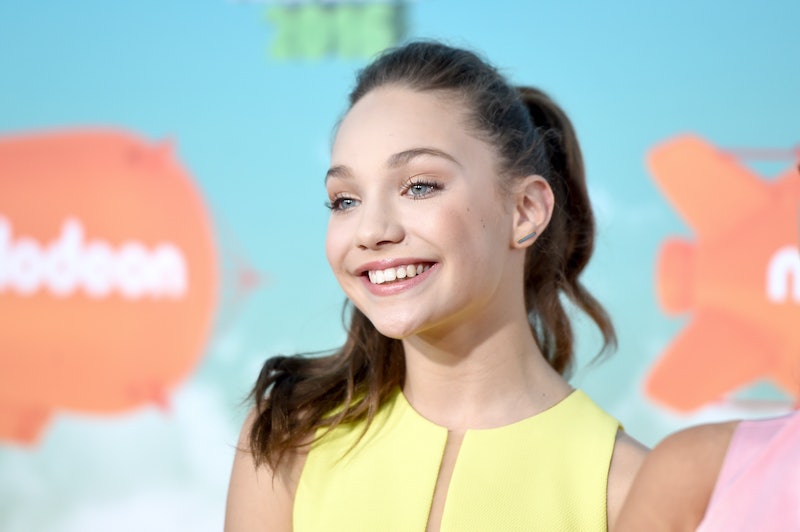 On Dance Moms, Maddie Ziegler was the undisputed star of the series, and eventually left the show in order to pursue her own career. But, what has Maddie been doing since leaving Dance Moms ? I don't even know where to begin, because Maddie has been incredibly successful as a dancer and at maintaining the fans that she gained as a part of Dance Moms. Clearly, it's not just Abby Lee Miller's yelling that drew people into the show, because Maddie quickly became the breakout star of the show. And, if you were worrying about whether or not her departure from the cast will mean and end for Maddie's career, you shouldn't — because she already finished filming Season 6, and has plenty of new things that she'll be doing in the rest of 2016.

According to the latest episode of Dance Moms, both Maddie and her sister decided to leave the show... and it's a good choice, since they're outgrowing the series. The rest of the cast might still be working on their dance skills in order to develop their careers outside of the show, but even though she's still only thirteen, Maddie has already made her name as a dance expert as well as a sought-after dancer in film, music, and TV. The remainder of Maddie's time on Dance Moms is limited, but the possibilities beyond her role on the Lifetime series are endless.

There was a lot of drama surrounding Maddie's Dance Moms departure, including whether or not Abby was spending enough time with Maddie as she prepped her solo dance. But, that didn't stop her from having a beautiful final performance.

She's A Judge On SYTYCD

Fox announced that Maddie will be a So You Think You Can Dance: The Next Generation judge, which is a smart choice considering not only her dance skills, but also her reality TV experience. She might be the most uniquely qualified judge on the panel.

Maddie has now appeared in several Sia music videos — and since the singer does not prefer to appear on camera, Maddie is almost like Sia's avatar in her music videos.

According to Teen Vogue, Maddie and her younger sister, Mackenzie, have partnered with DoSomething.org in order to become the faces of their "Birthday Mail" campaign, that encourages people to send birthday cards and gifts to children who are experiencing homelessness and living in homeless shelters.

She's Going To Be A Movie Star

Maddie's first movie role is a big one: in Colin Trevorrow's The Book of Henry , a mysterious drama where she costars with Naomi Watts, Lee Pace, and the Internet's little brother Jacob Tremblay. The film finished shooting in late 2015, but Maddie will be promoting the film and being introduced to a whole new audience when The Book of Henry is released.

And Maybe, Appearing In Another Abby Lee Project

At least, that's what Abby is claiming — that Maddie may work with the Dance Moms instructor on another TV or online series. In a YouTube Q&A, Miller said, "hopefully were going to be working on another project that you might just see on your television screen [or] even your computer screen in the future. Keep your fingers crossed."

So, there's no shortage of places you'll be seeing Maddie Ziegler throughout the rest of 2016 and years to come, regardless of her departure from Dance Moms.