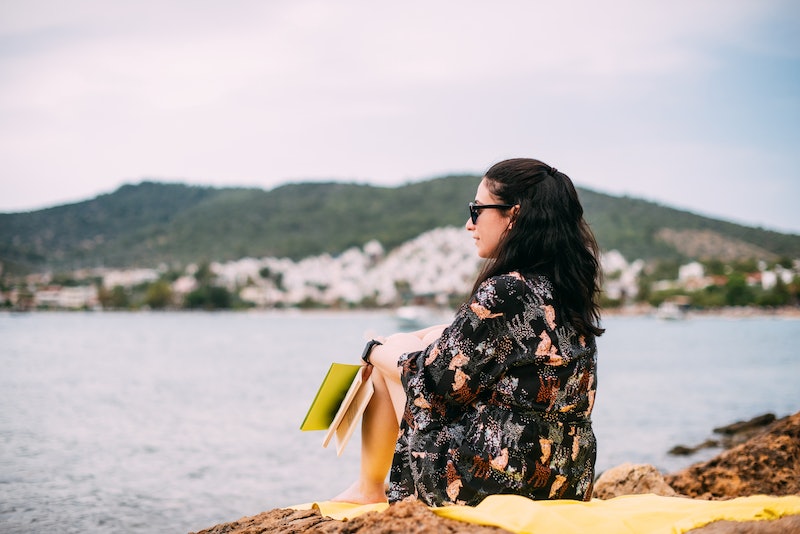 Chances are strong that, if you have an anxiety disorder, whether it's obsessive-compulsive disorder, generalized anxiety disorder, or something else, you'd do quite a lot to make it go away. Which is exactly why the idea of a permanent cure for anxiety is so tempting. If there is something that could take away your malfunctioning brain's difficulties forever, it's worth trying — right?

Well, the notion of permanent recovery from an anxiety disorder is more complex than it sounds; some people, according to the American Psychological Association, "are able to reduce or eliminate their anxiety symptoms and return to normal functioning after several months of appropriate psychotherapy" (which is one of the big treatments for anxiety disorders), but that doesn't apply to everybody. Disordered anxiety is a complicated thing, and while you may be drawn to the magical cure advertised with such glamor on Twitter or a friend's Facebook, it may not offer exactly what it promises. So is a "cure" the right thing to be aiming for?

Science hasn't yet developed a tool to delve into the brain and change the patterning of people suffering from anxiety disorders, though I'm sure the sign-up list would be pretty long if it did. Anti-anxiety medication can do some of the work, but it's not commonly regarded as a complete solution. Which means that, for desperate people with serious issues, the notion of a cure-all is incredibly tempting. Unfortunately, the likeliness that you'll live a life free of anxiety issues depends heavily on many things, and whether you click on that banner ad promising a miracle is not one of them.

Here's what we know about anxiety disorders, the notion of the cure, and the difficulties of medicalizing mental issues.

Can Anxiety Cures Ever Really Be Permanent?

Surely if you try hard enough, work through enough therapy, and understand yourself sufficiently, you can defuse your anxiety permanently. Maybe you can use certain products or calming natural remedies to rid yourself of the entire issue. Right? Well, it's a tricky question, for various reasons. Anxiety disorders come in many forms, and can often be well-tackled with good therapy, medication, exercise and other treatments; but whether we can promise everybody a "cure," a life entirely free of anxiety disorder symptoms, is another thing entirely.

The Anxiety And Depression Association Of America has an explicit warning on its website about the scam potential of anxiety "cures"; it's become enough of a problem that they've had to warn people away from false hope:

Many anxiety "cures" are targeted at the immediate: calming yourself down right now, using things like camomile tea, meditation, passionflower, or a bath. All of these are perfectly valid approaches; the Mayo Clinic lists a variety of herbal supplements whose scientific impact on anxiety levels requires more testing, but may produce possible anxiety-dampening effects. The problem with this should be evident: the nature of an anxiety disorder is often chronic and recurring, and focusing on the symptoms will likely not target the underlying issue.

Other, longer-term therapeutic solutions may have more success. Exposure therapy for people with phobias, for instance, has been shown to help some people overcome their fears completely, while studies have shown that the practise of mindfulness (a kind of meditation) may have real therapeutic impact for anxiety sufferers. A 2013 study showed that mindfulness appears to reduce anxiety at a neural level, though the test wasn't done on people with anxiety disorders. But as for the silver bullet that kills anxiety dead in 100 percent of cases: well, we haven't found it yet. And we may never do so.

Why We Need A Little Bit Of Anxiety To Function

Anxiety is actually not something to be completely dismissed from a healthy nervous system, which is why we can't just eliminate it completely and consider "problem solved," except in the most extreme cases. The Cleveland Clinic calls it "a natural response and a necessary warning adaptation in humans"; in other words, we wouldn't have survived this long in human history without a dose of anxiety to keep us aware and on our toes. The fight-or-flight response associated with panic attacks is rooted in the body's adrenal system, which responds to threats by pumping blood and making us capable of taking on whatever threat is coming at us.

Anxiety at a normal level is linked to high performance in stressful situations like exams: worrying about potential outcomes and being highly aware of your surroundings is a fairly good strategy in a high-pressure scenario. A little bit is not only a survival mechanism, it's also the brain's attempt to help you out. It's only when anxiety becomes overly-powerful and uncontrollable that it presents difficulties, so eliminating it altogether isn't really a solution in the first place.

Is It Dangerous To Talk About Cures?

There's another issue to discuss here: whether thinking about anxiety, or any mental disorders, in terms of "cure" or "recovery" is actually helpful, or a misconception of the realities of mental problems.

The medicalization of mental health has, in many ways, been a good thing. It's helpful for people to comprehend mental health difficulties as, say, comparable to a broken leg when asking them to contemplate the real, physical obstacles of a serious brain issue. But there's a limit to the analogy, and that's the fact that mental health problems are extremely individual. Some may fade over time, others may go through phases of severity, and still others can be with the person for life. If they're going to be compared to anything physical, possibly mental health problems are most similar to a chronic pain condition, with highly individual details, a very unclear future, and a focus more on management than on "cures".

The other big problem with conceiving of all mental issues as "curable" or requiring "recovery" is that it creates a sense of failure. If you haven't "gotten better," you're bad at having a mental illness and aren't trying hard enough. (This type of thinking will be particularly familiar to depressives, who can often include guilt at being depressed among their many self-castigating thoughts.) The range of mental illnesses is incredibly vast: from schizophrenia through bipolar disorder to anxiety and PTSD. And the reality is that, for those whose nervous systems create these particular conditions, the notion of a "cure" is sometimes not a valid one. Management may be very effective, therapy and lifestyle changes and bodily ageing and whatever else mean there's never a recurrence, and that's often as good as you can hope for.

Keep this in mind when you're thinking about your own anxiety disorder and wanting to throw it out the window: that magical technique offered by a friend/Instagram/whatever may well have worked in specific instances, but it very likely can't be applied universally. Always check the research and discuss all possibilities with your GP and mental health professional before you embark on any new mental health regiment; and if you do strike it lucky and manage to live anxiety-free, don't go around preaching a cure to people who may be very different to you.

More like this
How Ovulation Affects Your Sense Of Smell, Libido, & More
By JR Thorpe and Lexi Inks
The Beauty Device Kristen Bell Uses Every Single Morning
By Carolyn Steber
An Expert Weighs In On The Viral Raw Carrot Salad Trend
By Alexis Morillo
Here’s What Health Means To People In 2023
By Isabella Biedenharn
Get Even More From Bustle — Sign Up For The Newsletter
From hair trends to relationship advice, our daily newsletter has everything you need to sound like a person who’s on TikTok, even if you aren’t.